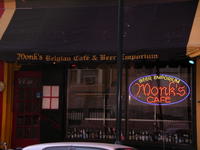 Wow! Where to begin? For starters, my good friend Mark and his wife Susan centered an East Coast visit from Madison, WI around this beer dinner. So, that should tell you that this dinner was an event not to be missed. I've been procrastinating other posts regarding my "NYC pub tour," but last night's dinner at Monk's has spurred me to action. And, I promise to start posting some reviews from NYC within the next few days.


Anyway, back to last night. The owner, Dominique Firart, of Brasserie St. Feuillien in Belgium was in the States primarily for this beer dinner. She arrived last weekend and spent some time in NYC before coming to Philly. Suffice to say that she is a very pleasant and engaging woman who took the time to speak with everyone at every table.....and not just pleasantries. 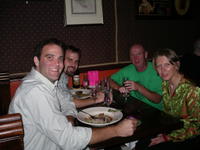 She was interested to meet each person, learn a little about their background and beer preferences, and share some of her own stories.

Her company brews two major lines of beer: St Feuillien and Grisette. Under the St Feuillien line, perhaps the most recognizable beer is the Cuvee de Noel. It was one of the 6 beers poured at the dinner. The food portion of the dinner consisted of 5 courses. Briefly, they were: 1) Crawfish Soup; 2) Truffled Capon Breast; 3) Curried Monkfish Salad; 4) Sage Pesto Encrusted Venison Loin; and 5) dessert similar to a peach tart (described on the menu as Blanche du Bois).

In a nutshell, the food was awesome and provided a perfect accompaniment to the beer. Also, the pacing of the evening was perfect....not rushed at all. The entire dinner spanned approximately 3 hours; I never felt rushed through the beer or the food. Mark, who has been to many beer dinners at Monk's, mentioned that this is the normal format for a beer dinner at Monk's. It's what I called great Beer Karma. The food was right, the beer was right, and maybe even more importantly the people were right.

To save space, my order of favorites of these beers was 2b; 2a; 1 & 4 (tie); 3; and 5 coming in last. While I didn't dislike the Grisette, it's much more like a lambic, and I'm not that big of a fan of this style. But, paired with the dessert, it was in no way bad. The flavors coming strongly through that Mark and I both agreed on were first, raspberries and second, strawberries.

The Triple was surprising in how differently each of the three versions presented themselves. The first bottle was a nice pleasant entrypoint to the dinner. Very smooth, very drinkable and went well with the cream-based soup. It set the tone nicely for the evening. The second, the draft, while carrying the same malt and hop notes was a bit more lively in the mouth. It seemed to be a good pairing (or offset) to the chicken/capon course. Unfortunately, I cannot say that I remember much of the third version of the Triple. I don't think that's necessarily a bad thing, but perhaps there was other activity at the time or maybe I didn't get a second pour off that bottle to really leave a mark ;-).....not sure, but in any case, keep in mind that I don't have a bad thing to say about the evening, so it certainly was not a bad selection. In hindsight, now that I think of it, the opening of this bottle was a bit of a challenge and a comedy in getting the cork out. Tom Peters, part owner of Monk's almost had to resort to a sword for a lancing. I'm not schooled enough in the "science of brewing" to explain the hows and whys each of the three were so different, but maybe others could opine on the subject.

The Noel was also excellent and reminded of one week earlier at the Hop Devil Grille in NYC (off Tompkins Square Park) where my wife, Patty, and I shared a bottle during our pub tour. Very smooth, malty, and dark in color. The four times I've had this beer have always left me happy. And, last but not least, the Brune. This brown ale, to me, was the most interesting and complex and hence my favorite of the night. It had one of the more interesting "noses" that I've encountered and had a taste that made it hard to put a finger on the dominant flavor(s). We asked Dominique if the beer had been aged in anything special (e.g. oak) and she said "no." Although, she did seem to be a bit guarded with regard to certain details like that. Mark and I both had a difficult time dissecting the beer and left wanting more for a follow-up tasting.

By the way, at one point when Dominique stopped by and asked what our favorite beer was from the evening, she mentioned that from her point-of-view was most happy with the outcome of the draft version of the Triple followed by the Brune. Also in attendance were Fergie Carey (of Fergie's, of course) and George Hummel & Nancy Rigberg of Home Sweet HomeBrew at 21st/Sansom in Philly. So, there we go....my first posting. Took me a while to get started here, but as you can tell I don't have a problem once I get typing :) Prost!

Great post Bryan! I really appreciate the time you took writing this up. I hope you're up to planning the next beer dinner. I can't wait to attend!

Great writeup and very informative. If it didn't make you thirsty and hungry - don't know what will. Byran, ever think of being a food and beverage critic? And to think, the "best" beer that I got to drink tonight was a Yuengling Lager - oh well. By the way believe dinner date was 9/13 not 8/13 - mybe that last beer was still buzzing in your head. Can't wait to hear about next adventure.
Grrreat!

So here we are a week away from the next Monks dinner. Thanks for spurring me on :-)

Why can't it be tonight?!