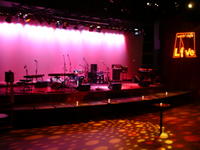 This is only partially about beer. But, I thought this space deserved a mention of a benefit for Habit for Humanity to directly support the victims of Hurricane Katrina. And, not to mention that World Cafe Live in Philadelphia serves great beer, with an emphasis on local brews. This Tuesday night concert was put together rather quickly, but the lineup was an impressive list of artists. Both stages were being used and each artist had approximately 20-25 minutes on stage to perform. For those familiar with some of these artists, you should agree that $15 admission for the entire evening was well worth every penny. Here's a quick listing of the artists performing. I must admit, though, that we did not stay for the entire evening, which ended close to midnight.


Downstairs
-Lauren Hart, fabulous as usual, a "real" local sweetheart, daughter of Flyers legend Gene Hart
-Ben Arnold, legendary Philly songwriter
-Joseph Parsons
-Lili Añel, wow! where did she come from? she's been in Philly for a little over a year and making quite a splash as we learned
-John Francis
-Birdie
-Lelia Broussard, young up-and-coming with a beautiful voice
-Patrick's Head, Irish rockers you've gotta see
-Susan Cowsill, displaced from their New Orleans homes and playing with mostly borrowed instruments; she and her band ROCK, hope to see them sometime soon back in New Orleans; until then, it looks like they have a nice little tour going on around the country
-The Brakes 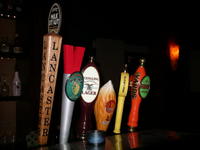 Now, to the beer. WCL has hosted an event in the past called Blues & Brews and has proved to be a respectable venue for beer as well as music. Case in point: last night on tap they were serving Lancaster Milk Stout, Flying Fish Oktoberfest, Yards Saison, Yuengling Lager, Victory Prima Pils, and Sly Fox IPA. The bottle list is extensive and offers variety ranging from Rogue to Chimay and quite a bit in between.

However, my one pet peeve which really tweaked me the wrong way was the glassware policy. Apparently, the policy is to serve draft beer in glassware at the bar but in plastic cups if you are not drinking right there at the bar. The policy, though, has its holes and appears to be enforced at each person's whim. What started me on this rant was the overwhelming plastic taste that the cup imparted on the beer. Imagine trying to drink a Milk Stout and tasting an overpowering flavor of burnt plastic. I'm not sure if this speaks to the quality of the plastic cup, or if any plastic cup would act the same way. In any case, the first bartender I mentioned it to said that he completely understood and immediately offered me a glass (his reaction made it sound like I wasn't nearly the first person to complain about the plastic cups). The next bartender seemed much more apprehensive when we ordered a beer to take away from the bar on to the floor in front of the stage. Now, I can understand that this policy makes sense if the mosh pit is in full session. However, for this benefit concert, the crowd was quite sedate and the main floor in front of the stage had no more than 25 people on it. Plus, there were a couple of martini glasses floating around in this area as well as several beer bottles (consistency of enforcement?). Finally, when I ordered another beer from a waitress in this general admission area, she was very sure that she would not be able to serve me a glass of beer, even after I pointed out the other glassware on the floor. She even mentioned how she just served wine in a plastic cup. I noticed the angst on her face and also of the bartender (a third one) that she discussed it with. I mentioned that I would be drinking water the rest of the evening if she wouldn't serve it to me in a glass. Fast forward to the end of the story....All's well that ends well, and I received my beers in a glass for the rest of the evening.

So, what's my point here?! I don't think you have to be a beer snob/geek to ask that beer be served in a manner that allows it to taste the way it's supposed to taste. And, I'm not even talking about one style of glass versus another. For that matter, I could be talking about wine, whiskey, food, or whatever. In my mind, this becomes a bigger issue as the quality increases. For all of the "sympathy" that I seemed to receive from the one bartender on this subject, WCL needs to review the plastic cups that they use and the way in which they enforce the policy. If I were any of the breweries with beer on tap at WCL, I would have a serious issue with the way in which my beer is being served. If WCL is as serious about the product that they serve as I think they are, then this is something that must be addressed.

Other than this little issue that I had, we enjoyed a great night of beer and music!

Hey
Scott here from Patrick's Head. Thanks for the "Shout Out". The benefit was a great time and a great cause. Gotta give a lot of credit to Jesse from Point Entertainment for putting the event together in just a few days. Also, Helen Leicht from WXPN - who's radio show was happening simultaniously across the hall - had all the artists appear on-air either before or after their on-stage performance. All-in-all it was a great night. Thanks for mentioning it. Sorry about the plastic cups.