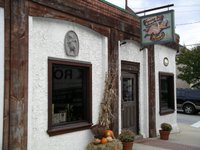 We travel far and wide in search of good beers and bars, but how often do we forget the "old reliables" in our own backyards?! We made our way over to the Flying Pig last night. It's no more than 2 miles from our home and it has one of Chester County's finest selections of both tap and bottled beer. Plus, as an added bonus, it's served in a very down-to-earth environment by friendly people.

It's definitely the kind of place where you can feel comfortable going in a suit after a wedding (we have done) or sweatshirt and jeans (like last night). And, a few nights a week, they feature live and local music. In the front window area are a couple of comfy sofas and chairs. The bar area is not huge with probably around 15 barstools. The remainder of the establishment is filled with tables for dining or drinking. Throughout there are TVs, with some type of sports action, usually local, to watch. To summarize the food selection in one sentence, I'd say that the food menu qualifies as average-to-above-average pub grub.

As for the beers, the rotating bottle and draft selections are posted on chalk boards around the bar, while the usual suspects are listed on a laminated paper menu. Just as a way of giving you an idea of the quality draft beers, I'll list the rotating specials that were on tap last night: Victory Moonglow Weizenbock; Unibroue Trois Pistoles Abbey Dubbel; Smuttynose Pumpkin Ale; Heavyweight Black Ocean Schwarzbier; Leffe Brown Ale; Legacy Euphoria; North Coast Old Rasputin Imperial Stout; and Thirsty Dog Hoppus Maximus Amber Ale. These were in addition to almost 15 other draft beers including (among the better ones): Chimay Cinq Cents; Guinness; Hoegaarden; Sierra Nevada Pale Ale; and Victory Hop Devil. If you're still looking for a beer to suit your fancy, the bottled beers number approximately 50 from which to choose.

Last night, we enjoyed the Heavyweight and North Coast on tap, as well as a 25oz. Chimay Grande Reserve bottle. Also, we bumped into a friend of Patty's and had friendly conversation with a Malvern businessman and the owner of the Flying Pig. I'd say that this is fairly typical of the scene and experience that would normally be had at the Flying Pig.

So, the moral of the story here is...."Don't forget or take for granted your old friends. They still have a lot to offer." On that note, I think I'll make a point of visiting Flanigan's Boathouse in Malvern, Maddie's in Frazer, Appetites on Main, Winner's Circle, and Riverstone Cafe in Exton. While I don't expect any of these to quite measure up to the Flying Pig or the Drafting Room, what the heck? Variety is the spice of life, right.......?

p.s. Don't be frustrated by the lack of parking. If you look around, you'll see that there are street parking spaces as well as public lots to choose from just a stone's throw from the front door. Or, if you're lucky, you may find a spot in the very small lot of 5 spaces behind the bar. Oh, and if you're coming by train, it's an easy walk to the Malvern train station off the R5 SEPTA regional rail line (approx. 50 minutes from center city Philadelphia).

BEWARE! If you get the blonde waitress BEWARE! She is awful. This is the second time I have had her as a waitress. She improperly cleaned the table from a previous costumer, leaving dirty napkins and food on the table. She seemed annoyed when asked about the menu. She also seemed annoyed when asking for another beer. Last time I checked I was in a bar, I’m in there to drink. So naturally I will want another beer. She's a smart A$$. If you don't want to enjoy the great selection of beers offered, or have a good time at The Fly Pig, request her as a waitress.

The Bar Tenders and the brunette waitress are fantastic!!