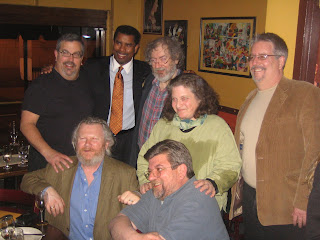 "You are being lied to." That was one of the first things we heard from Garrett Oliver at last night's dinner pairing of Brooklyn Brewery's beers and Adam Glickman's food at Monk's Cafe. How's that? Well, you know the package of bread on the shelf at the grocery store is not really a loaf of bread, right? What is it? Well, you really don't want to know, though Garrett was kind enough to share with us. With these types of comments to kick things off, Garrett set the stage for a night of discussing better beer and better food...working with real ingredients, creating real food and real beer with passion. (He's good at that, isn't he?)

Adding to the buzz of the evening was the presence of Sir Michael Jackson (they may not have bestowed that title upon him yet over on that side of the pond, but I figure it sounds good). Other local beer fans and "celebrities" were in the house to welcome Garrett and the Brooklyn crew.

Now that you know the theme of the night, it's off to the beer and food. Things could not have started off any better than with a glass of the 2005 Brooklyn Saison. As some of you know if you pay me any attention (not sure why you would, though you may just be humoring me), the Saison style is one of my favorites. I believe that it's one the most food pairing-worthy styles out there. Paired with virtually any type of food enhances the flavors of both the food and the beer in ways that must be experienced to be described. This 2005 version was just perfect, so perfect I had another :) In fact, I saved some of this second glass to go with the second course listed below to create an excellent pairing that apparently was never meant to be. 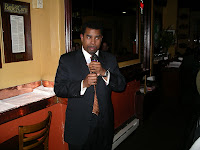 As the "pre-game pleasantries" were quieting down, guests found their tables and George Hummel got things started in typical fashion. The dinner was in full swing with Garrett moderating each course as only he can do. There are hints of MJ-style to his thoughts and observations that he shares with those that will listen. I find Garrett's approach to beer storytelling more engaging than typical tasting notes. Frankly, I don't need to hear someone telling me about how they taste apricots, wheat, citrus, or coffee as much as I really want to hear some of the side stories that complete the beer experience. Taste is such a personal thing that some guiding may be nice, but it's the stories of Garrett travelling the world, tinkering in Brooklyn, and providing insights to the beer and food world that captivates me. What he has done in his career are things that I will likely never experience and helps provide a deeper, richer context in which to enjoy my own beer corner of the universe.

And, for those that won't listen (shame on you!), he is not bashful about making an example of them in front of the entire restaurant...as he did on more than one occasion. Sidebar: seriously folks, are his stories really not that interesting to you that you need to conduct amplified conversations and disrupt the enjoyment of others around you? Eh, I'm probably preaching to the choir here, as I bet those that I speak of most likely are not reading this.

Okay, back down off my soapbox...

The buche sure amused my palate with scrumptious little dollops of smoked salmon mousse in a pastry crust. I wasn't too keen on the pairing with the Cuvee d'Achouffe as I thought the salmon overpowered the beer. But, alone, each was excellent.

The next course presented, in my opinion, the best pairing of the night. You may recall my rave reviews on the newly-released Local 1 from Brooklyn. It's starting to become available in some immediate markets around NYC and beyond, but not yet in the Philly metro area. I've had it two times (now, make that three) and I'm still convinced that this will be in my top 10 beers of 2007. Reading the product notes, it's interesting to see (and hear Garrett describe during the course) how they refuse to be nailed down on a defined style for this beer. Though, many seemed to agree that it's something of a "super saison" or "strong saison" (dare I say imperial saison?....nah, I won't say it). Then, take this smooth, spicy, fruit-full beer and add some simply done rainbow trout and there's a wonderful wonderful [sic] gastronomical pairing. 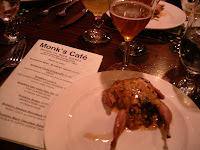 The next two courses included stuffed quail and pork loin with chipotle. Judging from plates around the room, the quail received a tepid response. Though, the pork loin (all 3 pieces of it!) lightly doused with chipotle, was another clear winner especially being paired with the brown ale. Was it the way the pork was done that helped bring out some deeper elements of the brown ale? I don't know, but I was picking up enticingly burnt, roasted, even slightly smoked flavors in this solid brown ale. This combination worked very well.

The next course of duck and Weissbock was also quite good. How tender was the duck? I can't begin to describe, but this was also nicely done (getting tired of hearing this yet?). Though, I was struck by how the weissbock did not remind me of my last two run-ins with it. Even though Garrett admitted that they felt it came up shorter on the smokiness scale than they expected, I seemed to recall hints of it previously that I did not notice during this dinner. Perhaps the chipotle smoke overpowered it? In any case, still a very good pairing. 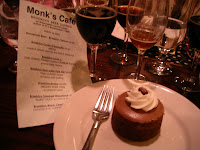 And, would a Monk's dinner be complete without a grand finale of oohs and aahs surrounding the dessert course? There have been many before, but how can this one possibly compare, even by just simply reading the description? The Black Chocolate Stout from Brooklyn paired with a Chocolate Coffee Cheesecake....you've got to be kidding me. Truly, it stands alone in a class of its own. I had my eye on this course from the second we sat down, and I sure was not disappointed. The deep, rich, and bitter flavors of the stout against the, uh, rich and bitter flavors of the cheesecake had us all polishing off this course in record time! 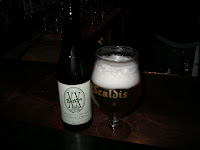 With the late start and the drawn-out good times of the evening, there was no way we were catching the 10:15 train. So, I settled in with a De Ranke XX Bitter from Wevelgem, Belgium. I needed to try one and once again, not disappointed! A perfect "nightcap" as we hung around for another 45 minutes chatting with whomever was left after the dinner and took the opportunity for some additional group pictures.

The last chapter to this long evening story included a train ride home with the esteemed, respected, and almost venerable Mr. Curtin. We're anxious to hear Jack describe his version of the story... (though, some aren't so anxious!)

Until next time....New Belgium, I believe that is....considered yourself warned :)

Wow, Garrett needs to come do a Beer Dinner in Pittsburgh.

What a great writeup. I know, I know I'll get my version of the story posted soon.

I think Jack forgot about us and our little bet ;-)