Getting Started in Homebrewing - Choosing the First Recipe 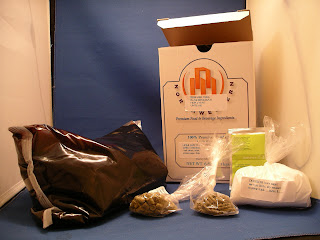 It's been a while since I last visited my maiden homebrewing project here. My next steps I said would be to decide on a recipe and a process. In other words, would I go for the extract or the all-grain approach to brewing right out of the gate? Then, which recipe would I choose as my first?

The first decision was the more difficult one and one that I still wrestle with. I chose to start with extract brewing just to get started and as a way of cutting my brewing teeth. Not that it's all that big of a deal, because to move to all-grain after a few batches will simply require additional equipment and more time.

The reason I say that I wrestled with the decision is that, in the kitchen, I'm the kind of person who wants to take as few shortcuts as possible. I like making food from the most raw ingredients possible. If a meal takes several hours, even prepping the day before, to make then that is fine with me. To include some homegrown ingredients is even better. So, it might make sense that I would enjoy crushing and mashing my own grains (okay, okay not really my own grains...I'll leave the growing of the grains up to someone else).

So, I've chosen to begin my brewing journey with the extract process. Next is to determine my first beer style. While it sure is tempting to go after something like a Belgian Strong, English Pale, or American IPA, I chose the Nut Brown Ale recipe for two reasons. First, it's one of the advertised prepackaged kits at Home Sweet Homebrew. So much for not taking shortcuts, eh?! Second, one of my friend Mark's good ol' standby recipes that he has down to perfection is the nut brown recipe. While he said this was an all-grain recipe that he crafted himself, I still thought I should give this tried and true style a shot.

I'm anxious to get brewing, so for less than $100 I bought the start-up equipment and the ingredients that I need for extract brewing. Next posting, I'll discuss more about the equipment that I purchased.

I assume that's the extract in the brown bag on the left. For your next brew, I suggest trying a partial-grain batch. At the Keystone Homebrew shop they have similar kits as shown, and instead of using all liquid extract, they supply some liquid and some grain. I've been using their kits for years now and I really like them. I'm not interested yet in moving up to a full-grain batch, and I'm not sure about the flavor of using an all-extract recipe.