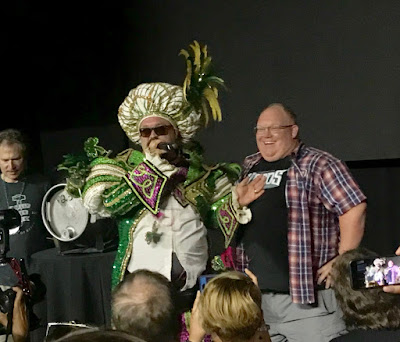 The first three days of Philly Beer Week 2019 are in the rear view mirror. I concur with the feedback I heard from many on both sides of the tasting tables that the 2300 Arena as a venue worked well for Opening Tap, utilizing both indoor and outdoor (under I-95) space to facilitate the flow between tasting tables and other amenities like axe throwing, photo booth, food, and live music. Other than not being easily accessed by public transportation, save for a couple bus routes that could get you in the vicinity, the feedback was positive.

Here's a gallery of pix that I collected along the way.

According to the official events calendar on the PBW website, there are 259 events remaining in the next 7 days. I took some time to de-dupe and remove recurring events, we're a bit closer to 200. Here are a few highlights that jump out to me and where you may see me partaking.

Mon. June 3
~ I'm not doing anything official today, but let's say for argument sake I was, I might have brunch with 3 Floyds at Jose Pistola's, then quaff some quality beverages with The Beer Lass at City Tap House, help Matt Satten and Varga raise some charitable funds for the Chemowarrior cause, see who brews the best homebrew at Jose Pistola's, and then maybe drive out of the city by way of Hop Angel for some German beers from the source and German-style beers from Sly Fox. Instead, unless I take a wrong turn and wind up in Philly tonight, it's on to Tuesday planning.

Tue. June 4
~ Not sure I can handle the crowd expected at Monk's for the Maine event. I'll check it out, but be ready to move on because there'll be oysters at Johnny Brenda's, oysters and clams at Bru, hungry hippos at Memphis Taproom, and chocolate at Iron Hill. Blume is hosting Burley Oak, Capone's has Hidden River, Jose Pistola's is featuring The Rare Barrel, The Belgian Cafe brings the brewery formerly known as Draai Laag, and The P.O.P.E. is pairing The Futurist and 2SP. The Grey Lodge is hosting a pretty clever sounding Jersey event and the feature spotlight event of the night discusses the intersection of package art and beer.

Wed. June 5
~ Now things get really interesting. Crossing the midway point puts on a solid showing of events on days 6 and 7. In the suburbs, Capone's is doing double duty bringing in a local (Imprint) and an out-of-towner (Zero Gravity) to feature on Wednesday. Back downtown, Second District Brewing is hosting a CBD beer dinner which sounds mighty enticing, not to mention relaxing. Goats are not on the menu but will be making an appearance at Bar. The goats of Sly Fox's Goat Races, that is. King Pin is another annual ritual not to be missed. It happens quickly at Standard Tap, so be sure not to miss it. Up the road a bit at Memphis Taproom are three heavy hitters - Lawson's, Industrial Arts, and LIC Beer Project. Finally, there's a dose of beer and religion at Fergie's. But the devil is not be outdone where, over at The Belgian Cafe, we can close out the night with "Late Night with the Devil" that brings together Duvel and La Cabra. Hey, that's another goat reference!

Thu. June 6
~ Food events are catching my eye on Thursday's slot in the calendar. Pierogies at Grey Lodge. Pork at Royal Boucherie. Ice Cream at Iron Hill. As for beer features, we'll find Jersey-based breweries at Brickwall, Pizza Boy at Bottle Bar East. And, 3 Floyds at both Barcade and Tria Taproom. If you want some smarts with your beer, check out the Jeopardy fun at Evil Genius.

Fri. June 7
~ Despite the best intentions, I've still never made it to the annual event at Good Dog featuring Sly Fox and pinewood (sorry, canwood!) derby car racing. I even have two from when I was a Cub/Boy Scout as a yute. Maybe I can modify them and bring them along. Otherwise, a bunch of featured breweries sound interesting to check out including 2SP and a barrel full of collaborations (Varga), Tired Hands and Equilibrium (the P.O.P.E.), Lawson's (Jose Pistola's), and The Alchemist (Teresa's Next Door). TND, that is, if I missed The Alchemist earlier in the week at Monk's.

Sat. June 8
~ One of the few events with perfect attendance since 2008 - Ladies Beer Tea - is happening again at The Belgian Cafe. I'll leave that one to the ladies; it's almost always a sellout and I expect it will again this year. I, instead, will look for my liquid refreshment and frivolity at some combination of Tria Taproom (for an Almanac-themed event), the P.O.P.E. (Rar Brewing and friends), City Tap House-Univ. City (Grateful Dead themed fest), and a brunch at Blume that could start the whole day. They're featuring "blenderies" (did I just make that up? nope. just googled it.) including The Rare Barrel, Referend, and Form. Blume is the rebranded Cinder. There's also a Dunk A Trump event at El Camino Real and, let's just say, I did very well at that challenge (for ALCU charity of course!) and may feel even more motivated this time around. Then, also, back in the 'burbs near home is where Teresa's Next Door and Troegs will play host to their annual beer garden during the Wayne Music Festival.

Sun. June 9
~ For the last day of beer week, the past has typically presented Russian River at Local 44, Music Fest at Dock Street, or running events that I coordinated. Sometimes the TUD at Fergie's if staying out that late made sense. Now, a new standard seems to have emerged and it's just a few miles from home for me. La Cabra (winner of this year's PBW collaboration brew with Duvel) is again hosting the Suburban Love festival, complete with 10 other suburban breweries. Last year was excellent and I expect no different this year. If I do make it into the city, Sour Sunday at Devil's Den with Free Will is carving out its own place on the annual PBW events calendar.