Rest up tonight Hammer of Glory, your big day is tomorrow 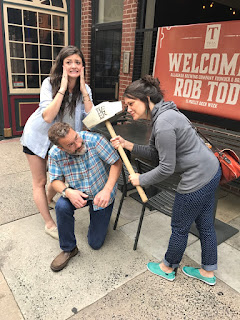 Remember that detailed itinerary for the Hammer of Glory I referred to the other day? Found it. Thanks to Mr. Scoats and Ms. Dowd for forwarding along to me.

25 stops in 9 hours. Looks like we'll finally get a break in monsoon season and a great weather day to kick off PBW 2019. Can you keep up?

Time to get back on the Philly Beer Week wagon 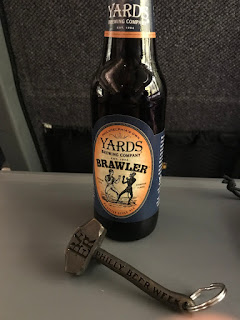 I could not have been more proud of the work I did during Flagship February. So much so that I left it up here for the last three months while I collected myself and tried to determine where to go next. Well, I drank some good beers here, there, and everywhere. Did my social media bit and wrote some for Ale Street News.

Now it's time to move on to Philly Beer Week, the 12th edition. (The official website says 11th, but who's counting?! All those beers apparently make it difficult to keep track.) It kicks off this coming Friday, May 31. And while I don't believe for a second that there will be "nearly" 200 establishments putting on 2,000+ events during the 10-day stretch (quoted from the press release), what I do believe is that there will be plenty of opportunities to drink newly released beers, OG beers, regular beers, weird beer, go to some familiar joints and some new spots, meet some fun people, and have some memorable times while doing it. As of this evening, there are 303 events (up from 210 on May 22 and 258 two days ago) listed on the official calendar, though that number does include some duplicates, a bunch of recurring daily events, and even some without an establishment listed.

I have yet to determine just how much PBW 2019 my personal and professional lives can handle, but it will be able to handle, at least, the first three days. In my honest and humble estimation, no one other independent beer writer has covered each of the 11 previous years of PBW. Content from some of the early years contain still some of my most trafficked content. In that spirit, I continue again this year. Here's what I have on my mind and where you and I might cross paths if you choose to do the same.

(the Hammer of Glory will, once again, be making it's trek around the city on the way to Opening Tap. once I track down a detailed itinerary I'll be able to determine if/where I'll cross paths with it.)

Beer Week Begins with Burley Oak - 4 p.m. - Interstate Draft House
~ I typically only see Burley Oak when passing through on the way to/from OBX. And I really like Interstate as a neighborhood hang.

Ommegang Kickoff Happy Hour - 4 p.m. - BRÜ Craft & Wurst
~ I've done this "kickoff" event for a beer or two from Ommegang and that usually goes quite well, so I'll do it again. Plus, they're scheduled to be pouring the Duvel/La Cabra collaboration, so that could turn out to be my first taste of it.

Fonta Flora Debuts in PA - 4 p.m. - Monk’s Cafe
~ a spectacular brewery that I've had the pleasure of only from a distance and when traveling in NC. This could be way too crowded for a quick stop, but I'll give it the ol' college try.

Yards Brewing “The Chinook Of Mormon” - 5 p.m. Good Dog Bar
~ Brotherly Suds is back and seems like a nice quick stop on the way from Monk's

Toppling Goliath Launch - 6 p.m. - BRÜ Craft & Wurst
~ just had a few King Sue's when up in NYC last week. Renewed my interest in this event. Maybe some will be on tap while I'm there for Ommegang earlier in the day and can double-dip? Something has to drop from this overly ambitious afternoon list; hope it's not this.

Post Opening Tap Party with Pat Finnerty's Live Band Karaoke - 10 p.m. - Fergie’s Pub
~ because Fergie's. because upstairs. because the party ain't over until you get to Fergie's.

Hair of the Dogfish Head Brunch - 11 a.m. - Fergie’s Pub
~ if I don't make it to Fergie's the night before, brunch on Saturday with DFH would be a great way to begin.

It's A Firkin Riot! - 11 a.m. - Johnny Brenda’s
~ can't say I've ever missed this fine event in past years so I don't think I'll pick this year to break the pattern

The Referend Comes To Interstate - 11 a.m. - Interstate Draft House
~ I could see the Burley Oak on Friday falling victim to logistical issues in my travels around the city. But, I've heard a lot of good stuff about Referend in NJ, so I'll try not to miss this one.

Urban Village's Birthday Party - 11 a.m. - Urban Village Brewing Co
~ I did this last year to kickoff of the first Saturday and that went quite well, so I have it at the top of my list again this year.

Heavy Medals - 2 p.m. Iron Hill - Center City
~ the new IH location is central to so much, including the trains, so this event seems like the right time to pass through here.

Dog Day Afternoon - 1 p.m. - Pub on Passyunk East (P.O.P.E.)
~ Fat Head's has a track record of dog-related events and bringing in KOP's Workhorse brewery and Lord Hobo too to make it even more of an event with Morris Animal Refuge, one of the city's finest.

Roy-Pitz Sour Sunday & Barrel House 2nd Anniversary Party - 12 p.m. - Roy-Pitz Barrel House
~ these guys are part of a growing beer destination neighborhood and this kind of event is a good time to check them out.

Yards Dunk The Brewer - 3 p.m. - Garage – Passyunk
~ fundraiser for PAWS and dunk tanks. hard to say no to that.

Brunch Bingo with Firestone Walker - 12 p.m. - Brickwall Tavern
~ don't even need to hear what FW beers are being poured. count me in. the bingo is almost secondary.

Cider Sunday - Meet The Owners & $5 Drafts - 2 p.m. - Blume
~ do I dare make room in PBW for a cider event? I know, it doesn't make sense, being beer week, but I'll roll with it. I like the ones that are being poured.

Allagafternoon - 4 p.m. BRÜ Craft & Wurst
~ because you can never have enough Allagash.

2SP Brewing Presents Industrial Arts Brewing Co. - 5 p.m. - Good Dog Bar
~ haven't had a run-in with IA and Chief in much too long, so Good Dog seems like a good place to rectify that

A Late Night In Brussels Part Duex - 10 p.m. - Jose Pistola's
~ if Monk's didn't do me in, Pistola's most certainly will.