Must be hitting some sort of record beer event slump here in the Philly area. Don't believe I've ever started a month with a calendar that is this small. Course, we've been spoiled around these parts for quite a while. Plus, I'm sure that as the month progresses, more will become known to me.

In the meantime, my new book Beer Lover's Mid-Atlantic is hitting its stride quite nicely. My own events calendar around this will be ramping up again here in July and August and farther abroad in August, September, and October. Not long after that, I'll be reminding you that it would make a swell Christmas and Hanukkah gift!

Let's finish off June with a healthy dose of interesting-looking beer events. There are festivals in the streets, on a ship, and even in the buff. Check 'em out and stay cool.

Also, please keep my book events in mind where I'm talking beer, selling/signing books, and in some cases tasting beer with anyone who shows up. The events thus far have been successful and I'm looking forward to keeping it going.

Here's a link to the full list of future and past events where you can catch me selling Beer Lover's Mid-Atlantic.

Bethlehem, Pa.
Sat. 6/27; 12 p.m.-4 p.m. - Lehigh Valley Hopsfest at Main & Lehigh Streets ($10-$65 for a fundraiser featuring 67+ breweries that has been created to help us grow our mission of promoting and preserving the Celtic culture.)

Lancaster, Pa.
Sat. 6/27; 3 p.m.-7 p.m. - Pints For Pups at Buchanan Park ($20-$75 as all proceeds from the event will go directly to veterinary and pet care programs for people and animals in some of our most under-served and impoverished areas.)

Written by Bryan Kolesar at Thursday, June 25, 2015 No comments:

Ten years of serving at The Brew Lounge, Part 4 - Let's Make a Date of it 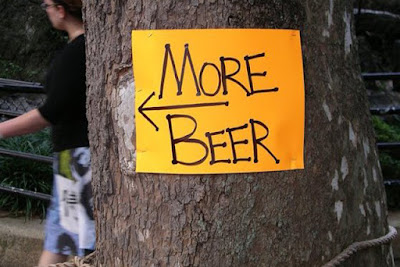 After much too time between installments here, I've returned with another in the series that looks back on the ten years of my writing here at The Brew Lounge. So far I've taken a look at my early days and the importance of place in parts 1 through 3. Check 'em out using the little navigation front and back links I put up top and at the bottom here. I've got another 9 scheduled so let's see how that goes! For now....

What's more important in the beer industry than events? Of course I realize that it's not that simple and that events are merely an important part of the equation to winning the game. But, without events, the ability to reach consumers drops in the ever-competitive landscape of beer marketing.

Consumers really are the end game, that probably goes without saying. With consumption typically meant as a fun and social endeavor, it stands to reason that establishments that put their best foot forward with beer events will prosper more than those that do not.

Of course, it's not a golden rule. But it certainly explains the overwhelming popularity of weekly and monthly beer events that I have listed here at The Brew Lounge since late in 2005.

Here's a link to the master view since "the beginning of time".

Once I saw the intense interest from beer lovers wanting to know where to find their favorite beverage, I ramped up my efforts for what resulted in the most comprehensive beer events calendar in the region. So much so that Mid-Atlantic Brewing News took notice and asked me to assist with their Hop Tips, a bi-monthly beer events calendar for PA, NJ, DE, MD, WV, VA, and DC blasted out via e-mail. They, too, were a big hit when I was writing in the Communities section of the Washington Times. Even Philly Beer Week, this year, asked me to lend a hand with the events calendar.

As my "traditional" writing here in the pages of The Brew Lounge as slumped in the last couple of years, I've vowed to always keep the beer event listings going. The stats show that it's been worth my while. As do the occasional beers and shout-outs that I get along the way at bars and festivals. From my perspective, it's crucial to the industry for both consumers as well as producers and proprietors. It really is the key to the world of beer from a consumer's point-of-view.

As a final note, if it wasn't abundantly clear, I don't quibble about what is or what is not an event. And there is no price for listing. If an establishment makes the effort to create a named event - anything from a free sampling to a full-blown festival or dinner - it gets listed. I never hit 100% of all events conducted in the region - that would be nothing but impossible - but plenty of folks help out by sending notes, texts, etc. in order to keep me in the loop.

In turn, I keep you in the loop.

Big beer wheels keep on turnin'. Can't say there's not a little of everything scattered everywhere on this week's calendar of events. Festivals, dinners, tastings, and book signings from the PA state capital to Philly and back again.

Also, please keep my book events in mind where I'll be talking beer, selling/signing books, and in some cases tasting beer with anyone who shows up. These events during Philly Beer Week (and Frederick Beer Week) were successful and I'm looking forward to keeping it going.

Here's a link to the full list of future and past events where you can catch me selling Beer Lover's Mid-Atlantic.

Lafayette Hill, Pa.
Thu. 6/18; 5 p.m.-8 p.m. - Book Signing with Bryan Kolesar at Barren Hill Tavern & Brewery ($PAYG as beers featured in the book are put on special as the author makes an appearance to talk beer and sign/sell books.)

Perkasie, Pa.
Fri. 6/19; 6 p.m.-9 p.m. - Book Signing with the One and Only Bryan Kolesar at Free Will Brewing Company ($PAYG for an event that they named, not me. But, I'm honored no matter what they call it. We'll talk beer, drink beer, and hopefully some of you will go home with a shiny new book.)

Written by Bryan Kolesar at Thursday, June 18, 2015 No comments:

As you get your post-Philly Beer Week legs under you, here are some suggested approaches. Also, please keep my book events in mind where I'll be talking beer, selling/signing books, and in some cases tasting beer with anyone who shows up. These events during Philly Beer Week (and Frederick Beer Week) were successful and I'm looking forward to keeping it going.

Here's a link to the full list of future and past events where you can catch me selling my just-released Beer Lover's Mid-Atlantic.

Philadelphia, Pa.
through Sat. 6/27 (weekly on Saturdays); 11 a.m.-1 p.m. - Brewing Program at Philly Beer School ($549.99)
Thu. 6/11; 7 p.m.-9 p.m. - Abita's Jaime Jurado — "Our Next Big Challenge in Craft Brewing: Environmental Sustainability" at Hop Angel Brauhaus ($PAYG for Jaime's presentation. He will also be around to talk (and drink) beer. We will have a bunch of Abita's German style beers on tap including Amber, Golden, and Seersucker Summer Pils.)
Fri. 6/12; 6 p.m.-8 p.m. - Dark Horse Brewing Tasting at Bottle Bar East ($Free tasting samples of beers from Dark Horse.)
Fri. 6/12; 6 p.m.-9 p.m. - Abita Louisiana Crawfish Boil at Grey Lodge Pub ($PAYG as Abita's Jaime Jurado will be in town and we'll be having a Louisiana Crawfish Boil to welcome him back to PA.)
Wed. 6/17; 4 p.m. - High Gravity at The Sidecar Bar & Grille ($PAYG for a killer lineup of high gravity beers from around the world.)

Written by Bryan Kolesar at Thursday, June 11, 2015 No comments:

Philly Beer Week holds court here in the first week of June. Head over to their website for a full list of events.

In the meantime, my book Beer Lover's Mid-Atlantic has finally taken flight after more than a year in waiting. There'll be events and lots of me trumpeting its arrival. Check out the Facebook events page for the book to see where I've already been and where I'll be in coming days, weeks, and months. For now, head on over to the publisher's website where you can find a series of links to online sites, such as Amazon, where you can find the book for sale. Brick-and-mortar stores, too, will be carrying the book.

Apologies for the lateness of this calendar posting. Between book release and Philly Beer Week - and, oh yeah, life in general - it's been just a touch chaotic. Did my best to pull together what I could here. Probably a bit light, especially as establishments are particularly concerned with Philly Beer Week. Check back here in the next week or two for what will sure to be a changing June calendar.