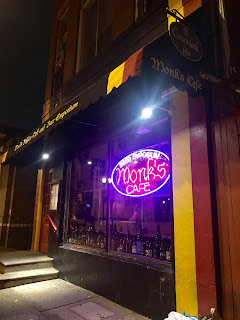 I've been at this thing for almost 14 years now, officially on the record, that is, with The Brew Lounge, etc. These Monk's dinners which were once a standard, reliable nearly on a monthly basis for a while, are much more infrequently spaced out during the year. But, the excellence remains.

So while Monk's has maintained its standing in the city's (and country's) beer scene, there's just one thing I can boast as having improved on my end - the pictures. Well, actually, I suppose I have nearly nothing to do with it. It's all in the technology. Think about the St. Feuillien dinner that I referenced the other day that dated back to my first piece here in September 2005. No smart phones. And digital cameras were just growing up.

The pictures never did neither the food nor the beer any respect. I think this batch here from Tuesday night earlier this week at Monk's shows just how far we've come in this area. But, I digress...as is my tendency. Tom Peters kicked off the dinner in everyone's favorite back room at Monk's by thanking all who came and the local food and beer providers behind the dinner's all-local theme.

In the past, the local beers to select from were much less in number and, well, some in quality. That number, as we all know, as skyrocketed and the choices are limitless, except for some still with quality issues which can be discussed elsewhere.

I've gone on for paragraphs in the past carefully detailing each course and yada, yada, yada. But, since I've lost any rhythm that I used to have here with regular postings, I'm just gonna get these pictures out to you of each course and pick a winner. Not one pairing disappointed, not even in the least. But when forced to pick my favorite of the evening, it had to be the sweet and savory Bone Marrow Bread Pudding (with apricot and pluots) served along with Brewery Techne's Haiku, which had been kettle soured with Montmorency Cherries. Think about that for a second and then go to your kitchen and see what you can round up for dinner tonight. Cheers! 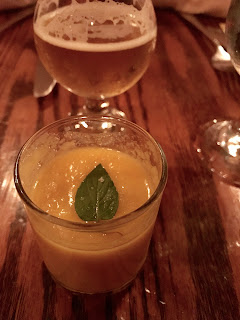 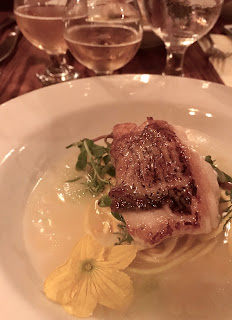 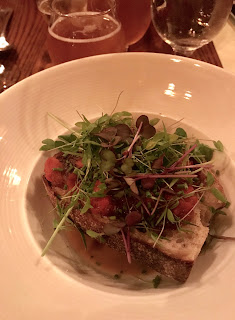 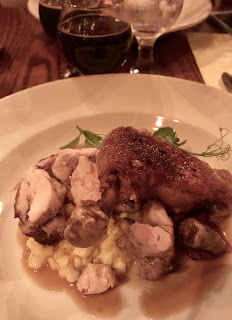 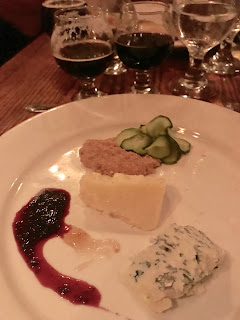 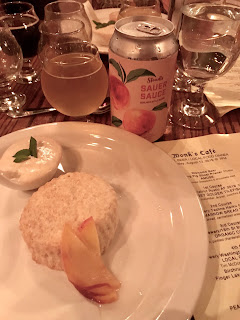 Written by Bryan Kolesar at Friday, August 16, 2019 No comments:

Back to Monk's Cafe for dinner 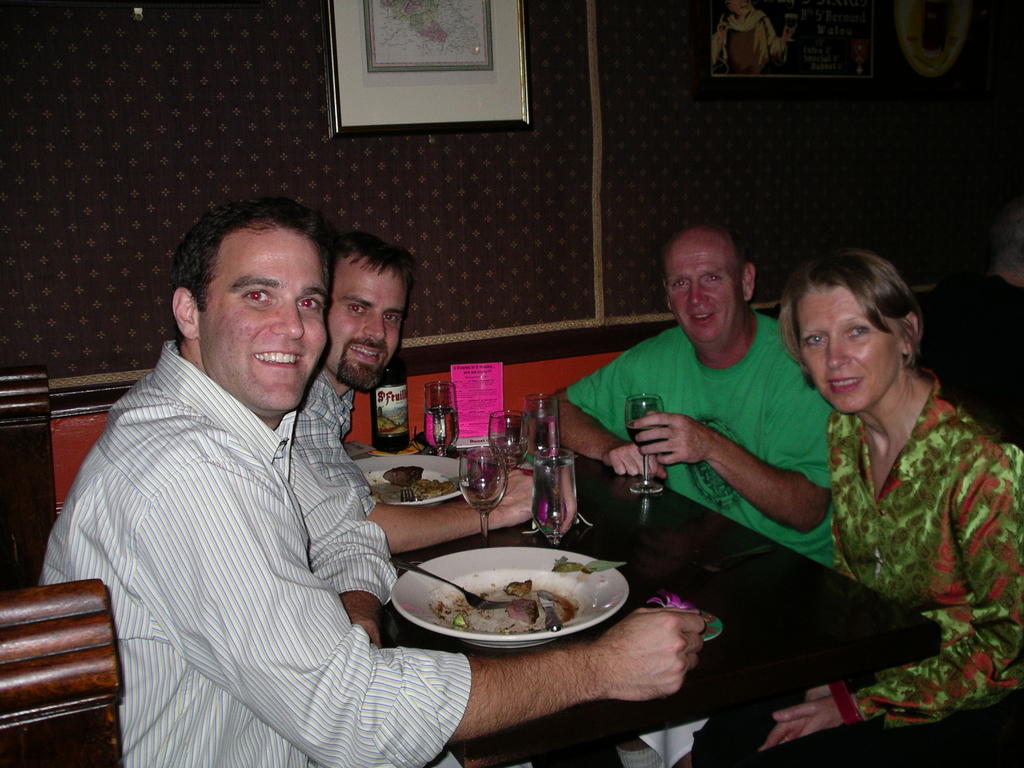 Let's see if this thing still works. In all probability, I put too much "material" on social media that could instead make for better-reading blog posts here. But I'm beyond apologies; it's the way these days, it seems.

Enough hand-wringing. Let's talk about Monk's Cafe. Let's talk about how tomorrow, Tues. 8/13, will not only be the day that would mark my father's 96th birthday (!), it will also mark exactly 13 years and 11 months since I got things going with my first post here on The Brew Lounge.

It happened to be an epic beer dinner at Monk's with Dominque Friart and her St. Feuillen brewery in Belgium. By all accounts, it was the typically excellent beer dinner that Monk's had been and is known for in pairing foods and beers. My writing, on the other hand, was a bit raw now in hindsight. But it led to better writing, networking, embedding myself in the industry, writing for numerous print and online outlets, including my Beer Lover's Mid-Atlantic 416-page book covering the best of the region.

I bring this up because tomorrow night sees Monk's putting on another display of carefully considered beer and food pairings -- this one, featuring all things local on the plate and in the glass. Beers to be featured will come from Brewery Techne, Second District, Sterling Pig, Stoudts, Tired Hands, and Yards.

Beer dinners had reached, oh five or so years ago, the point of being a dime a dozen. Everyone wanted a piece of the action, though the best stood out head and shoulders above the rest. Some of the most usual suspects doing it well, like Monk's and all Iron Hill locations, have let these special, fixed price dinners mostly fade from the event calendar. At least, let's say, they're no longer held on a regular basis. Suppose it's just a sign of today's consumer preferences, but I'll still miss them and helps me look even more forward to what awaits at 7 p.m. tomorrow night.

I was in the back room at Monk's this past Saturday late night for the dessert course of a progressive dinner around the city. The pecan pie and Firestone Walker Parabola had me instantly anxious to return in three nights. If I do things right, you'll be able to check back later with my breakdown of Tuesday evening's tastes, sights, and sounds. 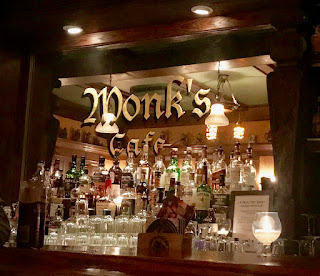 Written by Bryan Kolesar at Monday, August 12, 2019 No comments: