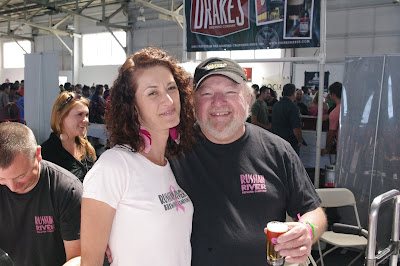 For a full gallery of pictures, please link here over to Facebook. And, while you're there, here's a shameless plug for you to hit "Like" if you've not already done so. Thanks as always for your support.


The 2013 Breastfest may now be three weeks in our rear view mirrors, but when we are talking about a well-executed beer festival — one of the best regional showcases of beer on the West Coast, and a charitable fundraiser to boot — it's easy (and deserved) to share with you still today.

The annual Breastfest beer festival serves as a fundraiser for the Charlotte Maxwell Complementary Clinic, which assists low-income women with cancer. This year, the host brewery and organizer, Marin Brewing Company, happily announced that they made a $40,000 donation to the Clinic due to the success of the festival that saw roughly 2,000 pass through the gates.

The festival returned to the Festival Pavilion at Fort Mason Center, perfectly situated at one of the northernmost points in the visually-stunning City By The Bay. Over seventy breweries were in attendance along with four wineries and three cider companies and complimented by plenty of food and non-alcoholic beverage options as well.

Beer festivals are as popular as ever with the constantly widening base of the craft beer pyramid. While I and others like me that have been around "the scene" for quite some time may have long ago tired of the mostly typical beer festival format, Breastfest has found ways in which to make it enjoyable both for newbies and veterans alike.

Attractive venue: This is the fourth year that the Festival Pavilion has hosted Breastfest after having moved from Marin Brewing Company in Larkspur in favor of a larger venue. Not only is the location much larger (much!), instead of a suburban parking lot as a backdrop, attendees have the pleasure of looking out over San Francisco Bay, Coit Tower, Alcatraz, and the Golden Gate Bridge. In addition to these permanent fixtures, this year's festival-goers had the unique opportunity to witness preliminary stage racing in the America's Cup/Louis Vuitton Cup yacht racing event which is ongoing into September. After the festival, folks could make the short walk to the America's Cup Village, Crissy Field, Ghirardelli Square, Fisherman's Wharf, or the Embarcadero. No doubt that Breastfest definitely has the attractive venue checked off the list.

Volunteers: For any event of significant undertaking, the value that volunteers add to the successful execution of the event can never be emphasized nearly enough. Breastfest has volunteers successfully pulling off their duties beginning with the quick and efficient entry to the festival all the way through to serving and constant venue cleanup.

Attending brewers: This is a big one for me. Obviously, with craft breweries (and their supporting staffs) more in demand than ever, it's impossible for key brewery personnel to be at all events, particularly concurrent ones. So when you see a majority of brewery tables at a festival with owners and/or brewers and/or other key sales or other brewery personnel milling around, chatting, or serving, you must know that the event draws a deserving respect that adds to the overall quality and karma of the event. You can see from the pictures I've included here that the Breastfest certainly does get the love and respect from Bay Area brewers.

Available food: You know how too many beer festivals put out a lame attempt at satisfying some perceived level of responsibility for providing food to paying/drinking attendees? And how that food typically falls woefully short in both quality and quantity? How the supplies run short barely half way through the event? Or how at many events, food is available at an extra charge? At Breastfest, there are no such worries. Marin Brewing Company, Moylan's Brewery and Restaurant, Ross Valley Kitchen, Kama Food Lab, and Three Twins Ice Cream took care of the pasta salad, Caesar salad, nacho chips, sandwiches, and ice cream that were available in plentiful supply and right up until the closing bell. The ice cream had a beer tie-in as one was made with Marin's Abbey Special and one was called Black and Blue made with San Quentin's Breakout Stout and Bluebeery Ale.

Non-alcoholic beverages: If I might (and it's a very soft 'might') give an event a break for dropping the ball on making decent food, and enough of it, available throughout the festival, I will not (emphasize, will never) tap dance around how irresponsible festival organizers are for not supplying non-alcoholic beverages. Plenty of it. And, here's the big one, Included In The Admission Price. I don't care if it's donated or if the organizers pay for it. Charging an extra buck or two for each bottle of water is greedy and irresponsible. If I used profanity here at The Brew Lounge, this diatribe would get even nastier. Oh, but wait. This piece is about Breastfest. At this year's installment of Breastfest, waters, teas, seltzers, energy drinks, and vitamin-fortified beverages were all available. Not on a small table in a corner served up in small cups by volunteers. On large, main center tables as well as scattered throughout at occasional brewery tables. In plentiful supply until attendees were walking out the door at the closing of the event. Well done, Breastfest, well done indeed.

Music and Miscellaneous: While music may not be the most critical component in a well-run beer festival, when it's a cover band that provides a ton of fun singalong party songs for people to swing and sway (there was some jumping and jiving as well), it can take on a life of its own and add a really fun element to the event. This year, it was Wonder Bread 5 replete in their outrageously colorful outfits covering party hits from the 80s through the 00s. In addition to the live music, raffles, skee ball, photo booths, and probably other miscellaneous fun 'n' games were available to keep the crowd happy and energetic.

Event duration: Four hours to take in everything I've shared with you here. That's enough time to take in the scenery, socialize with friends, learn a bit from brewers, eat, rock out to live music, and drink great beers. Five hours is plenty of time to get your buzz on, but it's also the right amount of time to take your time in doing so. The first hour or two builds slowly and a bit quietly to a crescendo that occurs somewhere in the second half when the fun cover party band takes it home in the last couple hours. But, for as much fun as most are appearing to have, seeing people falling over drunk or embarrassing themselves in other ways is just something I have not seen. I must believe that it's due, in part, to the five hour duration and contributed to by the ample food and non-alcoholic beverage supply.

p.s. and The Beers: I should probably not leave this piece unfinished without a few shout-outs to some of the best-slash-most-interesting beers that I encountered during Breastfest 2013. Everyone always seems to want to ask my opinion, so without going into a ton of detail, the following deserve to be heard from - and tasted - based upon my impressions at Breastfest 2013:

Moonlight Reality Czeck Pils (and really most anything else this northern California gem/staple is pouring);

Ale Industries Uncle Jesse (because Session IPAs usually work for me and this one, at a few ticks over 5%, did not disappoint);

Sonoma Springs Slownoma Saison (quite possibly one of my best-in-shows from the fest);

Iron Spring Kent Lake Kölsch (one of these excellent bottles made its way back east with me, that's how very good this is);

Bear Republic Café Racer 15 (perhaps this is a different approach than the aforementioned Hop Candi, but oh my juicy, Citra, hophead friends, this is a big tasty treat);

and Russian River Brewing Company (do I have to say their name? well, of course I do, when they are consistently one of the best).

After having attended for the second consecutive year, you can probably read me correctly if you hear me saying that Breastfest is a beer festival model. How they continue to keep the festival affordable (by today's rapidly escalating admission price standards) at $50-$60 is an accomplishment as well. If there is behind-the-scenes scuttlebutt that I'm not privy to, that may be possible. But, from this side of the table, I hope to return again in the future to taste some of the best from northern California and support a great cause and encourage you to do so as well.