Ten years of serving at The Brew Lounge, Part 6 - The People 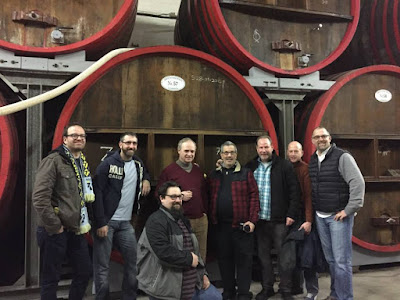 It always tweaks me just a bit the wrong way when I hear, "it's just beer". Fine, making beer is not curing cancer. However, to dismiss any argument away with the scapegoat of "it's just beer" is to minimize the impact - the much growing impact - that the beer world is having on individual lives through the jobs it creates. Let's not get bogged down in the flat-line-ish trend of overall beer sales; we all know that we're talking about the non-macro side of the fence here. The non-macro segment continues to grow like gangbusters, creating jobs both direct and indirect along the way. Jobs that provide income to those involved.

So with that, along with the topic of "place" that I last discussed in this ten-year-retrospective, I find the topic of "people" to be of equal importance when discussing the wide world of great beer. Whenever possible, I've focused on the people and the places that are central to the brewing establishments cranking out the great beer and the beer bars and restaurants that serve it well.

The examples are way too numerous to list out here. However, I might point you to some memorable projects that made their way out in various bits and bytes throughout the years.

Perhaps oddly enough, the year-end obituaries that I post are some of the best examples I can think of. At each year-end, I like to bring attention to those in the industry that passed away during the past year after leaving a long-lasting mark on the industry. It's something that I've rarely seen done in other beer forums and find that it's my small way of bringing some lasting attention to the good work that individuals have contributed to the betterment of the beer world. Check out the yearly wrap-ups that I'm referring to.

While I haven't dipped into full-blown brewer and brewery profiles in quite some time, that may change soon. Though you could argue my just-released book was exactly that. Check out one of the profiles I assembled in advance of Philly Beer Week 2008 to help bring awareness of those brewing establishment participants. I did one for each local brewery and I guess, yes, could have been seen as a precursor of the book to come 7 years later.

There've been other profile, interviews, etc. through the years. I seem to reminisce back to a couple a bit more than others. One was with Ric Hoffman of Stewart's in Delaware (timely with their 20th anniversary party this coming weekend.) And another was with Sean McGettigan during his anniversary of opening Station Taproom in Downingtown, Pa. Plus, it's video and how exciting is that?!

There have also been interesting interviews (if I do say so myself) of folks like an epic one put together with both Jose Garces and Garrett Oliver on the eve of their beer dinner at Chifa.

Got to be a people person in this business. Beer and people keep this might engine humming and I've been honored to meet some fine conductors along the way.