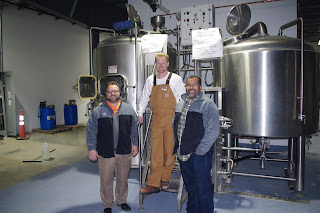 I'll keep this short and allow the updated pictures that I took this week during a quick visit to speak for themselves. These guys are just about as close to schedule as they could have hoped to be and now that the brewery is up, running, and filling kegs (with special consultation from, you guessed it, Scott "The Dude" Morrison), April 1 is the date set for grand opening to the public. Regular hours in the initial weeks and months will be on Thursday through Sunday.

My hopes were high for these guys once I learned of their motto "simply crafted". Lost in the craze of the last five to ten years (or more, who's counting?!) are exactly some of the things they point to when they claim to be bringing "fresh, simple, and classic beer options to the craft brew community." No punny names, just clear style descriptions. No salacious advertising or bombastic marketing, just continuous social media updates and practicing transparency on the website (though, the grand opening is still listed as 3/24). No "imperial" this, "wild" that, etc., just an attention to classic styles (so far).

I say this without having yet tasted a drop of their liquid, so my hopes still remain high. Out in the wild, it looks to me like there might be a very leading, bleeding edge of the (craft) beer drinking world that is interested in well-made English Bitters, German Kolschs, Czech Pilsners, Irish Dry Stouts, and the like. If you study the number of entries in some of these and other similar categories at the GABF and WBC judging competitions, there are more being entered every year, likely indicating an interest at least from brewers in brewing them and, presumably, consumers therefore in drinking them. But, they certainly have not yet projected the sexyness out into the masses, which still seems obsessed with imperial/double/triple versions of any style possible or barrel-aged monster beers or wild/funky bracing sours or anything else palate-busting. Or just simply anything with the three letters I. P. and A. in it. Hey, I love many of these as much as the next adventurous guy or gal that has helped bring the industry along over the years with an appreciation for experimentation and defiance of tradition. But...

I've taken to saying the last few years that what will sustain the craft industry the longest will be the right balance of wild and crazy "innovative" beers and well-made beers that show classic styles well. At Locust Lane, right off the bat, we'll see an ESB (4.4% ABV) with all the right ingredients from Marris Otter malts to Fuggle and East Kent Goldings hops. Gosh, I love the ESB; really looking forward to this one. An Irish Stout (4.5% ABV) that can hopefully be yet another solid local replacement for Guinness to be added to the list along with the likes of Donnybrook (Victory) and O'Reilly's (Sly Fox). Pale Ale (4.8% ABV) with what sounds like a nice blend of Cascade, Simcoe, Chinook, and Citra hops. And an IPA (7.4% ABV), but of course, that brings the same hop profile as the Pale Ale along with a good dosage of Columbus, Tomahawk, and Zeus hops for that nice, solid-IPA sounding beer.

Making an appearance on tap will also be one beer from Wissahickon Brewing Company — likewise opening on April 1, on Schoolhouse Lane in the East Falls neighborhood across from Philadelphia University. In a nice turn of brewing camaraderie, Wissahickon will be serving one Locust Lane beer on opening weekend at their place as well.

Food, you ask? Opening weekend expect to see Nick's Roast Beef and The Flying Dutchman food trucks on site. I'll see you at the bar...or at one of the coveted comfy seats over in the corner. 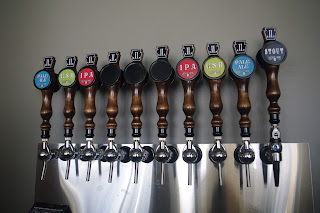 (Five taps for opening day with more to be filled in time.) 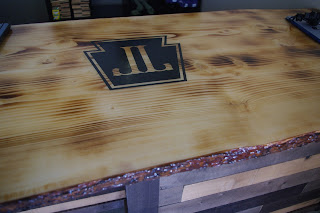 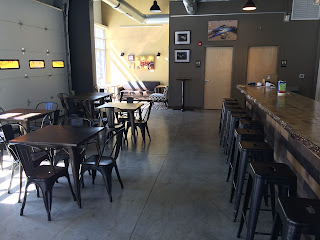 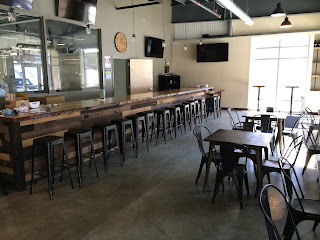 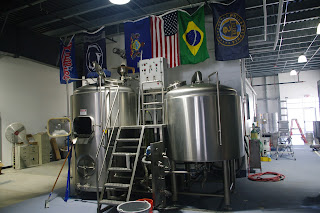 (Flying their favorite colors above the former Cape May Brewing brewhouse.) 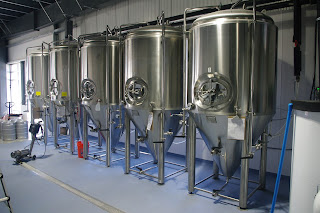 (Shiny conical fermenters a must.) 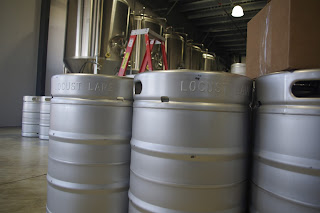 (Kegs are ready for filling.) 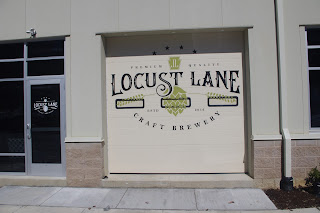 (Come spring at Locust Lane, this door will hopefully be rolled up more often than not.)