Looking back, I really didn't get out much last week. And much of July appears to be shaping up the same. Could be a good thing, or not. I considered holding off but figured it's supposed to be a weekly series and I did, in fact, have two really enjoyable beers last week. One just so happened to be around 12 years old and the other one around 6 weeks. 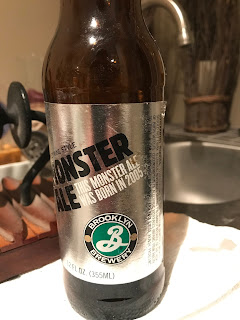 (Patience, they say, is a virtue and sometimes even pays off.)
~ Monster Ale [2005] (10.1%), by Brooklyn Brewery (Brooklyn, NY)
A few nights later, I had a bottle dated 2009 and it came across as lighter and lacking the depth of flavor in the 2005 version. A richness, a slight sweetness, and just a slight sherry-like presence made this a great post-lawn mowing, pre-dinner beer on the back deck. I have one left of each bottle and look forward to performing this test once more. 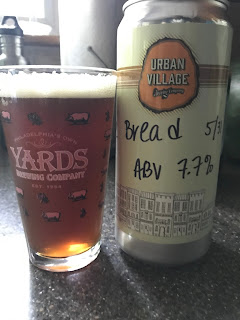 (Crowlers make both an excellent transportation and storing package.)
~ Rye Bread (7.7%), by Urban Village Brewing Company (Philadelphia, Pa.)
It wasn't intentional to hold on to this crowler for so long, but the avalanche and aftermath of Philly Beer Week delayed my consumption. No matter. Crowlers are proven to keep out the light, the air, and when kept cold can still be very good weeks later. If this very good IPA was a percent or percent-and-a-half lower in ABV, I'd drink this all night long. I don't have an Urban Village piece of glassware (do they exist?), so hopefully I get a point for keeping it local in my choice of Yards glassware instead.