Who's brewing today, and why, on #GivingTuesday 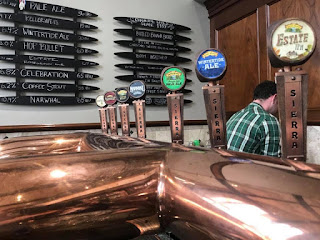 I can't think of a better reason to awaken this dusty beer blog than for a topic quite befitting of #GivingTuesday.

I have long ties to Northern California - personal, professional, and beer/wine/food. Beginning in October of last year and through August of this year, I visited for the first time or revisited nearly all of the breweries in the Bay Area and north that for long have set the baseline for today's surging American beer scene (take it easy there Asheville, Denver, Philly, Portland, San Diego, and Seattle, I've got plenty of love for you too). Sierra Nevada was one of them.

My first ever (finally, I know right?!) visit to Chico was an incomparable holy grail type of visit and so it should be of no surprise that the news of the devastating Camp Fire during the last month caught me off guard when I mapped Paradise, Calif. to discover it only approximately 15 minutes from Chico. It should come with even less surprise that even while the fire was still in the process of being contained, a beer industry leader and pioneer that is Sierra Nevada stepped up to coordinate relief efforts.

Sierra Nevada said that they would brew a special beer and donate 100% of gross sales, yes, folks, gross sales, to the newly-established Sierra Nevada Camp Fire Relief Fund. (I'll save my opinion for another day about organizations that donate a dollar of every beer sold during a two-hour period or, worse yet from my perspective, 10% of net proceeds instead of sales.) Doesn't sound like enough? They seeded the fund with $100,000.

The beer? They're calling it Resilience Butte County Proud IPA. Further, Sierra Nevada asked breweries across the country to do the same. And asked malt, hops, and yeast vendors to "provide raw ingredient donations" (I hope that's true and would certainly symbolize the industry coming together for this cause.)

Today is brew day and by the looks of social media, brewers are doing their job so that, later in December and into January, we'll be able to do our job and purchase/drink/repeat this beer. As this country nears 7,000 brewing establishments, it's impressive to see in the ballpark of 1,000 brewers (according to the SN website) commit to the effort. Here's hoping it's even more than that. No doubt this shows the bedrock camaraderie is still alive that once defined, almost without question, this micro segment of the industry.

I did a quick skim on the list for breweries in Philly and the wider SEPA, NJ, DE brewing region. Hoping I didn't miss any, here are the ones that jumped out to me as our locals that we can be proud of in their support of this worthy endeavor on #GivingTuesday.

P.S. Do you want to make a homebrewed version of Resilience? The AHA provided the recipe supplied by Sierra Nevada and scaled it for homebrewers. Here it is.