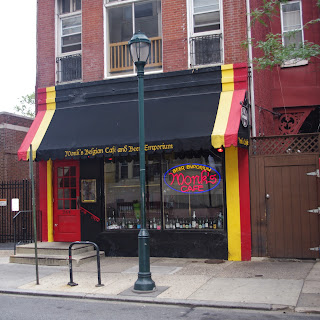 As I attempt to regain some traction here at The Brew Lounge with more routine and predictable writings, it might be fitting that I bring back some of the mojo with a piece about last night's dinner at Monk's Cafe in Philadelphia. Fitting because it was writing of a dinner at Monk's in 2005 that got things going for me here (it's not the prettiest of writings, not to mention a bit humbling). It was a dinner with Dominique Friart of St. Feuillien in Belgium and can be found here if you're inclined to click back through the time machine to the early days of The Brew Lounge.

Last night's dinner also served to snap an unintentional personal hiatus from beer dinners at Monk's. Looking back through my "archives", it turns out to be a bit more than two years since the last dinner. No complaints there — it was a dinner with Vinnie Cilurzo (Russian River), Brian Grossman (Sierra Nevada), and Brian Morin (beerbistro). Wow, just reading it again...no complaints whatsoever. And in no way explains my two-plus year absence from Monk's dinners.

Last night, it was Patrick McGovern, professor at the University of Pennsylvania, and Wendy Domurat of Dogfish Head holding court at the lauded Monk's Cafe in Philadelphia with the full lineup of beers that McGovern has partnered with at the groundbreaking brewery in Delaware over the years in a series that has become known as Ancient Ales. McGovern, in his introductory comments to the dinner, described how it was a tasting of aged Chimay coincidentally with the owner, Tom Peters, of Monk's Cafe that began him on his interest in the concept of aged beers and his pursuit to work with Dogfish Head to uncover some of the believed oldest beer ingredients and recipes.

Throughout the last few years, a dinner concept has sprung forth both at the brewery's pub in Rehoboth Beach, Del. and restaurants across the country that features some of the beers from the collection served with plates of food meant to enhance the tasting experience. At Monk's, the full series was in attendance — minus, it was noted, the Chicha, which got a chuckle from all who know it as the "spit beer". Google it if you'd like to learn more.

McGovern, while not tipping his hand, promises another beer in the Ancient Ales series being worked on to be released in the near future.

Now to some tasting notes:

Amuse Bouche
Ta Henket served with Olive Tapenade
~ It was fitting to begin the dinner with a piece of chewy baguette and Olive Tapenade, which itself has a history that dates back millenia. Perfect as the opening taste for the dinner along with the Ta Henket and its soft herbal flavor.

Fourth Course
Chateau Jiahu served with Brook Trout with Smoked Potatoes and Spinach Puree
~ The triple-play of animal meat courses continued with a fish dish (the Brook Trout, which I later learned is a state fish of Pennsylvania) that had a nice crunchy skin to it and picked up a nice smokey characteristic from the potatoes.

Sixth Course
Kvasir served with Pear Tarte Tatin
~ I typically look to a home run in the dessert course; here, a wonderfully sweet and flaky pear dessert unfortunately didn't play well enough with the sharply tart Kvasir. Still, a tasty end to a wonderful dinner and night at Monk's Cafe. 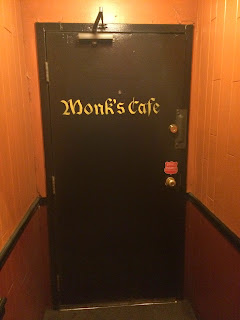