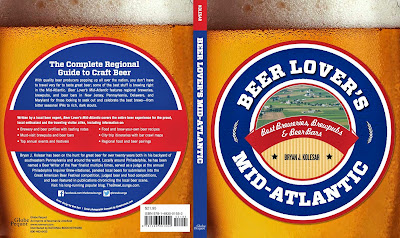 Am I excited? Sure. But it's been a long time in coming, so the last eight months of repeat editing and a whole lot of patience and waiting - which was preceded by five months of furious researching, photography, and writing...plus a month of contract hammering out, etc. - has subdued the initial excitement.

But, nonetheless, the time has come and all of the hard work has paid off. And, yes, I am rather pleased with the end result.

379 establishments visited. 9,444 miles logged. Over 12,000 pictures taken. 416 pages bound up to tell the story of great beer in the four states of Delaware, Maryland, New Jersey, and Pennsylvania.

Some of you have already received a copy. Others will see it from Amazon in the coming days.

Tonight, I'll be selling them at TJ's in Paoli. My local, if you will. I'm spoiled in my neck of the woods, to be sure. Flying Pig, Teresa's Next Door, Station Taproom, Pour House, The Drafting Room, McKenzie Brew House, Iron Hill, and Sly Fox. All can be reached within 15 minutes of my home and work. But TJ's is where I've found myself the most through the years and therefore it makes sense to begin my book signing there. Tonight.

When I walked into TJ's the other day and showed the book to head bartender Scott Blain, he automatically flipped to the index and found TJ's on a few pages, jumped to the main entry, and exclaimed "I'M IN THE BOOK!!!"

That's the way the book goes. It tells the story of the beer. But where it makes sense - and when doesn't it - the story talks about the place, the history, and the people behind the beer.

This, I believe, is a pretty decent book. Not only does it feature those that are making the good stuff. It also features bars and restaurants that are serving it well. There's a chapter on incorporating beer in the kitchen (where TJ's Jeff Miller contributes a Pork Cheeks recipe that I think you'll find otherworldly), a chapter on travel and beer (think: airports, train stations), a chapter on major annual beer events, a chapter on homebrew and clone recipes, and a chapter on the up-and-coming newer breweries & some you may not have heard of yet that are due to open sometime this year.

That's enough for now. See me at TJ's tonight if you're in the western 'burbs of Philly. During Philly Beer Week, I'll also be at Opening Tap, Grey Lodge, Pub On Passyunk East (the P.O.P.E), and Home Sweet Homebrew. I'm also still working with Monk's Cafe, Devil's Den, Free Will, Keystone Homebrew, Flying Fish, and Village Idiot to see if we can get something going during the fast and furious 10 days of Philly Beer Week.

After PBW, Local 44, Iron Hill, and Yards are getting in on the act with book events for me. I'm also eyeing up Craft Ale House, Teresa's Next Door, Kite & Key, and Eulogy for future events. Frederick Beer Week has an excellent final event on June 6 that I'll be appearing at. Next up as the summer wears on and bleeds into the fall will be excursion to Baltimore, the Eastern Shore, Jersey City, central PA, Pittsburgh and western PA all the way up to Erie.

For a full list of events, always kept up-to-date, please visit the Facebook page for the book events.

In the meantime, please support me and these efforts however you can. Buy the book, recommend it to others. Buy it as a Father's Day gift. Visit the Facebook Page. If you're of the twittering set, Follow on Twitter.

I do thank you all for following my writing throughout the ten years that this Brew Lounge thing has been going on. It's because of you all and the growing beer scene of the Mid-Atlantic that this book became a necessity and a reality.