Where there's a Will there's Iron Hill and Free Will 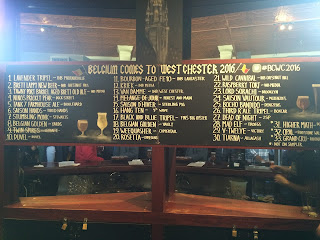 (Thirty, plus three, on tap for Iron Hill's annual Belgium Comes to West Chester)
The last Saturday of January gave the rabid lovers of Belgian beer and sour beer a double-dip opportunity to indulge in the heart of Chester County and Bucks County. If you've not well-familiarized yourself yet with the beer scenes of the Philly suburbs-borderline-exurbs, allow me to point you in the right direction.

The Saturday one week before the Super Bowl each year is when Iron Hill in West Chester, Chester County, shows off at least 30 regional breweries and their respective takes on the broad "category" of Belgian-style beers. The styles typically run the gamut from low-alcohol, wild-fermented/sour beers to over-the-top flavor-popping Trappist Tripels and decadent Quadrupels plus all sorts of tasty twists and turns in between. 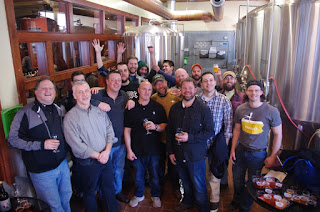 (The Iron Hill family, with both past and present brewers in attendance, at Belgium Comes to West Chester)
They call the event Belgium Comes to West Chester and brewers from participating breweries not only send beer but often show up themselves to take part in the wildly popular casual tasting event. Though, don't take the event too casually because once the crowds pack the dining room and bar room areas, it's not long before the kegs starting running dry. Always interesting to see which ones kick first and this year it was somewhat predictable with the Forest & Main Melange De Jour going first and followed not too far behind by the slightly more surprising Levante Twin Spires. Nice to see this as Levante is growing quite well into their spot on the local West Chester brewing scene since opening last February.

The last couple of years have seen quite a few brewers move on from the Iron Hill family as countless opportunities have continued to present themselves in the constantly-expanding industry. But, true to the family feel and well-run human resources at Iron Hill, a number of alumni either showed up in person or had their beers sent to be poured at the event. I may have missed one or two, but the five that I can quickly point to are: Bob Barrar (2SP Brewing Company); John Panasiewicz (3rd Wave); Jeff Ramirez (Denizens); Vince Desrosiers (Dock Street); and Jean Broillet (Tired Hands). By 5 p.m., all 30 kegs were drained and the after party gatherings were being planned. 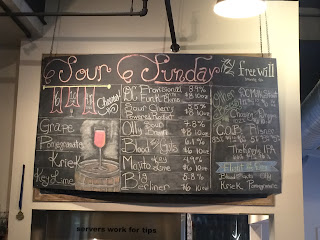 (Feeling sour? Tasting sour at Free Will's Sour Sunday)
Clear across the region to central Bucks County is where you'll find Free Will Brewing Company doing their not-quite-regular Sour Sunday in Perkasie. Prior to January 31, I might have said, "sure, they can afford to do a Sour Sunday once a month". After what I witnessed, I may reconsider that opinion. Did the capacity crowd that descended upon the no-longer-relatively-unknown brewery in Perkasie show up because the crippling blizzard that kept everyone either shut in or sore from shoveling the week before and were stir crazy for a beer event? Or was it the draft list dominated by sour beers (the "regulars" rounded out by some new ones) that drew the crowd? Both, I'm sure.

If you wonder where Perkasie is, you're likely in good company. Think north of Lansdale and west of Doylestown and, if you draw a clock's circle around Philadelphia, at roughly 11 o'clock-ish (a.m. or p.m., doesn't matter). Free Will grew out of its original basement dwellings in 2014-2015 into the upstairs, street-facing space when it became available the prior year. The basement's former brewing space and tasting room is now dedicated to the wild and crazy critter beers that have certainly put the four-year-old brewery on the map. Upstairs, a modest-sized tasting room overlooks the new and spacious (though, getting less so by the month, it seems) brewing space which can also accommodate guests at picnic tables set up amongst the tanks.

On this particular day, both the tasting room and brewing floor were filled with fans of the brewery anxious to taste the usual sour suspects - Grape Sour, Pomegranate Sour, Key Lime Sour, and Kriek Sour - in addition to some new kids on the block like Sour Cherry Powered Rocket (quite perhaps my new favorite?) and DC Provisional Funk (a dry and funky saison fueled by local maltster Deer Creek Malthouse).

If you missed Sour Sunday, the last Sunday of February looks like another great excuse for you to find what Free Will is up to in Bucks County. The brewery is throwing a Clam Bake event - an event with all the fixins from food to beer to tours and even some "bum-style bonfires". 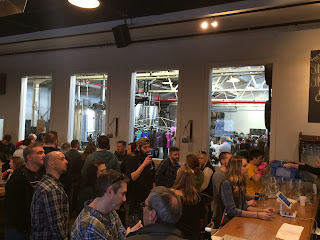 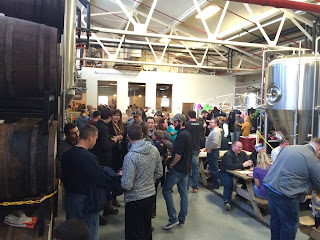 (Capacity crowd in the brewery at Free Will's Sour Sunday)