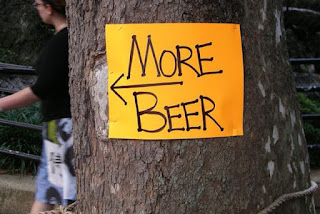 Ah, it's the week of love. However you express your love around Valentine's Day, plenty of opportunity to bring some beer front and center. Enjoy!

While I don't envision any book events for at least the next month, I'll continue to stick a quick plug here pointing you to: a) my publisher; b) Amazon.com; c) BarnesAndNoble.com. As always, I thank you for your continued support.

Boyertown, Pa.
Fri. 2/12; 5 p.m. — When Ballast Point Gives You Lemons at Union Jack's On The Manatawny [Join us as we tap a firkin of Meyer Lemon Sculpin IPA plus other outstanding Ballast Point brews on tap. $PAYG]
Sat. 2/13; 7 p.m. — A Chocolat Pairing Party at The Other Farm Brewing Company [A pairing of fine chocolates and craft beer and cider. $10]

Churchville, Pa.
Fri. 2/12; 6 p.m. — Welcome Shorts Brewing to PA at The Churchville Inn [Awesome draft and bottle list. TVs will be playing Salute your Shorts because this is a boring time of year.  $PAYG]

Conshohocken, Pa.
Thu. 2/11; 6 p.m. — Bell's HopSlam at Flanigan's Boathouse [The highly anticipated Double IPA will be tapped at 6 p.m. and cans will go on sale in our Below Deck Bottle Shop at the same time. $PAYG]

Exton, Pa.
Sat. 2/13; 1 p.m. — HopSlam at The Drafting Room [A Valentine's Day treat for all our beer drinking friends along with several other awesome beers you won't want to miss.  $PAYG]

Kulpsville, Pa.
Sat. 2/13; 4 p.m. — Beer and Chocolate at CJ's Doghouse [This year we have some incredible sought after beers that are paired specially together.  $PAYG]

Lancaster, Pa.
Fri. 2/12; 5 p.m. — Starr Hill Brewery Hearts and Hops Night at Federal Taphouse [A rep from Starr Hill will be out and about sampling some of these great beers.  $PAYG]

Shawnee-on-Delaware, Pa.
Sun. 2/14; 12 p.m. — Anti-Valentine's Day at ShawneeCraft Brewing Company [Food will be available from noon to 4 p.m. and Public Displays Of Rejection will take the stage from 4 to 7 p.m.  $PAYG]

Wilmington, Del.
Thu. 2/11; All Day — Nugget Nectar Event at Ulysses Gastropub [We will be featuring Tröegs Nugget Nectar of course as well as other limited release beers.  $PAYG]