If you follow the beer events calendar that I put up here each month and week, you likely noticed that this last weekend was stuffed with reasons to get out and great drink beer. The weekend was capped with the Super Bowl and throughout was filled with great weather.

Whittling the list down was no easy feat. If traipsing around the city was my thing, I likely would have stopped in at Bar Hygge for its first anniversary, or Devil's Den for brunch, puppies, and football, or Kite & Key for a Firestone Walker event with cookie pairings.

But I chose to stay home in Chester County and hit up two events on Saturday and one on Sunday. And before you sharpen the first dagger, yes, I'm including Teresa's Next Door in Wayne under my Chester County umbrella. What? Doesn't make sense? When I need it to fit the narrative, then #AlternativeGeography is what works best. It's less than a mile from the county line. It's a rounding error. Big deal, right? Everyone does it these days. End snark. 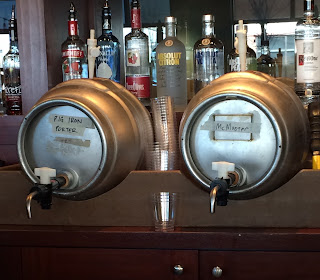 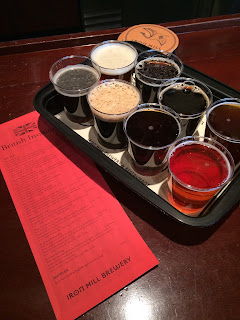 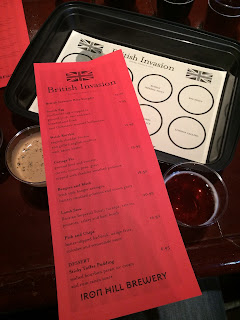 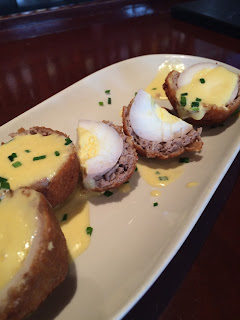 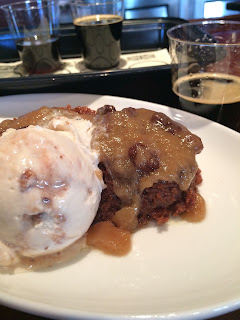 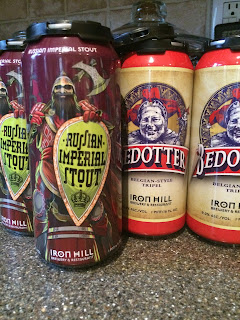 (Two of the most solid canned offerings from Iron Hill.)
As Iron Hill has continued to grow (see yesterday's news event if you're not yet familiar with their just-announced planned thirteenth location), I've continued to frequently comment about the consistent company culture fostered by the brewery and the restaurant ownership and management. It's evident talking with staff and observing the numerous events of a shapes, sizes, and stripes throughout the year.

I'd been to the "British Invasion" event at Iron Hill's Phoenixville location before. Each time, I was one of just a few at the bar in the early hours until more would slowly trickle in. This time, I parked the car in the ever-more-difficult-to-find-a-parking-space downtown Phoenixville and walked in to a nearly packed Iron Hill. All but one bar seat was taken and nearly all barroom tables were likewise occupied.

The brewers (Matt Gundrum and Will Mink) were joined by regional brewing manager, Kevin Walter and senior head brewer Tim Stumpf. Together with the service staff they put on a smooth and well-run, tasty event — even in the face of many dozens of flights being passed nearly nonstop across the bar. I've always gravitated to classic styles from the other side of the pond including well-made English and German beers. So this event speaks to me not only for my selfish satisfaction but also in gratifyingly that there are plenty others out there enjoying these beer styles as well. And trusting that events like this continue to open eyes in the mass market that there are plenty of great beers and styles apart of the latest fad beer.

Back on topic — For this event, the brewery rolled out eight beers including English-style IPA, Amber, Brown in addition to Wee Heavy, Russian Imperial Stout, Chocolate Stout, and the beautiful Pig Iron Porter and McMaster Scotch ale from bartop pins.

The kitchen stepped up its game as well going with the obvious Scotch Egg but then also throwing Welsh Rarebit, Fish 'n' Chips, Banger and Mash, Cottage Pie, and an amazing looking Lamb Stew. I found the strength to resist the latter and instead moved without pause to the Sticky Toffee Pudding. An incredible plate to finish off the event. If only I had some ABVs to spare, the Bedotter would have been the perfect pairing. But it was time to head over to Wayne and the Super Saturday event at Teresa's Next Door. 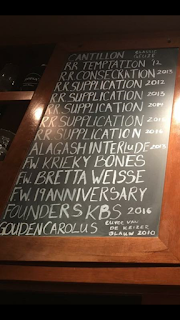 (Half of the goodies available at Teresa's Next Door's annual Super Saturday event.) 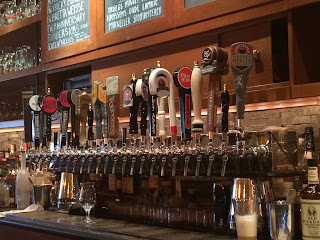 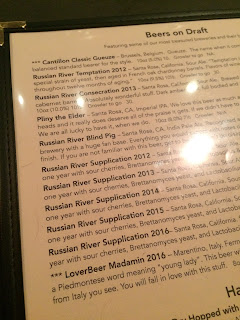 (Always fun when bars "find" vintage verticals in their basements.) 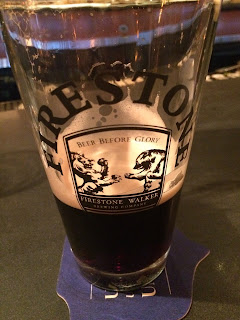 (Excellent Nitro Velvet Merlin from Firestone Walker.)
Well-traveled and well-informed beer lovers (obviously any of you reading these words, no doubt!) know of Teresa's Next Door along the "Main Line" of Philly's western suburbs. Co-owner Andy Dickerson and bar manager Chris Peters have worked tirelessly to create relationships around the world that result in some of the most interesting and sought-after beers landing on the tap and bottle menus.

Each year, on the day before the Super Bowl, the bar puts on Super Saturday, an event that features big flavors of hops, sour, and barrel-aging. This past weekend, therefore, it was no surprise to find eight beers from Russian River, one from Cantillon, and several more from geek drool-inducing Founders and Firestone Walker. Not to mention, an favorite all-timer of mine, Captain Lawrence Rosso e Marrone.

After nearly ten years in business, the TND crew still pours plenty of care and love into the details of each special event, which typically include special food items to complement the beers on CO2, nitro, handpump, and from the bottle. When I arrived mid-afternoon, it was no surprise to find the Classic Gueuze from Cantillon already off the draft tower. However, plenty more remained as the initial crowd surged had mellowed into a steady buzz for the remainder of the day. Good thing I employed the car service option. 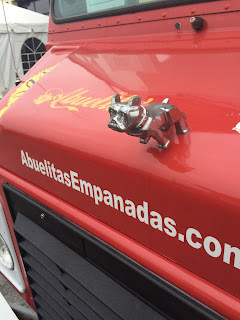 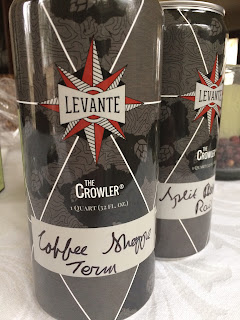 (Always good to have plenty of backup beers for the Super Bowl.)
Sunday morning came down at West Chester's youngest brewery, Levante Brewing Company. After a decadent Saturday and with a Super Bowl on the nighttime docket, it only made sense to refuel with a couple beers, tacos, burritos, and empanadas.

Similar to the joy of watching a veteran like Iron Hill continue to grow, it's just as gratifying to watch the bumper crop of young breweries that exhibit strong markings of those that should "make it" - such as Levante. Here at the beginning of its third year, the brewery has really its stride and is showing it in the quality beers, the passionate fans, and welcoming staff and comfortable atmosphere in the taproom.

Parents of children and dogs alike find Levante welcoming and the brewery's location off a busy road on the outskirts of West Chester in a low-rise industrial park makes it a perfect location for weekend beer events. No stranger to food trucks, nearly a permanent fixture adjacent to the taproom's rollup garage door, for the Kegs 'n' Eggs event, Levante had an enclosed outdoor tent for plenty of extra seating as well as not one but two food trucks.

Levante has been doing a house Saison for Split Rail Tavern in downtown West Chester for quite some time, so that was an obvious go to in crowlers for late night football viewing. They also do a Rye Saison — Reminiscent — which given my style proclivity I immediately checked out as well. Just a touch spicier and bit less sweet than the Split Rail, but both fantastic in their own right. Then, throwing ABV caution to the wind, the Coffee Shoppe Terminology called to me as the perfect brunch beer, regardless of clocking a solid 10.3% ABV inside the local coffee roasty and chocolatey imperial stout. So, yeah, that made its way into a crowler to go as well.

If Saturday had not been so decadent and if it was not still barely 2 p.m., I would have made my way further into the IPAs and sours currently on Levante's menu. And I would have asked more questions about expanding into available space in their building and timetable(s) for that. Plenty of good stuff happening on both sides of the bar at Levante. No wonder it's one of the regions most talked about young breweries. Oh, on that note, I should link you to Ale Street News' most recent issue where I wrote even more about what they have been up to in West Chester.