Was it a light week? In some ways, yes, but in many ways just the same beer-drinking week as any other week. But, there was just one that stood out, way out. 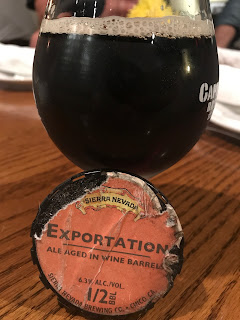 (A little age works for some beers, like this one.)
~ ExPortation (6.3%), by Sierra Nevada (Chico, Calif.)
Brewed by some of Philadelphia's finest retailers of Sierra Nevada beers in 2010 at the brewery's Beer Camp in Chico, the base beer (ExPorter) was aged in Pinot Noir barrels for nearly a year at famed Russian River Brewing Company and revealed as ExPortation in 2011 in time for Philly Beer Week.

Thanks to a heads-up from Matt Guyer (Beer Yard) and Gary Fry (Craft Ale House), there was a bit of a reunion for a handful of folks that were in on the brew day with me as an interloper. All agreed that the beer has held up quite well and the tasting crew that came out for it put a decent dent in the 1/2 keg. Cheers, guys, you can certainly be proud of this one!

While I haven't checked for certain, since this was tapped nearly a week ago, I'd be surprised if it was still on tap. So, given that, this may be just about the most useless beer review that I've shared thus far. Unless, of course, there's yet one more keg hiding in some great beer bar's cellar. You know how those cellars can get.