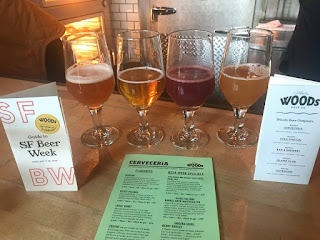 In the dead of a cold Northeast winter. Still in a post-Super Bowl state of both euphoria and disbelief. In search of great West Coast beer and people. It was a great time for me to head west and catch up with the current state of San Francisco Beer Week (SFBW). It'd been since 2013 since I last partook. Not to say I haven't been to the Bay Area at least a few times a year since then, just not during its annual 10-day celebration in February. My good news to report is that it is doing quite well.

I had a solid 3.5 days to take in what I could. Weather wouldn't be an issue as the weather - a bit chilly to locals, which is fun to see - was solidly in the 60s, touching 70, during the days and 50s at night. Dry, sunny, and barely a cloud in the sky. Perfect for my sum total of walking 17.5 miles between 18 establishments in San Francisco, Oakland, and Berkeley. (Turns out, as a result, that even with the decadent eating and drinking that ensued, I came home 3.2 pounds lighter than when I left, fwiw.)

After an unscheduled diversion to Salt Lake City on the nonstop flight (apparently flying into 200mph headwinds is enough to burn twice as much fuel as would otherwise be typical), I wound up nearly two hours behind my original schedule and I worked extra hard to catch up. First up was an absolute must during any good beer drinker's visit to the city - Magnolia. The brewpub in the city's storied Haight-Ashbury neighborhood continues to play a significant role in the city's beer landscape and during SFBW. On this particular Thursday, it was a Festival of Firkins event that I was not going to miss, no matter how delayed my flight. But my timing was actually fortuitous as I ran into a bunch of friendly faces that likewise define the current and past beer scene of the region. Fal Allen (of many in the past, and currently at Anderson Valley), Dick Cantwell (formerly Elysian, currently of Magnolia), Jeffers Richardson (Firestone Walker, ok granted a bit south), Steve Shapiro/Gail Williams (Celebrator, Beer by BART), and I feel like one or two more that I'm not recalling at this point.

After a couple nice firkin-fed beers and a burger, my post-flight strength was regained and I was off. A brisk walk down the hill (yes, past Toronado, no time for a stop at this point) and into the top of the Mission District had me sipping on a quick flight at Woods. Last time I was there, it was still called Cerveceria Mataveza and there was only one location. Now it's called Woods Beer Co. and there are five locations, the other four being in the Sunset neighborhood, in the Russian Hill stretch of Polk Street, Treasure Island (i.e. the "pitstop" along the Bay Bridge), and Oakland. They've always impressed with the simple, but tasty, empanadas and beers that play around with a variety of atypical flavors and aromas in beers. For example, for this special release, I was floored by the interplay of peat and hops in their Islay IPA of which I was initially skeptical. Until I tasted it. Also, the Berry Breeze "smoothie", Local Honey Herbal Ale, and Morpho (with Yerba Mate). These guys are certainly doing well as they grow.

Monk's Kettle is just a couple blocks away and the timing was perfect to stop by and be served up a vintage flight of Alaskan Smoked Porter. 1998, 2008, and 2017. I don't find that this beer is all that magical after a few years. The ten and twenty year old versions here were fine, but nothing spectacular. This beer still after so many years, so many award-winning years, is a very good beer. But, in my opinion, better younger than older. These types of experiments, nonetheless, are still fun to try.

Now shuffling on down eight blocks or so to Pi Bar (they open at 3:14 p.m., get it?) where the annual Russian River event was going down. Of course I was a few hours late for this and never actually had any intentions of getting there early enough for Pliny the Younger, but I was still able to easily slide up to the bar and get a glass of the wonderful Sanctification. Annnnnnd, we're walking.

Next up was Barebottle, the new brewery in Bernal Heights, the neighborhood below the Mission. And, the neighborhood that I've heard some say reminds them of an Northeast city-style neighborhood. I guess I could see that. The brewery is impressive not only in its beers, but also in its layout, conducive to hosting large crowds, plus a front "porch" for a food truck and milling about. I was there moreso for the collaborative ice cream with Smitten. I got there in the nick of time as they were beginning to run out of flavors. Some sweets and hops was just what I needed before climbing the hill 3/4 mile to find my last stops of the night along what was being billed as the Bernal Heights Pub Crawl.

It was hosted by four local bars and their owners, Marin Brewing Company (and lead brewer Arne Johnson), and Monkey Paw Brewing Company (from San Diego). I already climbed uphill to get to Holy Water bar and meeting up with these good folks positioned me squarely to head down the slippery slope of the night. Couple of very nice beers here included Marin's Flake News Imperial Stout and Monkey Paw's Back In The ESSA English Pale Ale... and then Chris Cohen announced that we should head back to his spot, Old Devil Moon, where the crawl had begun. And, we drank some beers. Some of this and some of that. And some of the vintage North Coast Old Stock that Cohen graciously shared.

I'd been up for 21 hours; so at this point, it seemed a wise idea to call it quits.

Jet lag had me up multiple times, naturally, through the night as I willed myself to "sleep in" until, like, 7 a.m. Caught up with a bunch of odds 'n' ends that were lingering online for me (yes, I'm nearly at Inbox-Zero!) and then went off for an early Pho lunch. Caught some Chinese New Year celebrations, got a long walk up Nob Hill, down Nob Hill, up Russian Hill, down Russian Hill and all the way down to Market Street where I caught the BART train across the Bay to Oakland for the first event of the day, and quite possibly one of the favorites of my trip.

I've heard of Hog's Apothecary before, but had never been. On this Friday, they were hosting the well-known Mark Jilg of Craftsman Brewing (Pasadena) for tutored tastings of three flights. This was an extraordinary mid-afternoon weekday event that held the rapt attention of roughly 30 attendees. Jilg's casual, fun, and informative (not to mention a wee-touch profane for added color!) commentary filled approximately 15-20 minutes during each flight's tasting. The quality of Craftsman beers is already well-documented, but each flight had three unique and special beers and each had one stand-out for my palate. Two exceptional standouts included the delicious and malty rich Father Divine Dunkelweizenbock and a 2013 version of the barrel-aged dark sour El Prieto.

Tough as it was to leave, it was time to head back downtown and meet longtime friend, and transplant, from the East Coast. Kevin was meeting me at Schroeder's, an historic German restaurant over a hundred years old that I've walked by countless times, but never stopped in for an Andechser or Gaffel or Paulaner, etc. On a crazy, busy Friday night happy hour, they were pouring Nefiltrovany - unfiltered and unpasteurized Pilsner Urquell. This is a treat not often found in the States, but according to the bartender, something they do every few months or so. So maybe not quite as special for SFBW as I'd imagined. The PU crew, during my hour long visit, kept to themselves at a large table. That was alright for me, though not generally good beer event behavior, because trying to have a civilized conversation at the rollicking bar would not have been very comfortable or ideal anyway.

No matter, because I was heading next to Thirsty Bear and one of the first SFBW events that I'd ever attended during the inaugural year of 2009 - Cask &amp Queso. A very well-conceived event that has certainly grown more popular since its first year one, which was more sparsely attended. The certified organic brewery goes to great lengths to line up a couple dozen firkins of area beer and pair them with some excellent cheeses, many likewise from northern California. Making a dinner out of nothing but beer and cheese (and maybe a few crackers and pieces of bread) is not all too unusual for me. Had a bunch of tasty ones (including camping out by the Humboldt Fog), but as for the best pairings, nothing came close to Anchor Brewing's O.B. Bonfire Smoked Lager and Bleu Mont Cheddar or the 2017 Thirsty Bear Barleywine and Cowgirl Creamery Wagon Wheel Raclette.

Then, jet lag clawed another night away from me.