San Francisco Beer Week 2018 - where to begin, where to end 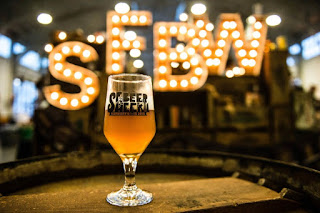 If I'm not mistaken, it's been 5 years since I've last hoisted a beer with/at San Francisco Beer Week. Of course, I've been in northern California numerous times otherwise, but not during the even-more-beer-rich-than-usual time of year that is the post-Super Bowl part of February in the Bay Area. I figured it's about time I right (write?) that ship.

Of course, this year post-Super Bowl is much, much sweeter with plenty of wonderful memories from the last month of football here in Philadelphia. But enough about Philly.

Hey San Francisco! How you doing out there at the midpoint of SFBW '18? It's time for me to figure out how to make the most of the remaining 4 SFBW days in the Bay Area. I missed more than I care to think about in the first 6 days, but these remaining 4 look like they can be equally memorable.

Here's what I've got on the tentative schedule. Let me know if you think I'm off-base or am missing something that should not be missed. Of course, I've got a bullpen (like how I've now pivoted to baseball, with pitchers and catchers reporting this week?!) full of alternate events in case I'm looking for a detour. 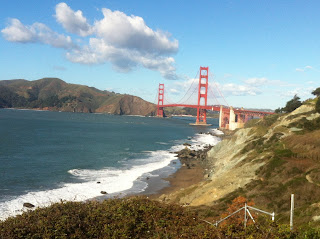 Thursday, Feb. 15 (day 7)
Magnolia has long been a not-to-miss destination for me in the city's Haight-Ashbury neighborhood. So why should I not step off the plane, drop my bag, and proceed immediately to its Festival of Firkins? Why, I think that's exactly what I'll do.

Then, I could make my way over to the Woods' special release of its Islay IPA over at its original location - the Cerveceria - in the Mission District. A healthy walk or a short Lyft ride will get me to what sounds like an interesting mash-up of flavors and that's something I've always been able to count on Woods for in the past.

Just a few blocks walk to the Monk's Kettle and I'll hope to keep my visit short (good luck, right?) as I check out Five Years of Firestone Walker vintages. Monk's Kettle has been around long enough to call it one of the earliest bars in the city to focus on Belgian-style beers from local and overseas breweries.

Again, just a few more blocks to walk my way over to Pi Bar. Five years ago, I went to their annual Russian River event. It's very worth the time spent, considering (the pizza too) a lineup of both usual and rare beers from the brewery only 90 minutes away. I remember thinking that Californians wouldn't line up the same way for Russian River as they do here in Philly. If there's a line, I'll skip it this time in favor of discovering newer stuff.

Newer stuff like the Old Devil Moon Marin & Monkey Paw Bernal Pub Crawl at the bottom of the Mission District in the Bernal Heights neighborhood. Along the pub crawl, which should take me just about to the point of jet lag kicking my butt, I'll be sure to get some dessert at the nearby Barebottle Smitten Ice Cream – IPA Ice Cream Collaboration event.

And, if I really accomplish all that, complete with all the walking and with no side distractions, I will flag a car and call it a successful first day by the Bay.

Friday, Feb. 16 (day 8)
I'll sleep well, no doubt, but the jet lag will surely have me up and at 'em earlier than a normal human would wish. That should give me plenty of time to walk across town to the Richmond neighborhood near the Presidio. By the time I arrive, the Richmond Republic Draught House should be open where I can get into some lunch and the Fieldwork Tap Takeover daylong event. I got to know Fieldwork a couple of years ago as they were just getting off the ground. Now they've wowed the locals enough that they have five locations around the region.

From there, I figure I'll find my way to the BART train system and get over to Oakland for what sounds like a tasty event at The Hog's Apothecary. It's called the 5th Annual Craftsman Brewing Showcase, which should give me a good update on this Pasadena-based brewery that I haven't bumped into in around four years. Plus, the sandwiches look amazing.

Then, I'll get myself back into the city where I'll be challenged to knock off two more locations before I hit the peak of the night. First, there's a Pilsner Urquell: Nefiltrovany at the historic Schroeder's in the business district. This, to me, is a must-do. And, then I'd like to zip on over to the ballpark, might need a car ride to do this, for a couple of Allagash's and The Bruery's finest. They can be counted on to roll out some of their most creative pourings for these kind of events. The ballpark, by the way? Where the Giants play and home to The Public House.

Capping my night off is an event that I did in its inaugural year back in 2009. Casks & Quesos. Lightly attended that year, but I understand cask-conditioned beer has caught on and the event has survived and flourished through the last ten years. So glad to hear that because it takes place at one of what I believe is the city's more interesting brewery venues -- Thirsty Bear. Spanish, organic, flamenco, and good beer. Been doing it for over 21 years. Plus, Ron (owner) and Brendan (brewer) are just plain fun to chew the fat with over a few beers.

This event gets me very close to my home base and I'm sure that after another day of walking, eating, and drinking, the bed will look as inviting as ever. 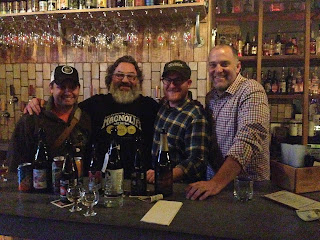 Saturday, Feb. 17 (day 9)
I "discovered" Drake's Dealership (an outpost, of sorts, for the nearly 30-year-old Bay Area staple) in Oakland's Uptown neighborhood with my sister-in-law a couple of years ago. Love the open-air atmosphere there and with leaving the frigid northeast behind for a few days, sitting outside for a Beer Brunch event featuring Beachwood & Drake's Collaboration will be exactly how I'd like to begin my Saturday.

Since Woods has one of its five locations near the BART train station just a few blocks from Drake's, I'll likely pop in for another of their releases -- this one, the Divine Origins Release. They describe it as "...our genre-bending odyssey into the unexplored worlds of natural wine, spontaneous fermentation, and barrel aging." Therefore, I shall try it.

If I have time, I'd like to slip into The Rare Barrel for a PAYG event called Celebrating Women In Beer. It's in the general direction of my travels and an opportunity to combine a stop at one of the region's finest plus the chance to pay due attention to some of the brightest ladies in Bay Area brewing.

The general direction I spoke of takes me next to Trumer Brauerei in Northwest Berkeley. It's where Celebrator Magazine is, um, celebrating its 30th anniversary in print. I last joined this party for their 20th in 2008. I'm sure it will be every bit the party that I remember from back then in honor of this important contribution to beer information and journalism.

I'll hop the BART train back downtown and if I have any gas left in the tank, I'd love to nightcap at Hopwater Distribution that will be hosting a North Coast Brewing Tap Takeover at their location just north of Union Square. I'm sure this could be a stretch event for me based upon how far I get stretched during the Celebrator party. But, do I think I need/want an Old Rasputin nightcap? I think we all know the answer to that question.

Sunday, Feb. 18 (day 10)
How to close out and honor the last day of SFBW '18? With more food and beer, duh. Almost every SF trip for me includes a stop at 21st Amendment. Sunday morning will give me the chance to stop in for a brunch event called Brewer’s Tea with Fatted Calf & Brewers Guild. I can't imagine how this could be wrong. Then, to stay in the city or wander abroad? On one hand, I'd like to get over to San Leandro (coincidentally the home of 21st Amendment's massive brewery) and check out Drake's original location where they're hosting Grillin’ & Chillin’: Family Affair (yup, that'd more food on the menu). While in the neighborhood, I'd check out the relatively new Cleophus Quealy Beer Company and its Chilaquiles & Chill event.

Or, I'll simply stay downtown and putter around to the bullpen of backup events that I mentioned at the top.