Beer and Food together at The Brewers Plate... and dinner at Wegmans 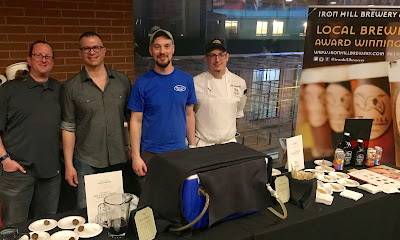 (click picture for a full gallery of pictures from Brewer's Plate 2018)
In my attempt to offset my somewhat erratic posting nature while staying both timely and relevant (hey, who said that?!), I'm gonna pair up two recent food and beer events worth sharing with you. One will be obvious and the other, maybe not quite so much so.

First and foremost on the whole food 'n' beer subject is (and has been now for 14 impressive years) the annual Brewer's Plate event in Philadelphia. I list it as one of the region's must-do annual events on pages 356-7 of my "Beer Lover's Mid-Atlantic" book. Like how I worked that in there? 😋

For the fifth consecutive year, it was held at the equally impressive Kimmel Center on South Broad Street. This annual event has certainly criss-crossed the city through the years, stopping at some of the most striking venues -- the first three at Reading Terminal Market, followed by one at the Independence Visitors Center, then three at University of Pennsylvania's Museum of Archaeology and Anthropology, and two at The Constitution Center.

What has remained consistent, regardless of the venue, is the high quality presentation of food and beer. Not presented mutually exclusively, but rather quite intentionally where brewers are matched with chefs well in advance in order to serve, next to each other during the event, beer that complements the food and vice versa. Many foods served have even used the specific beer in the cooking and presentation. This original formula has continued to work extremely well since the first year and I expect it to continue as a unique and standout event in the industry.

This year it was held on a Friday, when in the past it's been held on a Sunday. There's definitely argument for there being less competition on the events calendar hosting the event on a Sunday. And, if I'm not mistaken, I believe it's been typically held earlier in March. This year was on the last Friday of March, which happened to coincide with both Good Friday and the beginning of Passover. To what degree this impacted attendance may not be quantifiable with any precision, but compared to past years, it was obviously not a sell-out as most other years have been. While I strongly suggest continuing to hold Brewer's Plate on a Friday night, good money would say that it won't be held on a Friday that coincides with major holiday(s).

On the topic of attendance, it's also fair game to discuss what makes a successful/popular beer event these days. It doesn't take high-order analytics to see that beer event calendars these days are dominated more than ever by simple events - tastings, tap takeovers, special one-day releases. In other words, low overhead and easy-to-execute (and therefore cheaper to the consumer) events.

Which brings us to the beer dinner at Wegmans in Malvern last week. Seven attendees may be discouraging and speak to what constitutes a popular beer event format these days.  In past years, for example, at least half of Iron Hill's locations would, nearly without fail, host a beer dinner per month. Numerous other establishments across the region (both city and suburb) would do likewise. Now, they're extremely more the rare exception than the rule. Wegmans, in the past, has been known to put on food pairing events, beer dinners, and the like from store to store. Now, it's basically just free samplings from time to time.

But none of that should take away from the five-course dinner they pulled off with beers from Founders (by way of Stockertown Beverage and its representative, Jess Kearney). I wouldn't be writing about it if it didn't deserve the recognition. Apart from the odd serving size of the first two beers (Gold Rush Lager and All Day IPA) - four, maybe five, ounces? - the dinner and pairings were well executed. Kearney and the chef introduced each beer and plate of food. Each dish was a unique creation for the event and not available on the standard pub menu at Wegmans. Serving sizes were generous and the pairing standout of the evening was a toss-up between the lamb/Dirty Bastard and coffee cake/KBS (2018).

The electricity was out for at least a half hour when we first arrived and we wondered at first if we'd be searching for dinner elsewhere. This was the result of the deluge of late winter/early spring rain, snow, and wind that have tormented the Philadelphia area. Fortunately, the electricity came back, the dinner was on, and was pulled off without a hitch. I hope to see more from Wegmans in the not-so-far-away future.

Oh, did I mention the icing on the cake? Figuratively, not literally. A bottle of three-year-old (four, if you count the year of barrel-aging) Kentucky Breakfast Stout to take home for later enjoyment. 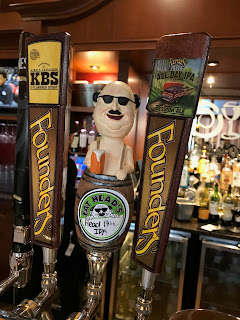 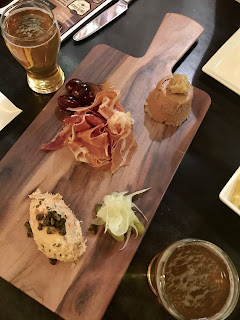 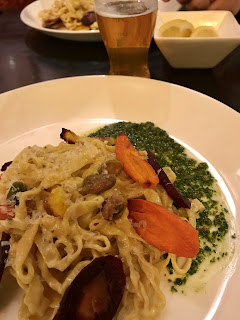 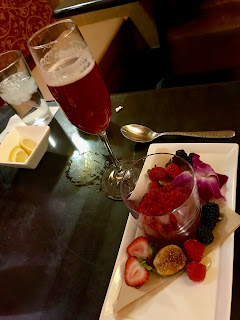 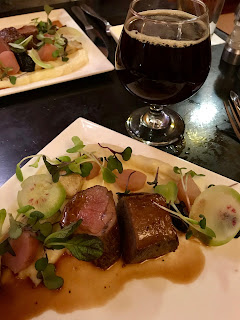 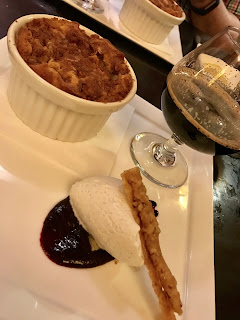