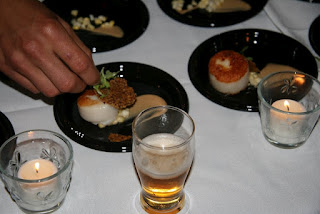 (Click the picture for a full gallery of event pictures)
I was in northern California last week. Sonoma, Sebastopol, San Ramon, Oakland, and of course, San Francisco. Much more on that to come.

It was a shame to have missed the highly-anticipated Philadelphia version of Ommegang's Hop Chef held at World Café Live in Philly last Tuesday July 10. The Chefs had been to Ommegang in Cooperstown, NY, baited and berated each other on Twitter, and showed up ready to prove they were the best at incorporating an Ommegang beer into their kitchen creations.

A celebrity panel of judges including Mat Falco (Philly Beer Scene), Arthur Etchells (Foobooz), Drew Lazor (City Paper, Saveur, among others), Emilio Mignucci (DiBruno Bros.), and Jen Carroll ("Top Chef" and hot chef about town and, reportedly, NYC) would have the final say. And, so would the people as they cast their vote for People's Choice.

I would have been there in a heartbeat with my media pass. But, since I was a few thousand miles away, I enlisted trusty Brew Lounge foot soldier, Mike Rizzo to file his report on the event. You should probably see an immediate improvement in the food pictures over what I might have otherwise submitted for your review. I knew he was good with a camera and that he's got some of that foodie thing going on too, so I figured it would be a winning combination.

Just hours after the event, I received the quickly-filed words and pictures from Rizzo. I've finally had a chance to pour through the results, so let's see what he's uncovered for us.

"The food was some of the best that I have eaten in Philly and I have been to many of the top restaurants in and around the city. There was plenty of Ommegang to be had as they had a table setup on the dining floor and all the Taps on the elevated bar were tapped with Ommegang beers. I never had to wait more than a few minutes to get topped off."

Sounds like a great way to open an event review. From the opening sentences, I knew the disappointment that I could not attend was real. Let's see how the pairings worked out.

"I think it would of worked much better had they been pouring the paired beers at each chef's table so that as you picked up the food, you received the correct beer. To me and others that I saw, it became more of a 'get what you can food-wise and hope that you have the correct beer on hand'. I found myself many times either having an empty beer or the wrong paired beer when I got to the table. There was usually a wait for the food and you did not want to get out of line to get beer while you were waiting for the food in fear of the food running out. They should have had people pouring the beers at each station for people tasting the food, to ensure you knew you were tasting it as it was meant to be."

This is an interesting coincidence because it reminds me of how at last summer's Belgium Comes To Cooperstown event at Ommegang, I found myself sipping on a beer intended for a bowl of mussels that was still be completed by the chef. Granted, they're busting their tails to keep up with the line and demand, but at a pairing contest, you surely do want the benefit of beer (and enough of it) to consider with the plate of food. Not a show stopper, but interesting to note from an organizational perspective.

"I did not see many people from Ommegang there offering advise or explaining the beers that they brought. It seemed that they were just pouring them and keeping the lines moving."

I wonder if there wasn't an Ommegang informational-type table where attendees could learn more about, maybe take home some product sheets of, Ommegang's family of beers. That would seem to have made sense. I know regional representative, Megan Maguire, loves to talk about their beers and I'm sure she was doing a bunch of that as she circulated. In a crowded event, you can't catch everything that's happening, so maybe Mike missed the Ommegang representation.

"As for how the beers were paired, Three Philosophers was the runaway chef's favorite, being paired with four dishes, all desserts. Witte, Abbey, and BPA were used in two dishes each and Rare Vos and Hennepin were both used in one."

That makes sense. Three Philosophers has got the maltiness going on as well as the cherry addition which makes this great for both drinking by itself and incorporating into food dishes.

Next, Mike provides a chef-by-chef rundown along with some brief notes.

Email ThisBlogThis!Share to TwitterShare to FacebookShare to Pinterest
Categories: Beer and Food, Events and Gatherings, Ommegang