More locals than you can shake a mash paddle at 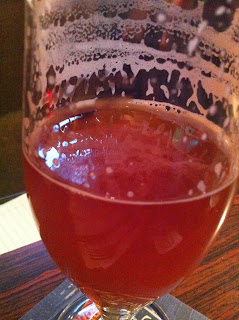 (Double Overhead IPA from Ship Bottom Brewery would not wait for a picture)
If you tune in to my social media channels, you may have noticed that I've been lately making up for lost time by getting out to some quality events around the Philly region. Anniversary parties, special appearances of people and their beer, etc.

Two of the events have featured "the little guys". For all the talk of the explosion in nano- and pico-sized breweries, it's nice to see bars paying attention to them and giving them some tap space to showcase their talents to the public.

A couple of weeks back, TJ's brought in Armstong Ales from nearby Phoenixville. I only had 25 minutes or so before catching a train, so I made the most of it by chatting up the owner, Steve Armstrong, for a few minutes and sampling some of his beers. I learned of his setup already established in a commerical space off of route 23 in Phoenixville and was really pleased with the Scrupulous Lupulus IPA and Bold Thady Quill Irish Stout that I tasted. He's on his way.

Last night, it was a visit to Capone's in East Norriton Township to find out what Ship Bottom Brewery is doing. Owner Rob Zarko has been homebrewing for nearly 20 years and has turned his home garage into a 1-barrel commerical brewing space where he's putting out beers that people are talking about. I just missed a beer of his when I was researching an article about the Borough of Ambler at one of my stops, the Broad Axe Tavern. So, he's been on my radar now for a little while and last night presented the perfect opportunity, since it's also been too long since I've paid a visit to Matt Capone and his crew.

Starting off with a sessionable IPA (at 4.4% ABV) called Stupid Paddle IPA, brewed in conjunction with Pinocchio’s of Media, was the right way to go, but the Double Overboard IPA might have been the star of the night for my palate. At a reported 10.4% ABV, it almost scared me off, but I'm glad I hunkered down and dove into this deliciously smooth and citrusy double IPA which hid the alcohol quite well. If I wasn't driving, I'd have had a second for sure. 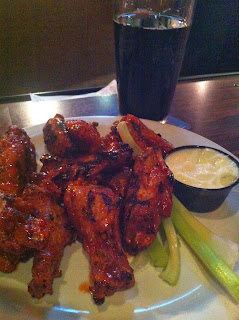 (Capone's famed Bee Sting Wings and a Baconator Stout from Ship Bottom Brewery.)
After those two beers, some food was in order. Capone's e-mail announcing this event also mentioned their famous Bee Sting Wings now available on Thursday nights when they previously were only available on Mondays. I knew nothing of them — but they're "world-famous" right? — and they made the perfect choice to go with the Ship Bottom Baconator, which was packing its own heat at 8% plus a combination of coffee, bitter chocolate, and a bit of smokiness. It went so nicely with the wings which themselves struck the perfect balance of heat, spice, and sweet characteristics.

The Barnacle Bottom Stout is another beer that sounds like it's worth our while to keep an eye open for but was not available last night. You might have picked up that many of the beer names, as well as the brewery name, make reference to his wife's hometown on Long Beach Island and adds a nice element to the brewery's back story.

No doubt, it's a fun time to watch the beer industry grow with endeavors of every size and ambition. Armstrong Ales in Chester County, Pa. and Ship Bottom of Delaware County, Pa. are two worth watching.

Cheers to successful 2013, their growing businesses, and an ever-expanding access to a variety of great beer.
At the risk of, but with no intention of, stealing thunder from these new "little" guys, I'd also stopped by the Station Taproom in Downingtown a few days ago when they were featuring the Sour Sisters from Goose Island. When we talked of going, I said honestly that I was not sure which I was looking more forward to, a long overdue dinner at the well-regarded Station Taproom, or the sour/barrel-aged beers from Goose Island. Neither disappointed, with the order of preference: Gillian; Juliet; Lolita; and Halia. Though, Halia, even its fourth position on my preference list is a darn good beer. 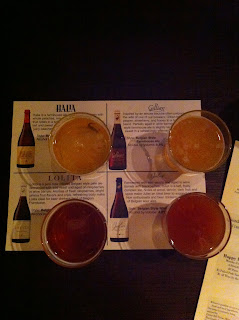