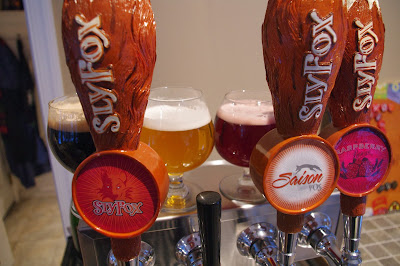 Around the time of my running of the NYC Marathon, I had a fortuitous note from the good people at Sly Fox that a bit of smooth and delectable Oatmeal Stout would be available at the brewery in Pottstown. They know of The Brew Lounge's (and the Missus') fondness for the occasionally-brewed Oatmeal Stout. Very little of it makes it outside of the brewery and is typically on tap at their two locations around this time every year, depending upon their brewing capacity and schedule.

While talking sixtels, I casually asked without any expectation if/when Black Raspberry Reserve might find its way into kegs for the retail market. (The old adage that goes something like "you'll never know if you don't ask" applies in this case, for sure.) This, also a wonderful beer and one of The Brew Lounge's favorites from this 18-year-old Pennsylvania award-winning brewery, likewise rarely makes it out into the broader marketplace, save for 750ml caged/corked bottles.

A mighty fine beer any time of day, it can also serve as a great brunch beer with its dominant fruit flavor and smooth texture. If you think breakfast drink options consist of stouts, mimosas, or bloody marys, this is one you should definitely consider.

Lucky, lucky. They'd just brewed a small batch and it would be available within a week or so. I couldn't say "yes, please" quickly enough.

So, what's left? Well, in the two plus years since Exton Beverage installed The Brew Lounge's kegerator, if there was a beer that has earned anything close to permanent tap marker status, there's no doubt it would be the Saison Vos from Sly Fox. I've long considered this to be (and still hold it to be) one of the finest of its style this side of the ocean.

"I might as well pick up one of these too, right? We'll call it a tap takeover."

And that's the story of how The Brew Lounge stumbled into its first ever Tap Takeover. This will be fun. For reservations at The Brew Lounge, drop a note to me and we'd be happy for you to stop in for a taste :-D

Otherwise, stop by the Pottstown or Phoenixville locations for the year-round Saison Vos or Pottstown (only) for the Oatmeal Stout — while supplies last, that is. Unfortunately (or fortunately, depending upon your preference), the Black Raspberry Reserve is currently available only for retail in 750ml bottles.