ShawneeCraft and Brigantessa hit all the right notes in South Philly

In keeping with my new year don't-call-it-a-resolution, I gladly took Brigantessa's invitation to join them as a guest for dinner at their southern Italian-themed restaurant in South Philly last Thursday, January 21. Pardon the delay here with my follow-up thoughts and review as The Brew Lounge was, maybe not completely shut down, but at least slowed down since the Great Blizzard of January 2016. Brew Lounge HQ received a reportedly official 30.1" of snow. Measured in stacked beer cans, it was approximately 4.5-5.0 cans of beer in my driveway. (scroll for pictures below)

Back to the topic of last Thursday. As I'd mentioned last week, these early months of 2016 will see me returning to a much more normal mode of engaging live and in person at beer events and related "stuff" after a frantic last couple of years related to the book.

Brigantessa is owner/chef Joe Cicala's second place behind his celebrated Le Virtù, also nearby in South Philly. With this invitation came my expectation that I'd find a relatively new restaurant (to me, at least, given that it's been open since the fall of 2014 and is widely talked about with high praise) and a brewery that I certainly don't see/taste enough of.

For the dinner, bar manager Elliotte Samartino teamed up with Cosmo Iacavazzi from ShawneeCraft Brewing Company to put on dinner with what appeared on paper to be a well-conceived set of pairings. Brigantessa seems to roughly translate to "female bandit" and I'm not sure which stole the show more at this dinner.

The dishes of food showcased a wide variety of kitchen talent at Brigantessa — from pasta to pizza and savory meat to sweet dessert. If this was to be a representation of what I can expect from a return visit, the beer dinner did a very good job in nudging me in that direction. In addition to a solid kitchen, the beer side of the bar program is managed well with a lineup of sixteen draft lines pouring imported Italian beers along local/regional favorites.

ShawneeCraft Brewing Company is located on the same property as the Shawnee Inn and The Gem & The Keystone and co-owned by the same family. You can imagine what type of fantastic getaway weekend that this makes for.

As for the ShawneeCraft beers that Iacavazzi was representing from the Pocono-region based brewery, from my book research (the brewery is in the book, if it wasn't already assumed), I'd been quite familiar with the Apiarius (which, in the book, I described as a "very food-friendly beer, particularly with lighter fare" and was sourced with honey from hives on the brewery's property) and the Double Pale (named a "Beer Lover's Pick" and "...delightful floral aromas with easy-going bitter flavors...pair with a bowl of spicy chili or gazpacho..."). But I'd not run across the Farmhouse, the Sub Rosa, nor the Imperial Cacoa Porter.

After the Farmhouse light awakening of our palates, the Apiarius was being served from the can (love seeing this!) and was a perfect accompaniment for the light croquette antipasto introduction to the dinner. The Double Pale, a signature beer from ShawneeCraft that I mentioned above, provided an excellent hop-forward pairing with the pizza, bursting with incredible flavors of its own from the artichokes, olives, and chilies.

The Sub Rosa, a Quad, was good, but the fantastic handkerchief pasta (the Fazzoletti) and lamb ragu could have been paired with muddy water and I wouldn't have noticed. An excellent dish of food that I don't see on their website's menu. Hopefully, trusting, that this comes up from time to time on their specials menu.

For all the goodness that proceeded them, the most excellently executed pairings of the night, in my opinion, were saved for the last two. Pork Shank and Altbier? Words escape me; an absolute stunningly seamless integration of flavors from plate to glass and back to plate again. Off-the-bone meaty goodness and a light tinge of smoke from the beer went together like Jack and Diane. Where that reference came from, I have no idea.

The dessert was a fun tease from the printed menu — what? Arancini for dessert? — to the presentation. Cutting into these balls of tender rice revealed sticky sweetness in just the right portion size along with the perfect wingman — the Imperial Cacoa Porter — that capped off a very well conceived and executed dinner.

An overuse of superlatives is not typically my thing. But when a dinner like this worked out in every way hoped for, well, it seems appropriate. Can't wait for our next, non-event, dinner at Brigantessa.

Following here is the menu from the ShawneeCraft Beer Dinner at Brigantessa on January 21, 2016. 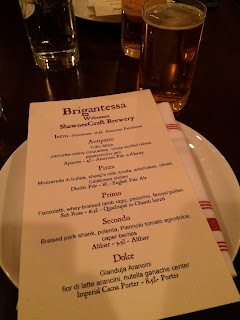 (Brigantessa's well-conceived menu to pair with ShawneeCraft's beers on January 21, 2016) 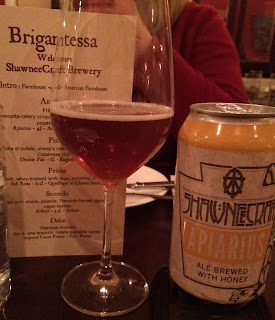 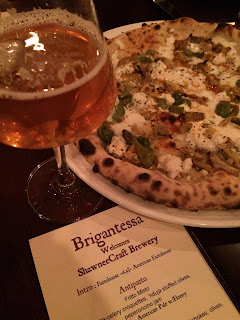 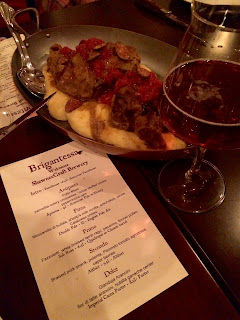 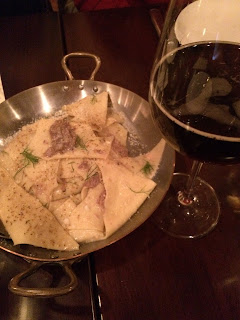 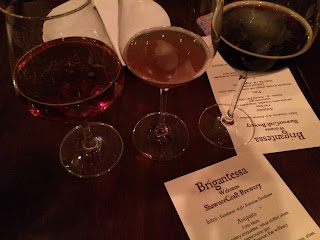 (A trio of ShawneeCraft's finest from Shawnee on Delaware, Pa.) 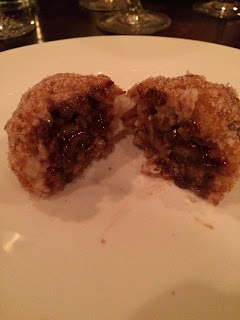 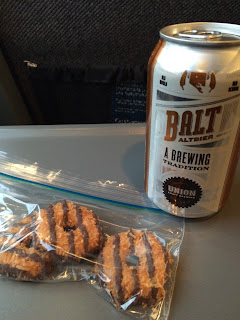 (This is what pre-gaming a beer dinner on Amtrak looks like with a mighty fine altbier and girl scout cookies.) 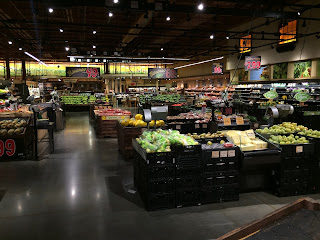 (This is what pre-blizzard shopping at 11:30 p.m. after a beer dinner looks like.) 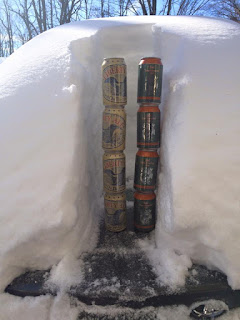 (And, finally, this is what roughly 30" of snow looks like, measured in beers.)