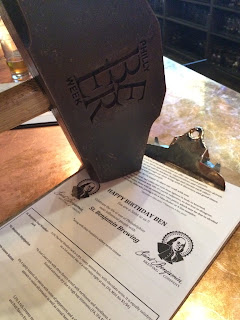 On one hand, I wouldn't call it a resolution. However, I did come down the home stretch of 2015 seeing a planned slowdown in my book events as the perfect opportunity to getting back out there on the brewery, bar, and event beat. It's something I'd built my reputation on - that is, getting to know the breweries, their beers, the bars they're served in, the events they're poured at, and the people behind them all and serving up to you the sights, sounds, tastes, and information to help you with your own beer journeys.

The book gave me a perfect platform to highlight some of the best around PA, NJ, MD, and DE. But, the content hosted here at The Brew Lounge certainly took a hit in favor of the book project. With that slowly moving from the forefront, I'm getting back to the old business as usual and doing it with two things in mind. First up, I'm getting back out there to bring you the best of the beer world as I experience it first hand. Second, work on a second edition of the book could begin as early as next year so staying on top of the new breweries and bars/events that their beers are served at will be of extreme importance so I can hit the ground running if and when that time comes.

So when the e-mail came reminding me of City Tap House's event this past Monday in Philadelphia just off Logan Circle to commemorate Ben Franklin's birthday with a special holiday lunch and beers from, naturally, St. Benjamin Brewing Company, I immediately bumped it up my priority list of things to do - after getting my painting chores done first.

(I should also add - and, going forward, intend to make an overt practice of disclosing such matters - that I paid for my own parking, my beers, and my food. These days, with seemingly more chatter than ever about selling out, vested interests, and other grey area topics, I plan to make sure that there's no question as to my independent status. When a tab is paid for by a brewer, bar owner, a PR firm, or otherwise, I'll be sure to make note of it so that you can calculate your own measure of my bias. Not that I haven't made this effort in the past, but I plan to be much more disciplined about making the point.)

Why would I "immediately" bump the event up? It wasn't that I haven't been to City Tap House before. Well, back to my opening comments. Especially during the last year of marketing and selling my book, I've really let new-ish things slide. That is, keeping up on new brewery openings, brewery expansions, and sharing information in this ever-confusing and changing beer scene.

In this case, the subject is St. Benjamin. They've been creeping up into a larger presence on the city's brewing scene since opening back in 2014. They were in the appendix of my book as "Open Now" with a short description that read: "A 3-barrel brewery bringing uniquely flavored, quirky, and well-crafted beers to the beer drinkers of Philadelphia. Planning to add a pub room in 2015." But with a small portfolio of beers and slow ramp-up into the market, I couldn't get them into a space within the body of the book. With the exception of occasionally running into their beers at Standard Tap or Johnny Brenda's, that was the last I really had on St. Benjamin.

Until now. And boy have I missed out on the progress of the last year. This week's event was primarily to unveil the brewery's new Franklin's Abbey line of Belgian-themed beers. For me, though, it was much more. Call me a slacker - of course I am, I already admitted as much - but I learned that the brewery has expanded from the original 3-barrel brewhouse setup to a 10 hectoliter (roughly 8.5 barrels, which I love the introduction of the math, thanks). Speaking of brewing, also heard first-hand that former consultant, Gordon Grubb, has moved back full-time to Nodding Head which, yes wait for it, is apparently very close to getting that first brew in the tanks in South Philly.

And that the tasting room/pub is on track to be open to the public in the spring, most hopefully in time for the Craft Brewers Conference (CBC) which descends an estimated 10,000+ brewing industry professionals to the city for its annual convention. 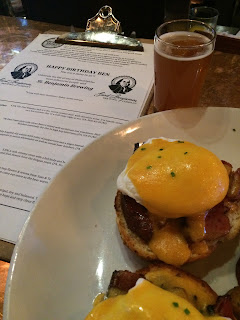 Owner/brewer, Tim Patton, and sales/events manager Jackie Cusack were on hand Monday at City Tap House along with six of their beers on tap. Hopligation (7% ABV) and Franklin's Abbey Triple stood out to me, with Hopligation earning its way into a full pour for me after sampling the rest of the lineup. The Franklin's Abbey Stout and Foul Weather Jack English Mild (4.5% ABV) also did an excellent job representing their respective styles.

The last on that list got me into a conversation with brewer/owner Tim Patton about how we can go about providing all the support possible to help keep classic styles alive, such as his English Mild that I truly believe belongs on every beer lover's list of beers to drink in Philly. Oh, and I might make mention as well of the Pork Belly Benedict that accompanied these beers, particularly the stout, quite nicely. BEN-edict, get it? As you were...
Written by Bryan Kolesar at Wednesday, January 20, 2016