The much-anticipated Root Down is now open in Phoenixville and things are looking (and tasting) so good that they landed two beers on last week's best-of list. Here's an index of all beers that I've covered in the past on these weekly hit lists. 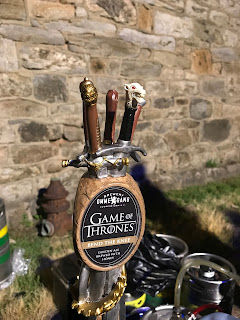 (While I know absolutely nothing about HBO series, Game Of Thrones, I know this beer well enough now to know it deserves a place on this list.)
~ Game of Thrones Bend The Knee Golden Ale (9%), by Brewery Ommegang (Cooperstown, NY)
I've no shame that I don't know one single thing about Game of Thrones (no hater, though). What I do know is that from my recall, this may be the best (or at least my personal favorite) in the series of GoT-themed beers put out by Brewery Ommegang since Take The Black Stout. This one is a fine sipper that drinks like a Belgian Tripel (sweet and a touch of hop bitterness) and, at 9%, is probably better suited for easy-chair drinking rather than walking around Eastern State Penitentiary. That's where the picture above was taken during the wildly-popular, and smartly conceived and located, event in Philadelphia to mark the release of the new beer. The prison is a magnificent backdrop for many such events, and it played particularly well here for the brewery and the show. 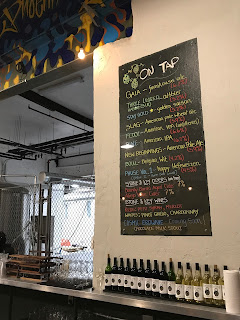 (You'll be hard-pressed to find a bad beer on this list at Root Down; 3LR rises to the top.)
~ 3LR-Three-legged Rabbit Altbier (5.2%), by Root Down Brewing Company (Phoenixville, Pa.)
This is an unapologetically beer low on hops. So much so that they named it Three-legged Rabbit. Why, you ask? Well, what does a three-legged rabbit not do? Hop, duh. This is a beautiful showcase of a wonderful style indigenous to Düsseldorf, Germany and how a malt-forward beer should drink and one that I hope to see on Root Down's menu more often than not — and, hopefully, on an increasing number of other brewery lists as well. 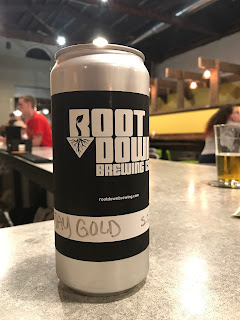 (Stay Gold tastes just as good a couple days later from the crowler as it does on tap at the source.)
~ Stay Gold Saison (5.2%), by Root Down Brewing Company (Phoenixville, Pa.)
My second visit to Root Down was after a three-hour lawn mowing session and I made a nice little session out of this refreshing Saison at the brewery. Crisp, dry, spicy and just a tick over 5% makes this another beer that I hope to see more often than not at this new Phoenixville brewery and its ultra-comfortable taproom. 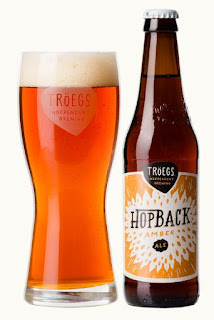 (HopBack a rock star in the year-round lineup at Tröegs.)
~ HopBack Amber Ale (6%), by Tröegs Independent Brewing (Hershey, Pa.)
I went to the Pour House in Exton last week when the Tröegs team was debuting its Nimble Giant DIPA. Know where I got detoured along the way? It was the first Tröegs beer on the draft list and one that I'm fearing is losing space on the shelf with absolutely no just cause. Such a perfect and tasty balance of malt (yeah, some Crystal, what's wrong with that?) and enough Cascade, Nugget, Willamette hops to get your attention. Don't take this beer for granted.

Email ThisBlogThis!Share to TwitterShare to FacebookShare to Pinterest
Categories: Best Beers, Root Down