In my continuing series of the best beers I've had in the prior week, you may not be surprised to learn that in the past week, they were all encountered during Philly Beer Week. A couple of them, you may never (or, at least, not soon) see again. 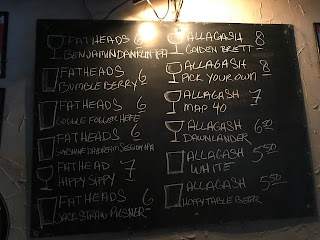 (Pick Your Own was enjoyed at an excellent event with Allagash and Fat Head's at the P.O.P.E. It's very dark inside. Given that, I'm happy enough with this picture, much happier with the beer itself.)
~ Pick Your Own (6.4%), by Allagash Brewing Company (Portland, Maine)
Fruit rules this sour ale. Raspberries, Cherries, Strawberries, and Blueberries. It was in an "oak foudre with Lactobacillus and Pediococcus for two years". That worked out very well. A beautiful color and so much flavor. Exactly what you'd expect. Hoping to hit up at least one more event with Allagash during remainder of PBW to have another encounter or two with this beer. 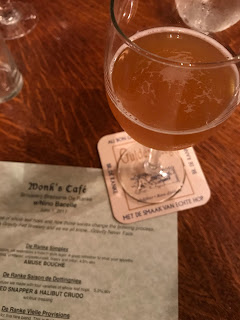 (This beer was only recently completed and shipped over to Philly just in time for Philly Beer Week and, here, at a Monk's Cafe lunch with the owner/brewer.)
~ Simplex (4.5%), by Brouwerij De Ranke (Dottignies, Belgium)
In essence, this beer gets its name from being a "simpler" XX Bitter. If you're familiar with that 20+ year old standard-bearing beer from De Ranke, I'm betting you'll love this Simplex as well. My hunch is that it's the Hallertau Mittelfrüh and the low alcohol that has me hooked. So far, I'm three glasses into this beer and hoping for many more. 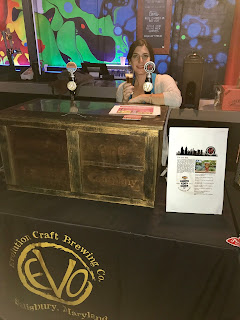 (Had this beer at both Opening Tap and at Varga during the last week. Yet still don't actually have a picture of the beer. Well, though, this one is of Kristen Madgitz from the brewery's sales team about to hand one to me. So that counts.)
~ Lot 215 IPA, by Evolution Craft Brewing Company (Salisbury, Md.)
According to the description, this begins with the base Lot 3 IPA and then incorporates smoked cedar and spruce tips, smoked dried cherries, and a dry hopping menu of Chinook, Citra, and Columbus. And that's exactly what you get. Very interesting. 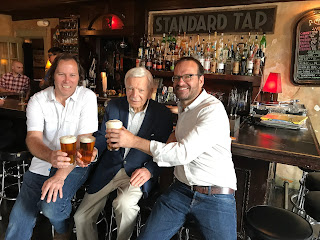 (This sturdy, bready, yet easy-going delicious lager was presented at one of the highlight events of PBW thus far. From left, Brian O'Reilly, Bill Moeller, William Reed.)
~ Northern Liberties Lager (5.8%), by Sly Fox Brewing Company (Pottstown, Pa.)
Brian O'Reilly (Brewmaster, Sly Fox) has collaborated the last ten years with William Reed (proprietor, the hyper-local Standard Tap and Johnny Brenda's) and this year they took it to another level. This recipe was sourced from Bill Moeller's (Schmidt's, Ortlieb's, et al) father's beer recipe journal, circa 1910. After making adjustments, based upon modern day measurements (alpha acid, etc.), they crafted the most solid lager I've enjoyed thus far during PBW '17. During the release brunch event at Standard Tap, the 91-year-old Moeller was on hand and captivated the audience with decades of Philadelphia neighborhood and brewing stories. Get this one while you can at the brewery, or at either Standard Tap or Johnny Brenda's.