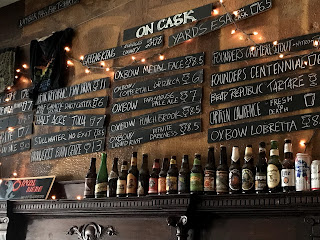 Feel free to read on for my half-baked attempt at wrapping up Philly Beer Week 2018 more than a month after it began. Or just click the picture above for a pictorial walk down memory lane as seen through my personalized schedule of attended events.

Still here? Ok, let's see how I do with this. What can I tell you? Did I give it the ol' college try? Depends what you call trying. I was absolutely prepared for PBW '18.

I was at inbox-zero. All computer and apps and phones were updated and backed up. All summertime power equipment fired up and working perfectly. Hot tub water chemistry spot on. Lawn and garden producing nicely. Office tidied up; printer toner replaced; papers filed; old documents shredded; (most) everything in its place. Contractor work on front of house/sidewalk finished. Gutters cleared; house and walkway powerwashing complete. Beer inventory squared away. Beer writing duties up-to-date and next deadline in mid-June after PBW.

I shared a bunch of stuff with you here in these pages leading up to June 1. I social media'ed the crap out of the events I attended. (You do know where to find me out there, right? On Facebook and on Twitter.)

24 events to be exact if you're counting or if you care. Pretty much like what I do every year to get a feel for the energy and the pulse of PBW. One year, I hit something like 35-ish events. Granted, it can be just for a beer, to get a headcount, and get a sense for overall effort that an establishment put into conducting a PBW "event".

So, yeah, I put in the effort as I always do out there on the street. But, here on the ol' Brew Lounge blog? Worse than last year, I not only did not post up a timely recap, but did no daily wrap-ups either.

That's what this post will endeavor to do. I don't really have many words to share at this point. Don't know that it really matters. Lots of "events" (see how I keep putting "events" in quotes?). Lots of beers. People? Yeah, there were people, mostly at the uber-dorky (I mean geeky, I mean geeky, in its most endearing sense, of course) beer releases/tap takeovers. To me, there were not enough creative events promoting at the median between mad-sick-yo-bro beers to the run-of-the-mill brewery feature. We do this year-round in the Philly region. We can do even better for ten days in June.

But where did I feel the "best energy"? Opening Tap for starters. It had something this year that I can't exactly articulate. But, it was there. Like I haven't felt for at least a few years. If I have a say, I'd like to see much better emphasis on local/regional breweries. For Opening Tap, this is our one chance to showcase the best of the region. Allow no other events to be posted during the time of Opening Tap. Make it the grandest showcase that serves as the appropriate kickoff for Philly Beer Week. The rest of the week can feel free to mix it up as much as consumers want with out-of-market features, but at least for one night under one roof, the locals should dominate.

And Monk's Cafe on Tuesday. Dogfish Head sent not just owner Sam Calagione but also his reunited former head brewer, Bryan Selders, area sales manager Wendy Domurat and brand development manager Jennie Hatton-Baver. It was a lunch befitting Philly Beer Week. There was talk of the past and talk of the present. It was a nice mix of industry folk and the consumer off the street willing to take an afternoon off work, plunk down upwards of $100, after tip. For the record, it was out of my own pocket as well, before anyone gets any ideas of bias. Then, the lunchtime soiree made its way down Sansom to Fergie's where Calagione and Selders recreated the days of their brewery rap group - The Pain Relievaz. Lunch, learning, eating, drinking, and capped off with some good ol' fashioned laughs. A very well-rounded day that lived up to the lunch's name - Olde School.

On Thursday, there was an educational type of event. I can not be quite certain that any non-industry folk showed up for it, even though it was absolutely open to the public. It was nicely attended for a Thursday afternoon by around 25 industry people listening to a panel discussion about quality beer, quality processes, and quality presentation for great beer. It was hosted at Urban Village which coincidentally was celebrating its first anniversary of getting its root down on Philly's brewing scene in the Northern Liberties neighborhood. Feels like there have been more panels, stuff that gets closer to educational, special guests, and events that have just that little something extra than just shoveling in a tap takeover's worth of beer. Eh, maybe the jury is in and beer drinkers aren't looking for that? Or did I miss a part of this year's schedule?

Everything else, to me, felt like just drinking (mostly) great beer. Something that we've done around these parts for many more years than many places in this country and something that has become even easier to do in just about every corner of this country in recent years from Alabama to Nebraska, not to mention Florida and Texas, also once considered vast beer wastelands, but no more. Philly Beer Week is still a great excuse to showcase what we make and what we have the pleasure of being sent to our blessed region and should have absolutely no reason to continue strong into the future. But, oh, that one other thing that I kept hearing (yet again)...

March. Think about it. What I heard from more than ever in at least the last five years was — March.

Link to Google Photos for a gallery of PBW '18 pictures.