Can Yards can beer? Yes, they can and they are (let me know if you need more can jokes) 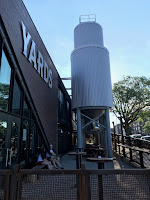 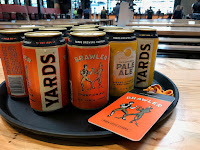 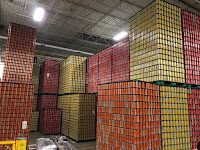 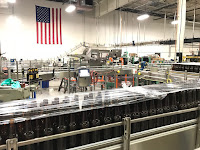 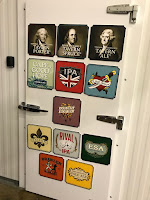 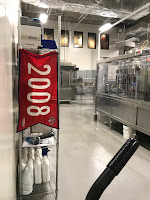 Yards invited me and some others in various forms of media to check out the new canning line, have a few beers, and get an updated tour of the brewery at the new location of 5th & Spring Garden. I hadn't been on site since Yards was a part of my never-ending post-Super Bowl parade party back in February. So I figured it'd be a timely opportunity to see how things have developed since then.

I think it's pretty clear that the Yards crew is settling quite nicely in to their new digs. Early visits of mine seemed to show a staff humming along as if they'd been working in this new space for years. In addition to the well-tuned beers that the brewery has trained its fans to expect, the kitchen was turning out some creative food from the get-go, taking the brewpub experience up a notch.

What's changed since then? Some of the empty space that I recall from early visits has been filled with more stainless steel and, most recently, a canning line. They've accomplished quite a bit in the last six months since making the official transition from the scenic home along the Delaware River up on to the western edge of the Northern Liberties neighborhood. The new location certainly gives it more of an integrated city feel and the hustle in the 70,000 square foot brewery and taproom shows that Yards is reaching its steady state and, likely, ready for some new growth. That's just me attempting to read tea leaves (or hop leaves, if you prefer); there've not been any new markets opened, nor has there been public talk of such.

They're currently running at a pace of around 42,000 bbls/year with the potential to ultimately go to 100,000, though the talk is not currently that aggressive (or reckless?) But, with more equipment (there's room) and more brewing hours (they currently have a 5 day/week schedule), there is support for potential growth. And some of that is being seen in the new cans coming off the line. They're doing Philly Pale, IPA, and Brawler first, three of the most popular brands and, not to mention, smart choices for this hot summer. Pounders too! The bold, clean, and distinctive design works well too for the ever more crowded retail shelves.

By the way, the tour? Yeah, you should do that too. You'll get plenty of information, plenty of laughs (expect a good dose of irreverent humor woven in with the brewing bits), and a parting gift.

Here's a bit more from the brewery's press release.

This Summer, Yards Brewing Company invites Philly area locals, as well as visitors to this great city, to come have a beer in their distinct outdoor seating area located directly underneath towering steel brewing tanks along Spring Garden Street in the city’s bustling Northern Liberties neighborhood. The new Yards taproom and brewery at 5th and Spring Garden Streets offers patrons 20 taps of fresh, quality Yards ales and a full dining menu crafted by Chef Jim Burke. Curious folks can opt for up-close brewery tours to see how Yards beers are brewed, bottled, canned and kegged for the hard-working people of Philadelphia and beyond.

Founder, President and Brewmaster Tom Kehoe and the Yards crew have been brewing in the City of Brotherly Love since 1994. For the first time in Yards’ 24-year history, the regional craft producer has started canning their flagship beers: Philadelphia Pale Ale, Brawler, and Signature IPA. These go-to brews are available in traditional 12-oz. and 16-oz. pounder cans that can be found in the Yards Taproom and wherever Yards beers are sold – just in time for summer barbecues, ball games and weekends down the shore.

For those who don’t want to go too far to get away this summer, Yards Brewing Company’s front yard is the perfect spot to throw back a can or two in the shade of the tanks. Big round tables encourage friends to get together under the tanks and watch the day go by while enjoying everything Yards has to offer, like their behind-the-scenes brewery tours offered daily.

Brewery tours provide thirsty guests a behind-the-scenes look at how Philly’s Beer is made. Tour goers will learn about the brewing process and hear the Story of Yards, with plenty of comedy, beer samples, and giveaways throughout. Tours last approximately 45 minutes and cost just $5. Tours must be booked in advance through an online reservation system at yardsbrewing.com/tours. Tours run Monday through Friday at 1 p.m. and 4 p.m. and Saturday and Sunday, with 12 tours per day, from 11:30 a.m. until 5 p.m.

About Yards Brewing Company…Yards has proudly brewed Philadelphia’s beer since 1994. The regional craft producer has grown from a garage-sized operation in the Manayunk section of Philly to a 38,000-square-foot facility along the city’s Delaware River waterfront to a 70,000-square foot facility in the thriving Northern Liberties neighborhood. Philadelphia Pale Ale and Brawler, both nationally-recognized ales, lead a balanced portfolio of quality, handcrafted beers, including eight year-round offerings and several seasonal and limited releases. Founder Tom Kehoe and the Yards crew share a commitment to supporting the good people and organizations making their backyard a better place to live and work. It’s all about working hard, having fun and giving back. Brew Unto Others.