Don't let anyone tell you otherwise; it ain't easy keeping up with the PA brewing scene. Even as the columnist covering it for Ale Street News. The country has somewhere in the vicinity of 7,000 brewing establishments. Pennsylvania? Something north of 300.

When asked to speak about the book I wrote back in 2014 about the beer scene of PA, NJ, MD, and DE, I throw out some statistics right up front. I visited 369 establishments (breweries, bars, and homebrew shops) connected by 9,444 miles of drive-time.

So why do I so rarely anymore go out for a day long excursion (or weekend long) to discover all that's new out there in the great wide beer world? Dunno, good question.

But that's exactly what I did do last weekend. 190 miles, 6 breweries, 12 hours. Here's a quick rundown. 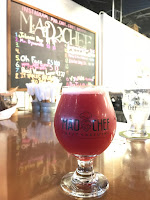 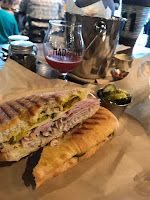 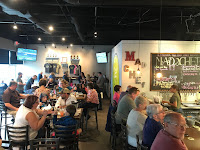 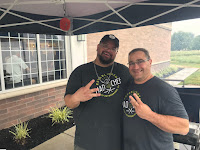 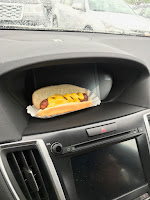 Mad Chef Craft Brewing, in East Petersburg, PA
It was their 3rd anniversary shindig and that had no bearing on my visit. At least not initially. When I was spec-ing out the trip and potential stops, these guys were high up on my list. Always are when in the Lancaster area. I refer peeople here who are looking for great food, even if not great beer too. Their beer game took a step up in the world when they were recognized with a silver medal at the World Beer Cup back in May for the Mr. Dynamite in the American Brown category. My first chance to have it since then and was not disappointed at all, i.e. not overly "Americanized". The Anniversaberry Sour was a big fruit-forward, easy-drinking raspberry sour. Can't go wrong either with the Dry Irish Stout, All Up In Your Hibiscus, or Vienna Lager. Or the Cuban sandwich. Or the free hot dogs and hamburgers. Or the frites and dipping aiolis. Ah, the frites. In the upper tier of frites, seriously. These guys, their staff, their place, all first rate. 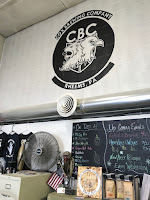 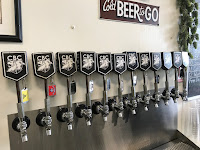 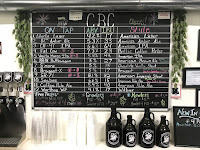 Cox Brewing Company, in Elizabethtown, PA
Over the river and through the woods. Or maybe for these guys it's more like over the hill, through the train track tunnel, around the bend, into the crushed stone parking lot, and next to the deer processing plant. It's not that Google Maps won't take you right to the doorstep. It's just the first reaction is something like: Is this really where it is? Then you saddle up to the tasting room bar (or stand, if it's capacity crowd as it was on this particular rainy Saturday afternoon) and you get pulled right into the friendly crowd of both staff and customers. The full operation (i.e. small) is on display in this bare bones setup. But the lineup of beers (a dozen draft lines) is anything but bare bones. This veteran-operated brewery (where each tap handle, as well as growler neck, is adorned with a dog tag) has a nice diversity of styles on tap and my short visit revealed decent beers in everything from the core brands, for example the Liberty Lager and CH-47 IPA, to the more flavor-adventurous such as Coffee Pale Ale and SR-71 Imperial Stout. Unfortunately, a schedule had to be kept, so I grabbed some complimentary peanuts and pretzels off the bar and headed up into E-town. 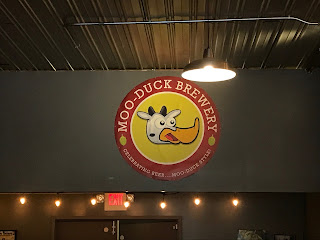 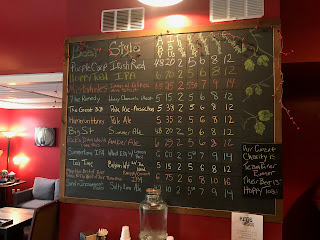 Moo-Duck Brewing Company, in Elizabethtown, PA
There are three brewing establishments in E-town (short for Elizabethtown). I've been to them all now that I visited Cox (the other being Funk, an outpost for the Emmaus-based brewery). Who knows, there could be three more by now, but I think I'm safe at least for the time being. Been to Moo-Duck before which is conveniently just mere steps from the Elizabethtown Amtrak train station. They say they do a pretty nice business off the comings and goings of local commuters. Another 12 beers available here, on draft and in crowlers to go, with the average ABV, if you exclude the Imperial Coffee Milk Stout, at a very nice 5.25%. Half an hour up the road in to Harrisburg to the next stop. 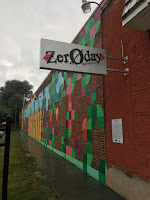 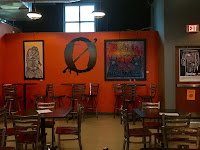 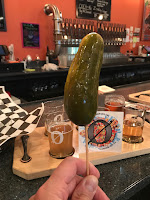 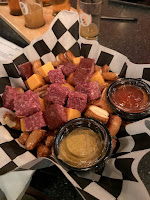 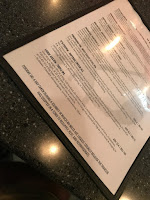 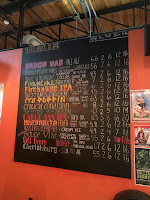 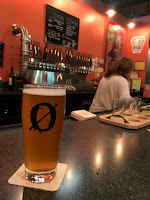 Zeroday Brewing Company, in Harrisburg, PA
I've met Brandalynn Armstrong, owner of Zeroday, several times over the last couple years and have given her my tired ol' "gonna get out to see you sometime soon in Harrisburg". Well, that day finally came. Good thing, too, because my free time, particularly free weekends, is looking pretty desperate until much later in the fall. Wanted to do more in the state capital, but too much driving and too many other stops said otherwise. But, glad to finally made it to Zeroday. Arrived in time to see the Saturday afternoon crowd thin out and then pick back up for the evening. Armstrong says there's a new, more comprehensive food menu coming, but we were more than satisfied with the heaping bowl of Lebanon Bologna and Cheddar cheese cubes atop a bed of pretzel nuggets. And a giant pickle on a stick. Most certainly the first time that string of words has been found here on The Brew Lounge. The beers catching my attention from amongst 15 on the list were the Mango Hab (great balance of heat; noticeable but not palate-blasting), Firehouse IPA (yay for West Coast IPAs; whoever thought we'd have to cheer to keep them around?!), and Margarita Fever (what can I say, this salty sour was a great way to break up a day of malt and hops). If I wasn't driving, the Triple IPA (12.4%) had my name on it. The rotating artwork series on the brewery walls is pretty amazing as is their space in the nearby Broad Street Market. Well, at least I hear it is. Last time I was at the market, there was no beer stand. Now, Zeroday is there selling beers to go with the vendors' meats, cheeses, and produce. Need to get there before closing next time. Oh, did I forget to mention the wall-mounted Randall? Nice, unique touch. 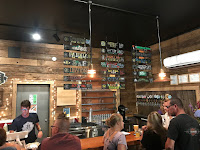 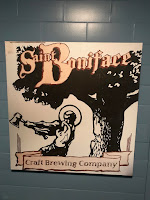 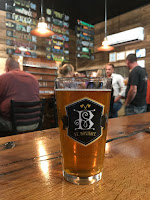 St. Boniface Brewing Company, in Ephrata, PA
I haven't been to St. Boniface in probably close to three years. My how they've dressed the place up. Old days, it was a tasting room with, iirc, a stainless steel table, some taps, and a ragtag collection of tables and chairs. Maybe even a jockey box? I might be a bit foggy on that last point. Doesn't matter; the past is the past. And here in the future (er, the present), the brewery is open until 10:30 p.m. on Fridays and Saturdays and serve up pizzas, calzones, sandwiches, and desserts from a small corner kitchen behind the bar. And judging from this mid-evening visit, the locals love it. And how couldn't they? 16 of their own drafts plus 2 guests. I could've done more to wander out of my comfort zone, but when fresh Paideia Pale Ale presents itself (as it has in my kegerator at home), it's a pretty darn good place to start. Then, the Best of Both Brews Coffee IPA was a solid next step. No interest in food at this point, so will have to save judgement on the pizza for some other time. But, all-in-all, happy to finally get here and see the nice work they've done with the design and decor of the tasting room. 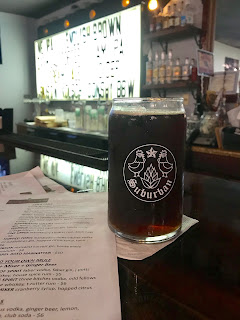 Suburban Brewing Company, in Honeybrook, PA
St. Boniface is on Route 322. Suburban is also on Route 322, oh just about 20 miles away to the southeast. Plus, it was "on the way home" so, duh, I suppose? No, really, it was. Another brewery where I've told the owners: Yup, I'll be stopping by any day now. Uh, how about a Saturday night around 10 p.m.? On one hand, not the most ideal time for a first visit. On another hand, the perfect time. Get a chance to see the fun 'n' games of a Saturday night crowd. These guys definitely deserve another look from me. Maybe during the day; maybe for longer than an hour (or two beers, depending upon how time is measured). But they had me hooked on the English Brown Ale. Like I said earlier, sticking more true to its style roots and not too "Americanized". These guys, if you aren't aware, are the brewing side of Suburban Restaurant and Beer Garden in the Eagleview Town Center just of the PA Turnpike in Exton (more like Lionville or Eagle, but let's not quibble).

I've got some more day/weekend road trips in mind to catch up more around eastern Pennsylvania. One idea is the Lehigh Valley/Poconos. You know, from Emmaus to Allentown to Bethlehem to Hellertown and then up into the Poconos.

The other goes back to my Harrisburg comment, thinking about checking out some of what's happening in Harrisburg, Camp Hill, and Carlisle. Plus a York to Hanover (or vice versa) crawl. Like, did you know that Hanover now has four, count 'em 4, brewing establishments?