Stone Brewing taking it one continent at a time 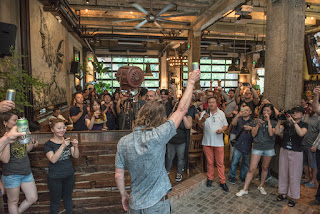 (Shanghai VIP Grand Opening - photo courtesy of Stone Brewing)
It's hard to keep up with these guys. I've been to Stone Brewing HQ in Escondido. Working on getting to Berlin. Napa? I should be able to in a few weeks. But, Shanghai's gonna take another level of effort. Fun to watch these guys grow and introduce their beer to the world. Here's the latest press release.

“The promise of expansion seems to be an all-too-familiar excuse for selling out in craft beer, but we prefer to be the embodiment of the alternative,” explained Stone Brewing CEO Dominic Engels. “Our independence is what guarantees authentic experiences for our fans. It allows us to be nimble, creative and bold. By pioneering new geographies we’re leading the charge for independent craft beer and the sheer act of doing so is fueling our creativity and passion. We’re thoughtful in our growth, we’re focused in our execution, and you definitely haven’t seen the last of us.”

To deliver a world-class beer experience Stone Brewing painstakingly designed the first uninterrupted cold chain delivery of US craft beer to China last year, and continues its tally of ‘firsts’ with the installation of a ‘flux capacitor tap system’ at the newly opened tap room. A first in Asia, this special manifold system is a principal example of elevating the craft beer experience, and allows for custom calibration of carbon dioxide and nitrogen mixes for each and every of the restaurant’s 30 beers on tap.

Stone’s meticulous approach to each beer’s delivery is indisputably matched by the environment surrounding it. Stone’s 3,200 square-foot bar and restaurant offers seating for 90 indoors and 28 in the additional 1,000 square-foot gardens. Floor to ceiling custom roll-up doors open the tap room to the outdoors on two sides. The interior incorporates reclaimed wood, concrete, steel and vintage furnishing, a main bar and an oversized fireplace lounge. The Stone Brewing World Bistro & Gardens food philosophy translates to Stone’s first Asia project, incorporating artisanal products with a focus on environmental responsibility and high-quality ingredients.

“Stone Brewing Tap Room – Shanghai is everything we set out to achieve, as it has the craft beer heart and soul we intended,” expressed Stone Brewing Executive Chairman & co-founder Greg Koch. “We’ve curated a selection of craft beers rivaled by none and designed an impeccable experience for enjoying them. This isn’t just about Stone beers either. It’s about global craft beer. These are destinations for those interested in craft to explore new things and experience the world’s very best just as they were intended to be enjoyed. We hope to inspire a more profound understanding of craft beer, raise the bar in appreciation for America’s craft brewers and, at the very least, brings our fans together over a pint of the good stuff.”

Stone Brewing – Napa
Last month Stone Brewing – Napa brought its renovated 1877 downtown Napa building to life in the heart of California’s wine country. The 9,500 square-foot restaurant and 10-barrel brewery offers locally-brewed beers, a dining experience, growler fills and merchandise. The Napa brewing program is led by Steve Gonzalez, Stone’s six-year veteran Small Batch Senior Manager of Brewing & Innovation. Fortuitously, Steve also had a former career as a winemaker, making him uniquely qualified to bring together the two industries in distinct and special ways. This will manifest itself in brewing techniques that include wine-barrel aging, beer recipes that include wine grapes, as well as interesting botanicals from the region’s diverse ecology.

With the addition of these three new locations, Stone’s unique venues now total 11 in number. Like-minded in approach, each exists to elevate the craft beer experience while creating an environment that fosters togetherness and affinity for the art of craft. The spirit and philosophy of Stone guides every project, but each is exclusive to its own surroundings, building’s character and local community.

And speaking of that spirit and philosophy of Stone, did we mention we did it all without the help of Big Beer? Founders Steve Wagner and Greg Koch retain full Board control of the company to this day, ensuring that the company stays true to its ethos and ideals of the past 22 years!