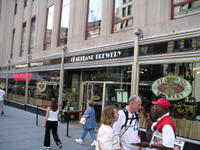 So we left Stout NYC and moved onward to Heartland Brewery. From my experience, this was going to be the least anticipated stop on the tour. However, I felt a certain obligation (why?) to stop by and see if things and become any more interesting since I'd last been there. Plus, a couple of tipsters at BeerAdvocate.com recommended an Oak Aged Bourbon Stout that they were keeping off the menu on the downlow.....lowdown.....no doubt :)

We went to the Empire State Building location (34th st/5th ave) since it was on the way to Ginger Man. Given the location, the atmosphere was quite touristy with a bit of spillover from the ESB tours. The makeup of the crowd is probably what contributed to seemingly more food movement than beer movement. But, we were here for ourselves, not for the tourists :)

The friendliness of the staff was a bit higher than average, I thought, but lacking a bit in beer knowledge. Once again, this probably is a result of the typical crowd at the bar. Those that were drinking beers appeared to be favoring the lighter beers (e.g. pale ales and light lagers).

On tap for this Friday afternoon of Labor Day weekend was: Empire Premium (lager); Indian 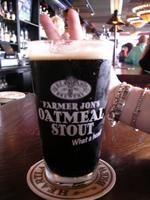 River Light (pale ale); Summertime Apricot Ale; Matrimony Ale (saison); Smiling Pumpkin Ale; Cornhusker Lager; Harvest Wheat; IPA; and Red Rooster. Patty indulged in the Farmer Jon's Oatmeal Stout and I took the advice of my BA friends and asked for the "secret" Oak Aged Bourbon Stout. The bartender looked at me quizically, then said she'd check to see if there was any left. There was, though presumably it was near the end. This is what I figured must have contributed to the thinness of the beer. However, the oakiness was definitely coming through all around the beer, while I was getting very little hint of the bourbon flavor.

The oatmeal stout that Patty drank also was adequate, but not overly memorable. If we had stayed longer, I would have liked to try the Red Rooster Ale and the Smiling Pumpkin Ale. Also, if this had been a later stop on the tour, Matt would have benefited from a growler of the Matrimony Ale in honor of his wedding weekend......but, alas he was not so fortunate! Apparently, also according to my BA friends, the ESB location for Heartland is the best of several in Manhattan.

Therefore, my recommendation is to give it a shot while in Manhattan, but only if you're waiting on a tour or looking for some half-decent food with a "by-the-way" beer. p.s. even though these first two reviews were somewhat tepid, I promise that the bars and the reviews only get much better. Fortunately for us, the quality increased as the day went by. For example, next stop.....Ginger Man.