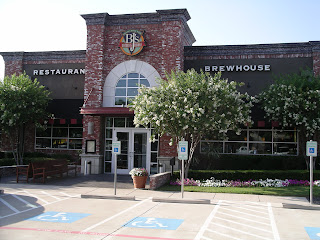 After years of hearing of the BJs big family of restaurants/brewpubs, I finally had the opportunity to visit the Addison, TX location a couple of times over the past few months. This last visit was sealed during the flight to Texas by Mufasa, aka Michael Ferguson, aka Director of Brewing Operations for BJs Brewery & Restaurant. No, he wasn't on the plane, physically. Only via podcast of the Sunday Session at The Brewing Network (direct link to the episode).

His appearance was one of the show's more interesting, opinionated, informative, and fun (all in one) sessions in a while. As he lavished praise (he's a family guy, why wouldn't he?!) on the beer, the deep dish pizza, and of course the Pazookie (more on that later) I became convinced that this most recent trip to Texas would include a stop at BJs. There's another location over near the Rangers Ballpark in Arlington, where I found myself for a Rangers/Tigers game, but the rain kept me from hunting down BJ's Arlington location. 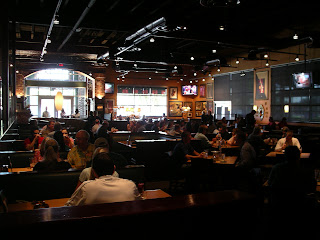 Most of this country's population, particularly in the far west, has a BJs location near them. There are around 80 of their spigot stops in 13 states, with more opening every year. They have the northeast in their sights in the coming years as well. Ferguson's job is to ensure brewing consistency across all locations. Most recently in 2002, the BJs family won the GABF distinction of Large Brewpub/Brewmaster of the Year.

In Texas, due to state laws, the beer must be brewed off-site and brought into the brewpubs. Therefore, the beers I had at the Addison location were brewed in Houston at Saint Arnold's brewery under Ferguson's direction. Also, under these same laws, they are permitted to carry non-BJs beers as well. In addition to the BJs lineup of beers, other domestic and imported beers from Pyramid to Piraat could also be found at this Addison, TX location. Speaking of brewery locations, less than 10 of the locations are actual breweries...but, I didn't inquire as to the arrangements in other states for getting BJs beer to the various locations. 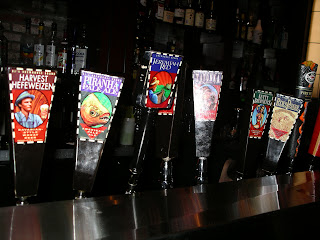 And how were the beers? For a lineup of standard bearers that get mass produced for dozens of locations, they do a very decent job of making beers that are mighty drinkable, and oh by the way award-winning, without being boring. They hit all the right marks from a basic Blonde/Kölsch, a refreshing Pilsner, and a subtle Wit to a zesty Hefeweizen, up to the fuller-bodied Jeremiah Red with a bigger ABV kick, and a flavorful Porter and imperial Stout.

The food menu at BJs shines as much as the beer as they cover all of the bases with an assortment of both standard and creative appetizers and salads. One of the hallmarks of the menu is the classic deep dish pizzas with all sorts of toppings available a la carte style. A full compliment of pasta dishes, sandwiches, stuffed potatoes, "knife and fork sandwiches," and half-pound burgers round out the robust menu.

While I enjoyed the Porter with the Pazookie (think, deep dish cookie with ice cream served in a variety of manners), my hunch is that I would have preferred the Tatonka (isn't it just plain fun to say Tatonka?) and its bigger, richer flavors to match up against the cookie and ice cream dessert. They brew their own root beer as well for a dessert menu item, but it's really difficult to get by the Pazookie, at least for this palate. 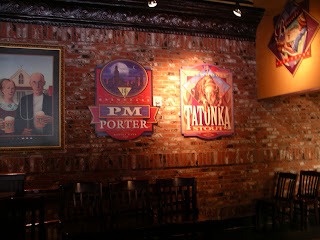 When visiting BJs, I've only sat at the bar but each time received great service with just the right amount of interaction. There are plenty of TVs if socializing is not really your thing.

One visit was with an Ohio transplanted bartender who shared with me some of his learning curve living in the south. Another time was with a bartender named Trina who trained under Ferguson and had nothing but praise for him and was interested to hear how I knew of him. She gave me some background on how each location ideally has at least one staff member (someone please help me with the acronym...is it FBT? Final Beer Taster?...or something like that) that serves as the resident non-brewer expert regarding the BJs lineup of brews.

When out in Colorado next month for GABF, I'm looking forward to checking out the local BJs and see if/how the model is different. If any of you have your own reactions from a trip to BJs, I'd be interested in hearing them. As tendencies go, I'm sure there will be some "anti-chain" backlash out there. But, in my opinion, this is one "chain" that should not be passed over.

I agree with "this is one "chain" that should not be passed over." I have thoroughly enjoyed the few Southern California locations I frequent. Piranha pale ale is still one of my all-time favorite pale ales, and seasonals such as the Grand Cru, Oktoberfest, Witbier, and Oatmeal stout have all ranged from solid to excellent.

In other states, not all BJ's are brewpubs; some brew for themselves and also distribute to other BJ's locations that do not brew.

Under Texas law, each BJ's would have to be licensed as a brewpub and only brew on-site, an expensive proposition. That's why they chose to contract through Saint Arnold for the entire state.

They are aggressively expanding eastward. Many TX BJ's are brand new, including the one in Arlington (nowhere near the Ballpark).