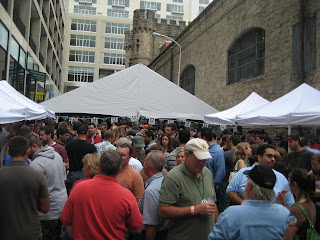 If my notes here sound a bit like kindly Mr. Curtin's, then I should apologize straightaway. But, please don't hold it against me and don't make any conclusions about what that might mean. Simple and sheer coincidence, I say. I ran into him once at the beginning. Then, either because he was intimidated by my incredible sense of fashion (truth now, who wasn't!?) or he needed to put the wraps on a brilliant Dubya piece, I never saw him after that. Young lasses were even asking after him (yes, you'll just have to believe me on this one) looking to share a beer with him. I arrived near the end of the VIP session (I was busy laying a solid base of breakfast food at the over-the-top breakfast eatery, Classic Diner, in Malvern, PA) and claimed my 1 liter Spaten stein. This was a nice touch to Philly's first attempt at a traditional Oktoberfest. Though, whether anyone really needed to be drinking some of these not-so-sessiony beers out of the steins is another question (lest ye think I throw stones, I could be found drinking more than one greater than 4% ABV beer out of said stein...so there you go!), they certainly did lend an air of Oktoberfest to our Octoberfest here in Philly. 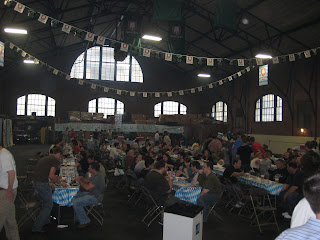 Once I got squared away with green tickets, pink tickets, blue tickets, festival guide, and a stein I was off to grab a Spaten and Franziskaner...perfect must haves for the Oktoberfest celebration at the 23rd Street Armory. The venue seemed perfect to host this event and could likely accommodate a crowd of at least another 50%. While the outdoor area never got annoyingly crowded, there was much more room inside that could have been better utilized to spread the crowd more evenly around the event. Lines were never much of an issue either, unless you were standing in a restroom line where I heard of multiple complaints of 30-45 minute waits. Once the downstairs restrooms were opened to the general public, things eased up a bit in that regard. 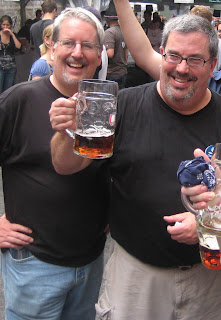 Other than running into a lot of the usual industry folk, the face of the general admission crowd tended to be more of an anonymous one to me. Generally speaking, that all worked out okay. Save for the occasional thrown plastic cup during spirited beer chugging games or the one dropped glass stein that I heard, the crowd was fairly well behaved. The band provided mostly non-Oktoberfest style music, which I thought a bit curious, but it certainly was not a showstopper. I noticed heaping plates of food from the buffet line, but after my aforementioned breakfast of eggs benedict, bacon, potatoes, I only had room for my liquid bread at this time. The food was complimentary during the VIP session and available for a fee during the general session; many seemed more than happy to indulge. Alright now, have I talked about everything except for the beer? Other than the "typical" German beers (Spaten, Franziskaner, Hacker-Pschorr) and some atypical German beers (brought in specially as "Monk's" fest beers, though once again agreeing with Jack I didn't find too much spectacular about these other than perhaps the Weiherer Lager, described as a Kellerbier) this was mostly a local affair. There was one exception, Oskar Blues, which I couldn't complain about, since their Oskartoberfest (specially made for this festival, I was told...really?) made it on to my list of memorable beers from the session. (Sorry, even I had to read this paragraph more than once, but well, that's the way it's going to remain.) Also on my list of beers to remember were: Roy Pitz- Is anyone not talking about these guys? I, like Jack, had my first non-email encounter with Ryan, Jessie, and two of their beers. My not-so-expert opinion says these are guys are on the right track. Make sure you try the Ichabod and Ludwig's Revenge if you see them. They can be found in Pittsburgh (e.g. Piper's), Philly (many accounts), and numerous locations in between. River Horse- New management continues to bring interesting things out of the brewhouse. In the past, it's been the Double White. At this festival, it was the Dunkel Fester. Get your hands on some if you can (they've got their own Oktoberfest coming up in a few weeks). Yards- ESA is back, with a vengeance. Tom and the crew at their new location should be proud. Welcome Back! Dock Street- I'm anxious to see how Mike Fava's first trip to Denver goes. He's got 6 interesting beers headed off to GABF that all have the potential to stand up well in their categories. At Oktoberfest, he brought Docktoberfest. I'd say that the D stands for delicious. Nodding Head- Loved the Berliner Weisse, as expected. Though, not as expected was the notched down tartness (even though it was served without woodruff or raspberry). Still, a tasty treat. Stewart's- I don't know how may times I passed their stand until I saw them. Well, maybe because they were only pouring one beer under their banner. In any case, Ric hits another one out of the park with this year's Oktoberfest. 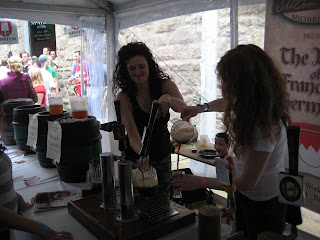 I actually did manage to meander up the street to T.A. Flannery's with my football pal for a couple of Sierra Nevadas and a few innings of Phillies division-clinching baseball before catching the 6:45pm train back to Paoli and TJs Drinkery. Where you know exactly what was happening. A tapping of Blind Pig (which, by the way, can you shake a stick in southeastern Pennsylvania without getting some sort of Russian River beer on draft?), a cask of Dead Reckoning, and plenty of the usual suspects that I'd figured I'd run into sooner or later. Scotty wouldn't fill my stein with Blind Pig and that was probably for the best. I was on the downside of my Big Fat Oktoberfest and making it to Victory's festival just wasn't in the cards by 10:30pm. So, I loosened my grip on the stein and decided I'm probably not the young buck that I used to be. The venue was perfect, the weather cooperated, and the Phillies won. Sunday was a washout in terms of rain, perfect for lazing and recovering...watching football, baseball, and movies. All in all, a great weekend. Hope you had the same. p.s. Did we ever find the Southampton tap handle?
Written by Bryan Kolesar at Monday, September 29, 2008

Email ThisBlogThis!Share to TwitterShare to FacebookShare to Pinterest
Categories: Events and Gatherings, Philadelphia

Looks great to me!

It was good to finally meet you in person! It seems that you got to try many more beers than I did, and it seems that I missed out on quite a bit of good ones. But a fun day regardless!

I'll chime in as well that it was a good event! (tho the bathroom line was an indication of poor planning if there ever was one-running around the back of the building shouldn't be necessary when you've spent $45 on a ticket)
Despite there being the overall O'fest beer vibe, there was definitely enough variety, and it was nice to be able to compare the same style from many breweries.
The monk's pitch beer was totally new to me-interesting!

Was it Southampton that I was looking for? Oh well, the search goes on for the Great Pumpkin!