I'm behind on so many things, including my writing around here. Plus I have 10 days to finish focusing on my preparation for the Pittsburgh Marathon on 5/3. So, this will be short with just a few pictures to color things up a bit.

I had the privilege of dining with a bunch of great people at Monk's Cafe in Philly on Tuesday night. Monk's was hosting the beers and people of Cantillon and Brasserie de la Senne and the kitchen services of Brian Morin from Beerbistro in Toronto.

This was obviously just another average Tuesday night dinner, right? Heheh. Only if you're accustomed to 9, count 'em nine, courses of food with 9 beers, 2 chefs, 2 breweries, 1 importer, 1 kick-ass beer bar...and if you look hard enough the partridge in the pear tree is probably lurking somewhere around 16th Street as well. Tom, Fergie, and the crew at Monk's Cafe in Philly sat the entire restaurant (both table and bar seats; was 83 the number that I heard?) with all of the sour lovers that could luckily secure a dinner reservation for what may turn out to be the standout beer dinner of the year at Monk's.

According to Tom, there was a waiting list of around 50 people after the original seating filled up in less than 10 minutes. No wonder. For the sake of saving time (and maybe making it easier to read?), I'm going to run down in bullet form a list of impressions, followed by the menu, then finally with the pictures at the end.

> how all of those chefs fit in one cozy Monk's kitchen is beyond me.

> though, with all of the potential chaos, the dinner was run to near flawlessness in terms of timing and quality.

> from Cantillon's family-run brewery, it was Jean Van Roy's first visit to the States...where better to begin than in Philly and at Monk's? He was duly impressed with finding Cantillon around town at various watering holes that he visited.

> Adam Glickman's kitchen at Monk's typically puts on an excellent accompanying food show at each beer dinner; imagine adding a chef like Brian Morin...simply, it worked...and well...let's look at some examples

> I love smoked salmon and with vinaigrette-soaked spinach tucked inside and crab and egg perched atop, this was a very nice dish

> the Beerbistro Salad (ah, the truffle oil) is alone almost worth making a trip to Toronto; luckily for those who purchased the cookbook, they can now make it at home.

> for once, the dessert was not necessarily the show-stealer for me > now, let's layer in the beer...

> the moderate sourness from the Gueuze and fresh, citrus flavors in the ceviche dish played real nicely against each other

> the Taras Boulba from Brasserie de la Senne by itself was not necessarily a favorite of mine, but when paired with the frog legs was...wow! nice combination

> the Equinox, had a detectable smoke flavor lurking underneath...but after sitting for over an hour, we're talking close to smoke porter territory (okay, that might be a tad exaggerated)

> Kriek and beets in the salad went very nicely together

> the Saison from De La Senne was my favorite beer of the evening. Snappingly tart just like I'd want and expect it to be. 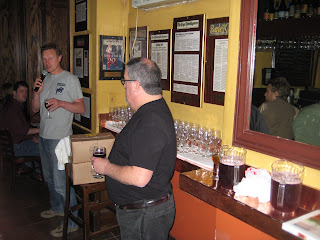 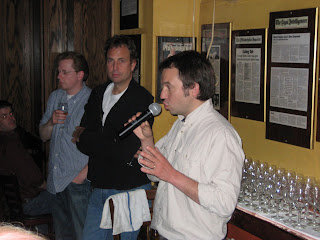 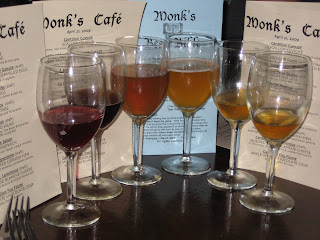 (A wide variety of beers centered around sour, or some variation of thereof, quickly filled the table) 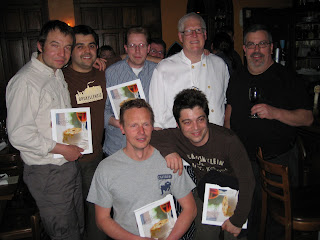 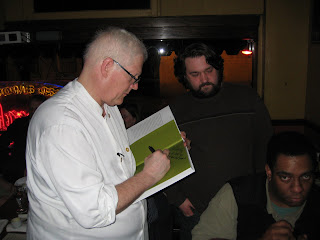