Gassy Jack settles in on tap at Victory 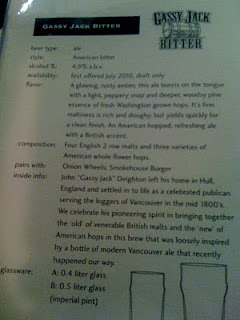 The waiter claimed the beer was named because of the, uh, intestinal effects that the unique combination of malts and hops in this particular beer deliver after being consumed...or some close paraphrasing of that description. Hm, I was a bit skeptical. I immediately first thought of another Jack (who wouldn't, eh?) that we all know and to whom we could all make humourous inferences, but figured otherwise and instead cracked open the beer menu where Victory's new Gassy Jack Bitter was described. Instead of getting into all of the details, perhaps you can instead read from the picture above. Sure enough, Gassy Jack the Beer is named after an early English settler and publican of British Columbia, John 'Gassy Jack' Deighton. Sounds like a better story than telling a customer that the beer was named because of its fart-inducing qualities...or maybe that's just me (?) To the beer...the important part of the story right? At 4.9% ABV, it starts to get into the session-y ballpark. Yet it still has a firm enough malt backbone to hold up to a Stockyard Pizza full of meats and cheeses. A good and easy drinker perfect for anytime, but especially the dog days of summer. I'm thinking a fillup of this beer is my growler's very near future.
Written by Bryan Kolesar at Friday, July 16, 2010

Of course one of the advantages of going to the brewery is finding beer like that you probably won't find elsewhere (with rare exception).