Unlike my feeble attempt three years ago, Andy and his crew at Teresa's Next Door knew exactly what to do when they brought a bundle of both above- and below-ground hop shoots back from Dan Weirback's hop farm in upstate Pennsylvania.

I stopped in at TND a few days ago and found almost the last of their hop shoot inventory prepared two special ways.

One was served like a salad of hop shoots and watercress, with feta cheese and cherry tomatoes as the primary accompaniments.

The other, my personal favorite, was prepared with a perfect piece of halibut topping a bed of ramps and hop shoots.

Unlike my attempt to serve with a mostly butter mixture, I learned here from Andy that it's all about the accompaniments and the presentation. Mine? Looked nearly as digusting as you could imagine. Theirs? A pleasure to look at and a mouthful of other flavors and textures to accompany the otherwise fairly bland hop shoots.

What about you? Have any of you found other restaurants working with hop shoots on their menu in the early- to mid-Spring season each year? 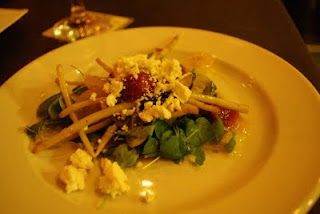 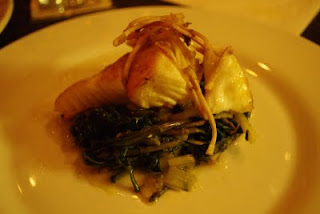 (halibut on ramps and hop shoots)

Email ThisBlogThis!Share to TwitterShare to FacebookShare to Pinterest
Categories: Teresa's Next Door, Weyerbacher