Tracking down a new Tröegs 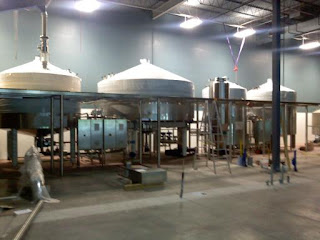 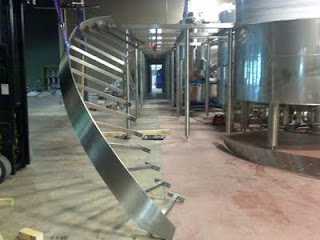 One of my most interesting and informative encounters of last weekend's BCTC at Ommegang (yes, yes...you will be hearing and seeing more — much more — from me on this wonderful festival topic soon), was seeing Ed Yashinsky (operations manager at Tröegs) at some bizarre hour of the morning — like 7 a.m. or something silly like that.

As I was walking the brewery property (I'm an early riser, regardless of my night's-before activities...and when I'm up, I'm up, usually can't fight that), I bump into Ed who apparently has a similar morning routine. He'd already been into town for an early morning café breakfast.

We got into a bit of a catch-up conversation on the brewery construction progress in Hershey, Pa. You are familiar with this, right? If not, go and visit Tröegs' website where they're doing a very nice job of documenting their own progress.

Since that early morning riser update from Yashinsky, he's sent along two of what appear to be previously-unpublished pictures of the new brewery. Those are the two pictures pasted above.

Tröegs has been hitting the market from all angles lately.

Their continually-expanding (and very wisely measured expansion) market distribution — it'd slipped by me that they are now in Ohio.

They keep on top of their brewers' blog where it's not uncommon to find transparent and useful information.

They've put out a cherry chocolate stout collaboratively brewed with Stone that I'll need to do a little side-by-side with my homebrewed version of the same recipe....or, at least, of the same title. I'm sure it will be a humbling experience!

One of these days, I'll find myself in Hershey hoping to bring you all a first-hand look at the progress prior to opening....currently looking at an October timeframe.
Written by Bryan Kolesar at Thursday, August 04, 2011