The Brewer's Plate at the National Constitution Center: March 10, 2013

After failing to show pictures to you from The Brewer's Plate in 2012 until just a few days ago, I figured I should better keep close tabs on myself to ensure that I get something out to you in a bit timelier fashion this time around. (See this year's pictures farther below.)

As for the 2013 Brewer's Plate, it was another spectacular display at the intersection of great beer and food in Philadelphia this past Sunday evening. For the second consecutive year, the National Constitution Center played host to nearly seventy local bakers, brewers, cheesemakers, chefs, chocolatiers, distillers, and ice cream makers. With the country's Founding Fathers in attendance and the Liberty Bell serving as a backdrop, the event solidified its position as one of the country's leading presentations of beer, food, and the combination of the two.

What, in hindsight, now seems like quaint beginnings at the (quite suitable) Reading Terminal Market back in 2005 has turned into a majestic sampling of beer and food (along with a few other select alcoholic beverages that have snuck in during recent years) for which all proceeds benefit Fair Food Philly. Here's a simple man's view of the event in 2006.

In 2013, the breweries are more numerous, the food more creative, and number of attendees greater than ever. One thing, though, has not changed — that is, the careful planning and attention to detail that goes into each deliberate pairing of restaurant and brewery. Without this, I believe discriminating palates would see right through a weaker effort and abandon this event. However, the enthusiasm and resulting opinions of The Brewer's Plate are higher than ever before.

Take, for example, in the VIP area where rising stars on local the brewing scene, Forest & Main and Tired Hands, put on a great show pairing, respectively, their Le Jeune with cheeses from Yellow Springs Farm and FarmHands with cheeses from long-time friend-of-Tired-Hands, Birchrun Hills Farm.

But, it was Tired Hands' Mrs. Pigman that became one of the most talked about beers at this event. While numerous food and beer items were overheard being discussed amongst attendees across the festival venue, likely no beer got more air time amongst the beer geeks than this Triple IPA from Ardmore in suburban Ardmore. If I recall correctly, owner/brewer Jean Broillet referred to this 11.5% ABV as his "reactionary beer" nod to the perenially-hyped Pliny The Younger from Russian River Brewing Company in California. Mrs. Pigman exhibits a slightly less weighty mouthfeel while still delivering a whole lot of hop, fruit, and floral flavors and well-disguised alcohol. Dare I say it was just as tasty yet even more drinkable than that beer from Santa Rosa? Will lines begin forming around the block in downtown Ardmore for future releases of this beer? Many questions to explore with future research :)

Beer and cheese. That was easy, right? Every month that goes by, more folks are catching on to this inevitably and undeniably ideal pairing of food and beverage with beer and cheese events dotting the calendar at brewpubs, tasting rooms, and restaurants around the country.

Also in the VIP area, Fork Restaurant from Old City was serving up a nice plate of barley sausage (braised in barleywine) that was fine-and-dandy on its own, but was more than happy to be joined for the party by a Braumeister Pilsner from Victory — though, that was my pairing not the "intended" one.

How about some more bratwurst and beer? When it comes from Brauhaus Schmitz (and acclaimed chef, Jeremy Nolen), topped with beer-braised sauerkraut and Pilsner horseradish mustard, it becomes a slam-dunk winner paired with Neshaminy Creek's phenomenal Trauger Pilsner.

Another sandwich and beer winning combination was Sly Fox's rich and sturdy Ichor (quadrupel) which stood up to and paired nicely with the Cochon De Lait Po-Boy from Royal Tavern in South Philly. I made the mistake (well, not really a mistake) of thinking the Pikeland Pils went nicely with the sandwich — and it did, for sure — but, oh boy, when the brewery's sales manager, Patrick Mullin, served up the maltiness of the Ichor against the burnt edges of the pig meat? Perfection.

I wasn't doing the cider that it was being paired with, but I did have to restrain myself from asking for seconds of the Duck Confit-Foie Gras Bahn Mi from London Grill. Tremendous. Will need to keep this in mind to look for next time I'm in Fairmount.

Also earning accolades in my book without a specific pairing partner (though, they were paired with the equally delicious beers from Bullfrog, the pairing wasn't working for me; could just be me, of course) was the incredible Venetian Meatball plated up by the fine folks over at C19 Chichetteria on Rittenhouse Square. Again, self-control kept me from grabbing for a second one.

McKenzie Brew House was back again on my "winners list" with two beers they brought from their new Devon location (overlooking US202 across from the Gateway Shopping Center), Valleymaker Imperial Stout and McKenzie de Luxe Strong Saison. As in the past (and I had to do it twice on this particular evening), I strongly encourage anyone who downplays the brewpub as a result of only ever having tried the "house beers" to give them a shot at any one of their locations (Devon, Frazer/Malvern, Glen Mills) and get into a few of beers like these two. There's constantly a rotation of beers that are bound to satisfy beer geeks of every stripe.

Dock Street makes some great beer in West Philly. They have a new neighbor, less than a year old, just a few blocks away making great ice cream. Beer and ice cream. Surely you've heard they go well together. It didn't take long for these two local entities to do something with their culinary creativity. In the VIP "Speakeasy", amongst a room full of spirits and sweets, Weckerly's (43rd and Baltimore) incorporated the brewery's Man Full Of Trouble Porter into their ice cream recipe of molasses and chocolate-covered brown butter shortbread cookies. Now you've got at least three reasons to head west of Penn's campus (the third being Local 44, if you didn't guess). I'd give you more reasons, but start with those three.

Beer with Cheese. or Pork. or Chocolate. or Ice Cream. Some of the most heavenly combinations in the world of food and beverage. The Brewer's Plate once again delivered more than any one attendee could ask for or reasonably consume. Yet, no one appeared to be complaining.

Throughout the evening, the Hoppin' John Orchestra, again in 2013, entertained the crowd with music that kept the joint hopping (with a name like that, they'd better right?) hitting a crescendo with a "walk-around" just before closing down the event for another successful year showcasing the best of beer and food in Philadelphia. 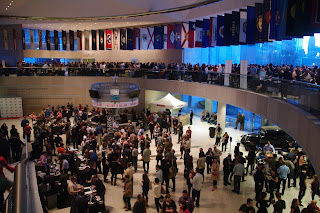 The majestic National Constitution Center once again played host to The Brewer's Plate. 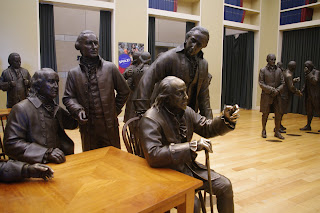 Ben Franklin holding court in the Signers Hall. He looks like he could use a beer. 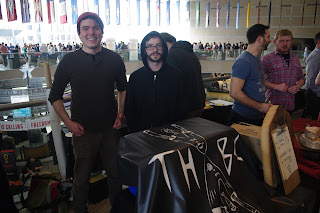 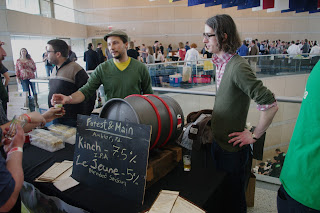 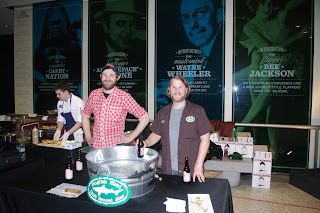 Some tough guys have Dogfish Head's back. 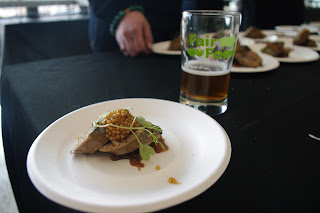 An excellent bite of sausage from Fork. 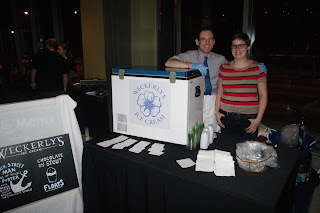 Weckerly paired with Dock Street. Makes sense given that they are neighbors just a few blocks apart in West Philly. 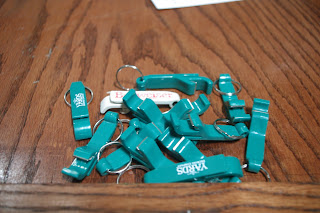 That sneaky Budweiser always trying to muscle in where it doesn't belong/is not wanted. 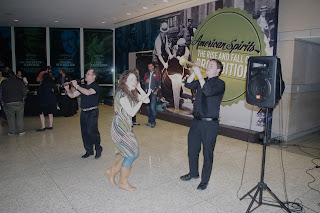