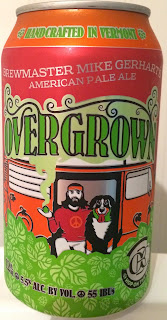 For your consumption, here's a mashup of what I've read, what I've heard, and what I've tasted in the past week. As I mentioned last week as I began to revitalize this feature, the primary focus will be on the greater Philadelphia region first, extending outward as it seems interesting or necessary.

Beer "of the week"
Another canned option of a beer in the 5% ABV range has presented itself to me as a potential yearly occupant of my cooler. Not only does the Otter Creek Overgrown Pale Ale come packaged in a can bearing an image of old friend (from Dogfish Head days) Mike Gerhart, the liquid inside is quite perfect for everything that the fall brings: bonfires; tailgating; post-yard work sessions; post-exercise rehydration; and end of season picnics.

In fact, the first can of the case I purchased helped chase down some crack-and-eat crabs spread across the table a few weeks ago. It's hop-forward but in a citrus, sweet, and only slightly bitter way. This can be a crowd-pleaser for seasoned beer lovers and newbies alike (my test case confirms this).

Openings
I've enjoyed the Mad Mex's in Pittsburgh, State College, and University City (Philly). In the hoopla of finishing the manuscript a few months ago, I must've missed the opening in Wynnewood, just across Philly's western city line. [Mad Mex]

Closures
If you read this when it "publishes" around 1 p.m. today (Friday Oct. 31), you should likely find me at Nodding Head for a long lunch helping them drain some kegs prior to shutting down business on Sansom Street later tonight. This condition is only expected to be temporary as the brewpub begins its relocation efforts elsewhere in the city.

It's been a great run in Center City, but I think I speak for many that look forward to owner Curt Decker, brewer Gordon Grubb, and the entire crew establishing something new and even better in one of the city's lauded neighborhoods. Here's a link to a trip down memory lane at Nodding Head with some words, pictures, and videos.

And coming a bit further down the pike is the SawTown Tavern, part ownership coming from Mike "Scoats" Scotese of The Grey Lodge and Hop Angel Brauhaus. [Jack Curtin]

Interesting reading
This is just as germane, if not more so, today as it was over three years ago. The only one I can't really get behind is number ten. [Ding's Beer Blog]

I can vouch, as I think many can, for Calagione's continued relentless and passionate hands-on pursuit of great beer at Dogfish Head. [Dogfish Head]

Major Announcements
The arrival of the brewhouse in Ardmore means that Iron Hill is creeping toward opening its eleventh location in the next couple of months. [Iron Hill Brewery & Restaurant]

Upcoming Events
This weekend sees a bunch of beer events around the region. A couple of big ones stick out. One in the city at Bishop's Collar (Sun.) and one just outside the city in Hulmeville at the Hulmeville Inn (Sat.)