The Boulevard of Happy Dreams 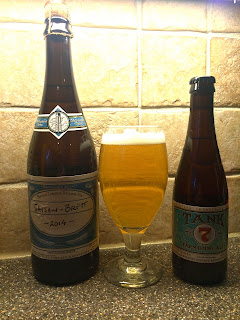 Check another brewery off my travel list. Over the years, countless breweries from outside the northeast accompanied me aboard planes (even growlers back in those glorious days gone by of carrying clinking bottles and growlers on to a plane) or, in recent years, tucked somewhat lovingly — not to mention, carefully — into checked luggage.

Breweries not distributed in the northeast like Cigar City, Deschutes, and New Belgium, just to name a very few, have wound up in my home cooler for later enjoyment with family or friends. Captain Lawrence soon will be another. I wouldn't be surprised if someday I'll be able to add Jester King to the list.

Boulevard Brewing Company is likewise now checked off the list of breweries that I can't find on store shelves in the northeast as this coming week marks a big push by the midwestern brewery out of Kansas City and its local Philadelphia distributor, Muller Inc.

Helping to fuel the growth and distribution of Boulevard is the sale to Duvel Moortgat in 2013, bringing the brewery under the family umbrella with another U.S. brewing powerhouse, Brewery Ommegang in New York, also distributed by Muller around the Philadelphia region.

And this is a very good thing.

For years, when traveling in the south and midwest, particularly Texas, I'd keep an eye open for any beers from Boulevard. I knew that I could always count on the refreshing Unfiltered Wheat Beer (4.4% ABV) and ZŌN Witbier (also 4.4% ABV). The former is a straight-ahead, easy-drinking wheat beer described as the "best-selling craft beer in the midwest" and the latter is a lightly fruity and spicy (orange and coriander) limited summer beer that goes great with salads and shellfish. ZŌN fares well at the annual Great American Beer Festival (GABF) — which coincidentally unveils the 2014 winners tomorrow — winning two gold and two bronze medals in the last five years.

The Smokestack Series is an impressive lineup of both regular and limited beers that pay homage to interestingly diverse ingredients and flavors as well as the smokestack that looms over the brewery.

The Sixth Glass is a 10.5% Quadrupel that goes equally great with barbecue or rich chocolate desserts. Tank 7 Farmhouse Ale (8.5% Saison/Farmhouse with a citrus hop, pepper spice, and dry finish) and Saison-Brett (an 8.5% dry-hopped version of Tank 7 finished in the bottle with Brettanomyces for three months) are the two that have come home the most with me from road trips that I could not be more thrilled to see around Philly hopefully on a regular basis. I should also thank the powers-that-be for the special delivery package that allowed me to confirm that these beers are still as good as I've recalled them.

One day, I'm sure I'll make it to Kansas City and have an opportunity to visit the hundred-year-old building that founder John McDonald built his "vintage Bavarian brewhouse" inside in 1989, growing it to a 100-employee operation distributing beer in some portion of nearly thirty states and the District of Columbia. It's still a brewery with a tasting room; no pub operation, just turning out great beer to an ever widening and appreciative audience.

Here are some places around the greater Philly area where you can find Boulevard (and McDonald) and Muller showcasing the beers during the next week.

Event descriptions from the press release:

Boulevard & BBQ in Berks
Liberty Taproom in nearby Reading, PA officially kicks off On the Boulevard with a nod to the Midwestern brewery’s roots. Kansas City-style BBQ dishes will come fast and hot out of the kitchen and Boulevard beers will take over the taps.

Where: Memphis Taproom, 2331 East Cumberland Street, Philadelphia, PA 19125
=-=-=-=-=-=-=
Boulevard on the Back Porch
The back patio at the Spinnerstown Hotel will become the hottest spot in the suburbs, pairing a special “sweet, spicy and sticky” barbecue menu with Boulevard beers for a tap takeover. This is a pay-as-you-go event.

Where: Spinnerstown Hotel, 2195 Spinnerstown Road, Spinnerstown, PA 18968
=-=-=-=-=-=-=
Boulevard Backyard BBQ at Barren Hill
Head brewer Scott Morrison turns over selected taps to his new friends from Missouri in a collaborative night filled with craft brews and barbecue at Barren Hill. You can pay-as-you-go or purchase a $25 ticket ahead of the event. Featured pairings include: 80-Acre Hoppy Wheat with Baby Back Ribs; Tank 7 with Pepper Glazed Wings; Single-Wide IPA with Pulled Pork Sandwich; Pop-Up Session IPA with Slow-Cooked Smoked Brisket.

Where: Barren Hill Tavern & Brewery, 646 Germantown Pike, Lafayette Hill, PA 19444
=-=-=-=-=-=-=
Boulevard at The Franklin
The Culinary Pioneers over at DiBruno Brothers plan to welcome Boulevard to Philadelphia in the most delicious – and brotherly-loved -- way possible by pairing their famous Cheese & Charcuterie plates with beer samples. DiBruno’s expert cheesemongers will be on hand to help guide guests through pairing principles.

Where: The Franklin, 834 Chestnut Street, Philadelphia, PA 19139
=-=-=-=-=-=-=
Beer & BBQ at Fette Sau
Kansas City has been called the Paris of the Midwest, thanks to sweeping boulevards, pristine fountains and a carefree attitude. Embrace the spirit of Kansas City at Fette Sau! Fishtown’s best barbecue joint will be offering boxes of house-made caramel popcorn, seasoned with house rub, and tins of smoked almonds -- complimentary with the purchase of your first Boulevard beer.

Where: Fette Sau, 1208 Frankford Avenue, Philadelphia, PA 19125
=-=-=-=-=-=-=
Grilling & Chilling with Boulevard: Text-to-Win Raffle
Enter our Text-to-Win Raffle at Bell Beverage on Friday, October 10 – or enter the contest at any one of 10 participating bottle shops throughout Philadelphia and the surrounding suburbs on Tuesday, October 7. You must be present to enter the Text-to-Win Raffle. You don’t need to be present to win, but the winner can expect an extra special prize if he or she is present at Bell. Drawing is scheduled promptly for 6 p.m. The Grand Prize features a deluxe Weber Grill, $100 DiBruno’s gift certificate, “House of Cheese” by Tenaya Darlington, DiBruno’s apron, Boulevard brews and some other cool swag from the brewery. Boulevard beer samples will accompany delectable Cheese & Charcuterie plates from DiBruno Brothers. See complete events listings below for more information on participating bottle shops.

Where: Bell Beverage, 2809 South Front Street, Philadelphia, PA 19148
=-=-=-=-=-=-=
Boulevard on the Avenue
Don’t miss the marquee event of the week! Boulevard, a company that prides itself on supporting neighborhood businesses, will shut down Sigel Street, outside Moonshine Bar, for a Crafts & Drafts Festival. In keeping with the spirit of Midwestern hospitality, some of Philadelphia’s favorite artisans, like Little Baby’s Ice Cream, Elixr Coffee and Smak Parlour Fashion Truck, will be on hand to showcase and sell their wares. Boulevard beers will be flowing all day, and guests will be dancing in the streets, jiving to the lively tunes from the New Sound Brass Band, with prizes and raffles galore.

Don’t Miss These Other Exciting Events: