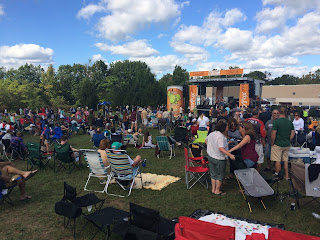 (a picture-perfect day for big crowds at Can Jam Festival 2016 at Sly Fox Brewing Company in Pottstown, Pa.)
The annual Can Jam Festival at Sly Fox's brewery in Pottstown, Pa. has quickly (and somewhat quietly) become one of the region's destination events. I say "quietly" because the early years of this festival were more exclusively focused on the competition - the Kan Jam tournament. I won't go into much detail of game rules here, but basically it works like any two-person team game such as horseshoes. In Kam Jam, teams alternate throwing discs to open cans 50 feet away. Points are earned a variety of ways and scoring goes to 21. It's addictive.

So addictive that, while I don't have documented or validated numbers on this, my guess is that in the early years of Sly Fox-hosted Kan Jam tournaments held in the city during Philly Beer Week, there were no more than 16 teams. Who knows, maybe 8 teams?

Click here for a look back to the 2012 tournament held at the Four Seasons Hotel where William Reed (Standard Tap/Johnny Brenda's/and a new venture soon-to-be-named) and I took second place.

By the time the tournament was taken out to the brewery's Phoenixville location (on a very uninviting and unforgiving macadam parking lot), the game was really catching on and (again, guessing here) there could have been 16 or 32 participating teams. Still, it was mostly about the game.

Then in 2012, after the brewery opened its impressive location in Pottstown (at the edge of the Pottstown Municipal Airport, if you've never been....I still grin when I see that they're located on Circle of Progress Drive), many events were naturally moved there to the much more accommodating space for large events.

I recall talking with owner John Giannopoulos in Phoenixville during the Goat Races one year saying something to the extent of "...your new location is so perfect for events like this (Goat Races). You've got to move it there; you're going to right?...." His response was rooted in skepticism that fans of the brewery would "find them in" and make the effort to go to Pottstown.

I think that the crowds that show up for the Goat Races in May, the Can Jam Festival in September, Cyclocross in November, and many other medium- and large-scale events held in Pottstown have rightfully concluded that Sly Fox has one of the region's more ideal brewery (and brewery event) locations.

The 2012 Can Jam Festival attracted 64 teams and you can see a full picture gallery here. 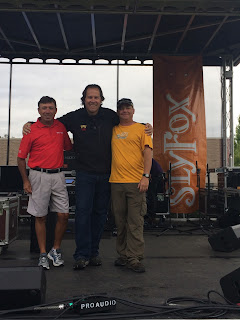 (from left: Charlie Sciandra, Kan Jam inventor; Brian O'Reilly, Sly Fox Brewmaster; Corey Reid, Sly Fox Ambassador at Can Jam Festival 2016 at Sly Fox Brewing Company in Pottstown, Pa.)
Back to Can Jam Festival circa 2016. This past weekend's tournament saw 160 registered teams (!) playing in double-elimination bracket format. That's 320 players. And consequently, 320 automatic customers of the brewery before one additional guest showed up. Further, in one of the wisest moves, a few years ago, Sly Fox added music to the day's events. Wise, I say, because teams that exit the tournament quickly might likely pack up and head home otherwise. With the lineup of five spectacular local bands, there's all the more reason to stay and, naturally, drop a few more dollars the brewery's way.

The brewery estimates that upwards of 3,000 people in total were in attendance for Can Jam 2016. This year, there was Ben Arnold, American Babies, Jason Fraticelli, and Chestnut Grove on the live music docket. But the band that I really wanted to see (for the second time this year... the first time being during Philly Beer Week at Deschutes Street Pub) was Swift Technique, the amazing local Philly funk band that puts the art in party.

Want to see the Swift Technique band in action? Check this video over at YouTube.

Pictures are very few in number this year as I teamed up with Patrick Mullin (former Director of Sales at Sly Fox) for the tournament. We went five rounds before finally bowing out. We had a good thing going until it ran out of steam. Not a bad thing as we got to focus on the people, the beer, the food, and the music.

P.S. Did I forget to mention that given that this is now generally accepted as the largest Kan Jam Tournament in the world, the game's inventor Charlie Sciandra showed up to recognize and participate in the event? You can see longtime brewery fixture, Corey Reid, introduce him here in this YouTube video.