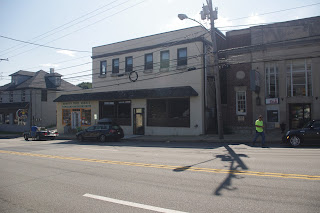 (Looking south across Lancaster Avenue at the future home of La Cabra Brewing Company in Berywn, Pa.)
La Cabra Brewing Company is shaping up to be one of the Philadelphia area's most anticipated new brewpub ventures of 2016. With nearly all the licensing and inspection hurdles out of the way, it's construction progress and finishing touches that will pave the critical path to an anticipated opening date in late October/early November. 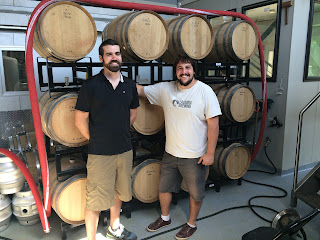 (In the brewhouse at the future home of La Cabra Brewing Company — Chuck Golder, GM, and Dan Popernack, Brewer and Operating Partner)
Dan Popernack (Operating Partner and, currently sole, brewer), Chuck Golder (General Manager), and John Hearn (Chef) are the three faces that will be most commonly seen at the two-story brewpub across from the Berwyn train station. They project to eventually have 30-40 staff covering the combined front- and back-of-the-house operations.

The kitchen staff will be turning out a menu that is being described as Latin-American, a cuisine that Popernack, with his South American travels and time lived in Spain, believes has plenty of untapped pairing potential with the beer world. Additionally, in his former life, he was a high school Spanish teacher. Golder has worked his entire career in food and beverage, most recently at Merion Country Club. With this team, Popernack reports feeling "blessed because both the left and right hands of the business are strong" and they "wouldn't be where we are today otherwise" and he "wouldn't be as confident as I am looking forward to opening" if it wasn't for the dependable experience across the board at La Cabra. 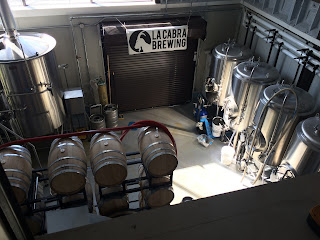 (Customers will have a second floor glimpse into the brewhouse at La Cabra Brewing Company in Berwyn, Pa.)
Popernack grew his brewing prowess from his Malvern home garage while he sought the perfect location for his business vision. After nearly two years of searching, he and the executive partnership group (comprised of six individuals in total that he says shares his same passion for the brewpub's vision) purchased the location at 642 Lancaster Avenue, former home of a futon business and a spot that they were assured "could never house a brewery".

In fact, it will house two floors with multiple rooms and seating areas for customers, a full brewhouse, a basement with upwards of 100 new American oak barrels, and two bars running 12 CO2 draft lines, 1 local cider tap, 1 nitrogen tap, 2 handpumps, and a PA bottled wine list. Coming out of the brewhouse, Popernack expects to do it all up and down the spectrum of beer styles from big beers to easy-drinking approachable beers. His passion has shown through in barrel-aged and sour beers and admittedly will ultimately settle into a menu that is most well-received by the customers. 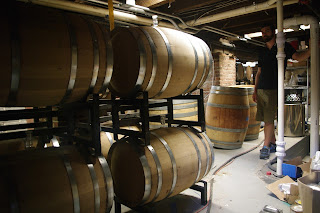 (Barrels will play an important role in the beer menu at La Cabra Brewing Company in Berwyn, Pa.)
Berwyn has been making a slow transformation from a town often seen as a drive-through from Wayne to Paoli along Lancaster Avenue (route 30). There's a recently new pedestrian bridge over the railroad tracks and continued development taking place (e.g. longtime Fritz's Lumber has been sold and will be cleared for future development) that La Cabra looks to be part of in making Berwyn a more walkable town of destination bars, restaurants, and shops. Maybe not ultimately like nearby Wayne, but much more than it was ten years ago. Between on-street parking, train station parking, and nearly 40 additional parking spaces being made available behind La Cabra, it's good to see that this important aspect is also being addressed.

I look forward to what thus far sounds like a very promising brewing establishment addition to the area. Considering that between Tired Hands and Iron Hill in Ardmore and Victory in Downingtown, the only other brewing entity along the "Main Line" is McKenzie Brew House, La Cabra should certainly have little trouble tapping into a thirsty beer crowd. And, in Berwyn, there's certainly space for them amongst an already diverse set of established restaurants and bars such as Fellini's (byo Italian), Tiramisu (unique Jewish-Roman), Berwyn Tavern (a down-to-earth bar), Casey's (similar to BT), 30 Main (live music), Nectar (upscale), and others.

Popernack sees this as an advantage and vows to "bend over backwards to grow in Berwyn and work with the community". He mentioned in describing the La Cabra vision how "gran vecino" is the brewpub's motto which literally translates to "great neighbor". 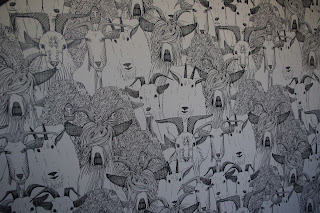 (You'll get plenty of reminders of what La Cabra translates to at La Cabra Brewing Company in Berwyn, Pa.)
Also, with regard to the name La Cabra which translates to goat in Spanish - that "goats are intelligent, persistent, and fun. And who can look at a goat and not say 'I'd like to hang out with a goat'?!" Which ties into another important concept to Popernack and the team - fun. "If beer becomes unfun," he says, "we're losing our critical advantage over other beverages."

Furthermore, he and the ownership group see value beyond the beer and beyond the profits - that is, giving employees a "positive environment in which to work" and "supporting charitable groups in everyday operations", something that he hopes to grow quickly into a standard program at La Cabra.

Lots of potential goodness brewing at La Cabra in Berwyn. Being nearly in my backyard has me excited for this to finally come to fruition and you can bet I'll be reporting back frequently as it grows. 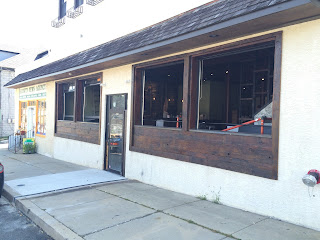 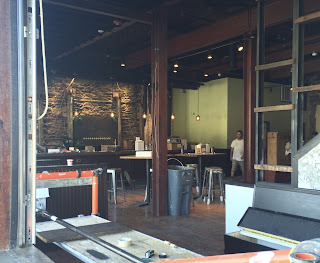 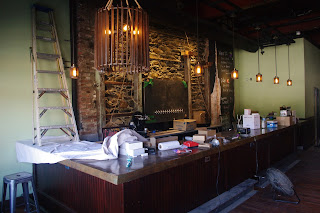 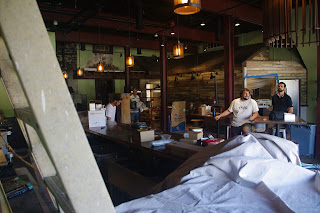 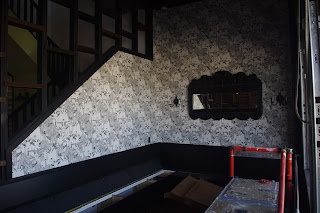 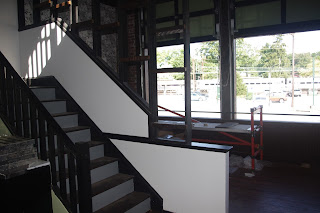 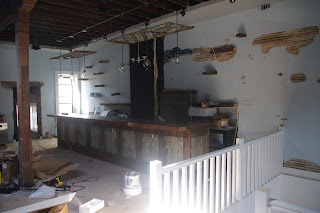 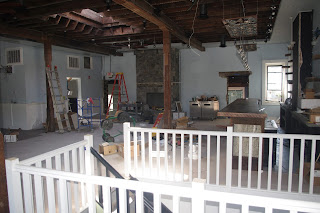 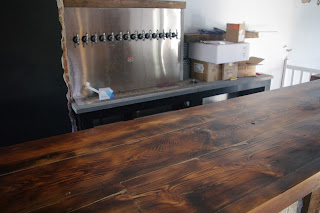 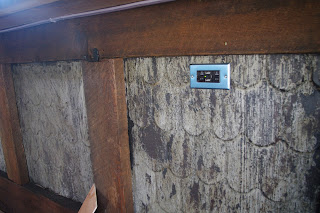 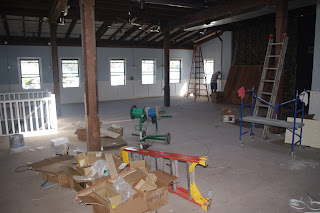 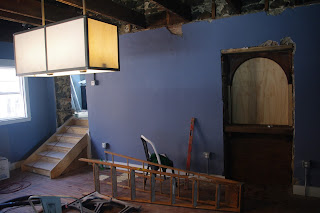 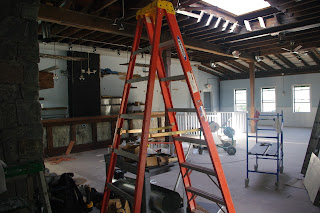 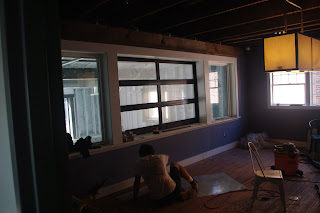 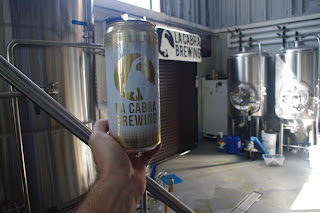 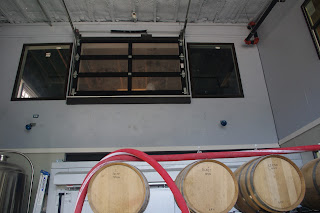 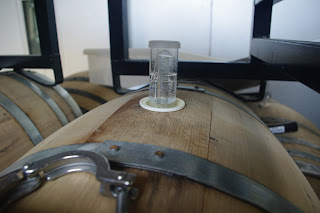