More of my writing in more places; need more beer (?!) 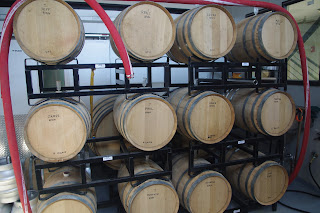 Seems like there's always something new going on around here.

For the past year, I've been doing a beer column for the striking County Lines Magazine in Chester County, Pa. Here's a link to my last column that served as a pre-GABF 2016 look at some local brewers such as Sly Fox, Nodding Head, Conshohocken, Iron Hill, Tröegs, McKenzie Brew House, and Stoudts and their past and present experience with the massive GABF competition.

Then, for my newest thing. I never made an official announcement, so this might as well be it. Woody Chandler has moved on from his column at Ale Street News. For over ten years, he's been tracking down and reporting on the beer news all around Pennsylvania (excluding Philly, which is covered by Lee Porter).

Now I've got the keyboard. Here's a link to my first column in the Oct./Nov. 2016 issue. In it, I covered the latest news at Columbia Kettle Works, Fegley's Brew Works, Four Seasons, Free Will, Iron Hill, La Cabra, Marzoni's, Spring House, Stickman, Stoudts, Tröegs, and Victory.

If you know me well, you should know that I'm going to enjoy this gig.

Obviously in such a large state, it's impossible to cover even a quarter of the breweries and breweries-in-planning in each issue. So I'll be talking about interesting brewery news around a theme. In this issue, on such short notice 'til deadline, I simply began with Woody's home turf of Lancaster, looped out west and back to the east and the soon-to-be-brand-new La Cabra in Berwyn.

In the next issue, I'm looking to shape a theme of football in the state (high school powerhouses, college programs, pro football legends, and any crossover of football into the brewhouses). I've got a pretty good head-start on this, but if you have any insights that you'd like to see me touch on, as always, feel free to drop a note to me.