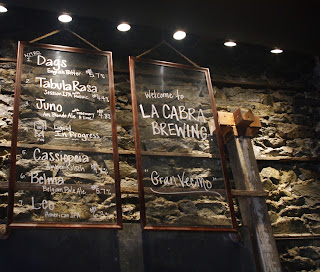 (Eight to nine drafts to be available on opening day, October 25, with more to come in the days and weeks after.)
Let's get this breaking news out of the way first thing — La Cabra Brewing Company is cleared to open its doors to the public for the first time at 3 p.m. on October 25.

They've come a long way in the last few months and since I last visited a little over a month ago. Now all the powers-that-be have given had their say and the beer lines have been hooked up to the brite/serving tanks. All that's left are some remaining construction touches and final staff prepping.

I stopped by yesterday morning to find brewer and operating partner Dan Popernack and chef John Hearn busy at work but willing to take time to show me a bit of what's changed, give me an update on the remaining week's work, and slide a few tastes of beer and food my way.

They plan to open La Cabra's doors on Tuesday, October 25 as if it was just another day of business. This way, they hope to be able to gently break in the staff, work out any kinks, and give customers the smoothest introduction in the early days and weeks to one of the area's most anticipated new brewpub ventures.

While the second floor and mezzanine room will eventually be available for private party rentals, the entire facility (total capacity around 240) will be open and available for all customers to explore in the first weeks. There's a full bar on both the first and second floors and Popernack expects to have eight or nine of his taps flowing with a variety of his beers on opening day. 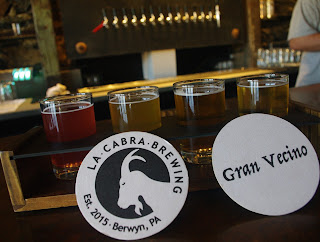 (Flights of great taste at La Cabra.)
My initial samplings confirm that there will be a diverse representation of quality beers for customers to look forward to both at the bar by themselves as well as paired together on the dining room tables. The Coquette (3.5% ABV) is a wonderful display of berries in a barrel-aged fruit beer. Should work well as a light refreshing interlude (i.e. not overwhelming with fruit) or in pairings as a breakfast or dessert beer.

Belma (5.7% ABV) is a Belgian Pale Ale that takes advantage of a new experimental hop from the Pacific NW. It helps bring out a light fruit character, strawberry for one, in a very drinkable Belgian Pale. Juno (4.8% ABV) is an American Blonde Ale with Rosemary and Lime that I expect to work very well with some entries on Hearn's Latin American-themed kitchen menu.

Two IPAs should please the hop heads. One is the Tabula Rasa, deemed a Session IPA, which will be different from batch to batch and always feature a single hop. The one I tasted (4.4% ABV) showcased the always enjoyable Mosaic. The second is Leo (6.3% ABV) that Popernack is still working to find the balance in malt and hops that he is most happy with. I think he's nearly there and this will be turn out to be a great go-to IPA. 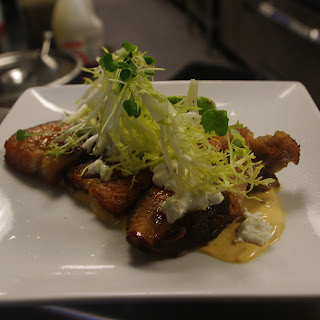 (Sneak peek, and taste, of the excellent Crispy Pork Belly to be on the menu at La Cabra Brewing Company in Berwyn, Pa.)
Finally, the Cassiopeia (4.8% ABV) is an "Amber Kölsch" that Popernack is looking forward to making his own style and one that I'm looking forward to sampling more of. It definitely bucks the traditional Kölsch style guidelines but yet when I drank it along with the Crispy Pork Belly that Hearn brought out of the kitchen for me, I found myself not giving that a second thought. The roasted nature of the Cassiopeia worked nicely with the pork belly (great ratio of meat-to-fat -- very important to me) as I would imagine so too would the Roggenbier that Popernack says will be coming up in the near future.

Lots of intriguing promise awaits in Berwyn. Just a little over a week until we get to see the full production. By the way, in case you didn't pick up on it in my last update, if you're coming out from Philly by train, get off at the Berwyn station and simply cross over Lancaster Avenue that parallels the train tracks and you're there. 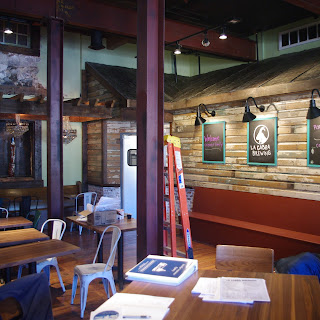 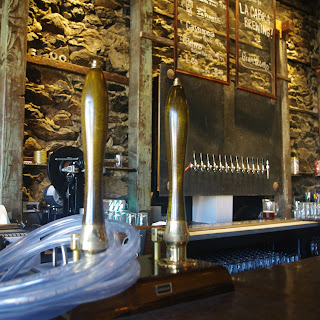 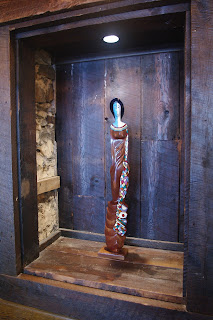 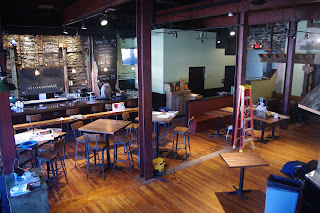 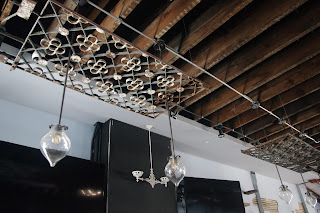 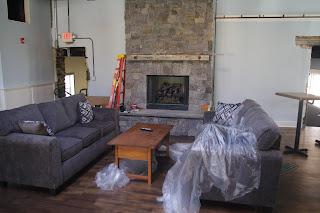 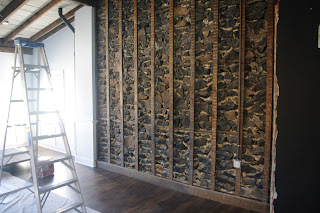 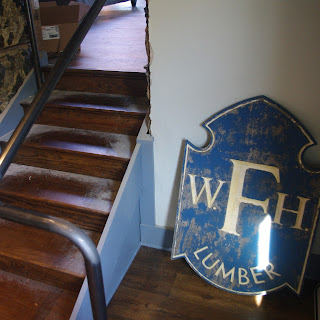 (Memento from the now-shuttered Fritz Lumber, since 1863, across the street.) 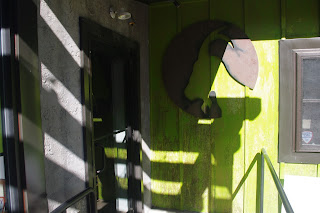 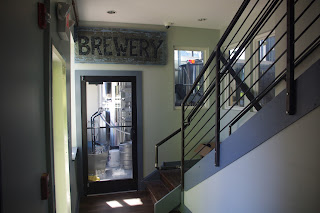 (Back staircase and brewhouse entrance of La Cabra Brewing Company in Berwyn, Pa.) 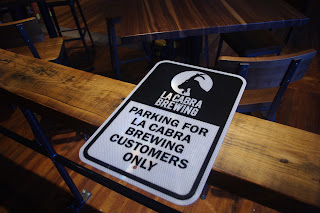 (Fear not, there will be available parking in Berwyn.) 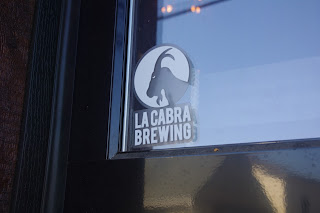 (Soon there will be a much larger sign announcing the new La Cabra Brewing Company in Berwyn, Pa.)