Contrary to my notes below, I did get out of the house last week. But, there was plenty to do around the house and yard, therefore the kegerator's taps were flowing freely. And I wouldn't have these three on tap if they weren't solid. And how about that homebrew from 2010? Still surprising. 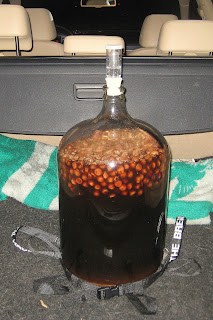 (My homebrew in its early development stages.)
~ Chocolate Cherry Imperial Stout (~11%), by The Brew Lounge (in the western suburbs of Philadelphia, Pa.)
Who knew 53 twelve-ounce bottles could last so long? For starters, it didn't lose its harsh sour cherry edge and show off its rich chocolate characteristic until nearly a year post-bottling. Then, consider it's a roughly 11% ABV beer, bursting with cherry and chocolate flavors; it's more of a sipping sharer than a chugger. This was my second-to-last bottle and I was so impressed by how decently it had held up that I selfishly figured it warranted a place on this list. I don't have a lengthy homebrewing resume, even to the point where I would say it's not fair to other homebrewers to call me a homebrewer, but with results like this one (and the one remaining bottle) I have a decent track record. Now...when will I drink the last bottle? 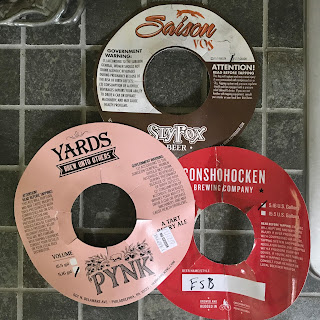 (Answer to a Jeopardy clue: What are three stellar local beers on tap in my house right now?)
~ Puddlers Row ESB (5.4%), by Conshohocken Brewing Company (Conshohocken, Pa.)
This sixtel has been on tap at The Brew Lounge twice before. Been a favorite of mine since they opened in 2014 and they've won national recognition for it in competition. A very well-made beer perfect for the segue between the end of a hot summer day and dinnertime.

~ Saison Vos (6.5%), by Sly Fox Brewing Company (Pottstown, Pa.)
A favorite of mine for longer than the ESB if only for that it's been brewed that much longer than Conshohocken's beers. They're both well-made in their own right. This sixtel has shown up at least a half dozen times, maybe eight or nine times since the kegerator went live on the sunporch. My go-to local Saison, though to be fair, quite a few others are encroaching on that list.

~ Pynk (5.5%), by Yards Brewing Company (Philadelphia, Pa.)
Not too many fruit beers make my best-of lists. Even fewer would ever qualify for a full 5.16 gallons inventory at Chez Kolesar. This one from Yards is a slightly, but refreshingly, tart one and chock full of raspberries and cherries and is also a significant annual fundraiser for the Tyanna Foundation. Time and thirst permitting, there could be a second sixtel on tap before summer's end. 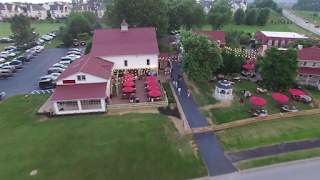 ("Levante at The Stables" in Chester Springs, Pa. -- Photo courtesy of Levante Brewing Company)
~ Clean Living Saison (5.5%), by Levante Brewing Company (West Chester, Pa.)
Did someone say refreshing? That's what this Saison from Levante is serving up, with a nice, but not overwhelming, dose of lemongrass and ginger flavors. Had this at their new outpost for Levante beers, called Levante at The Stables, which is also home to at least two food trucks and a side food operation from Split Rail Tavern. The thing is a bit of a joint venture, one of which details I need to, admittedly, learn more about. Quite a suburban/rural undertaking on this striking, nearly 200-year-old, farm property with plenty of parking, entertainment, and room for the kiddies to roam.