If Beer Weeks can define a week as ten days (or eleven this past year in Philly?), then I'm going to take the liberty of defining my last week of favorite beers as covering 21 days! What can I say? Have I been slacking? Not at all.

Been busy on many fronts, including two weeks of travel to Winston-Salem, NC — you'll see below how that turned out to be such a worthy destination. The first week of this three week period did not have much to write home (or to you) about. But the last ten-plus days certainly made up for it. Read on and let me know if you agree. 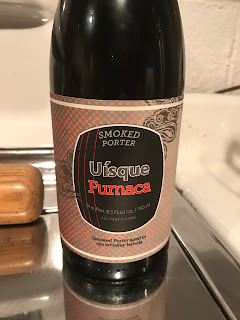 (Rich, full, and balanced flavors in a big bottle.)
~ Uísque Fumaça (7%), by 2SP Brewing Company (Aston, Pa.)
The brewery's website lists this under "Special Beers" and it certainly earns that right. Head Brewer Bob Barrar finished this smoked porter in both Cabernet Sauvignon barrels and Rye Whiskey barrels. My personal preference says the quality and the depth of flavor wins with the super smooth and perfectly balanced whiskey version. 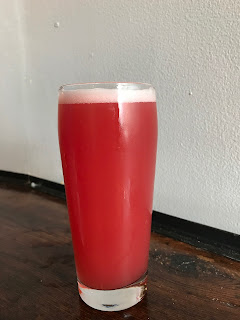 (One of the most distinctive looking beers I've had in some time. The color gives this one away.)
~ Ghost Station Berliner Weisse w/ Raspberries (4%), by Crime & Punishment Brewing Company (Philadelphia, Pa.)
It's all berry, all tart, and all refreshing. Perfect for summertime and perfect at 4% ABV. Had this during the brewery's 2nd anniversary party. It's the only beer I ordered twice. I love the inspiration behind C&P's beers and naming. With Ghost Station, on their website they describe it as being "Named in honor of the secret trains that ran between East and West Germany during the Cold War. Brewed with 126 pounds of red raspberry puree..." 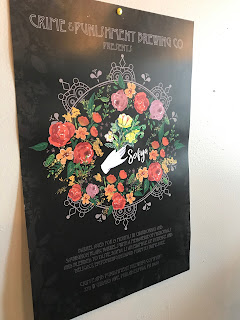 (A work of art, both on paper and in the glass.)
~ Sofiya (6.1%), by Crime & Punishment Brewing Company (Philadelphia, Pa.)
Lot of very good things happening (or shall I say, brewing) at Crime & Punishment on Girard Avenue. The brewery's first foray into bottling coincided with the anniversary and upon bringing a bottle home with me and later diving headfirst into it, I can report that the barrel-aged Saison (in Chardonnay and Sauvignon Blanc) turned out very, very well. 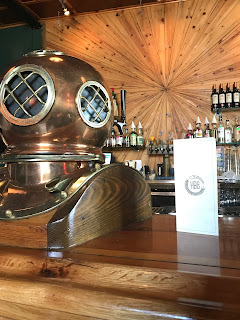 (Comfy and inviting environs in which to enjoy a Dark Mild, ESB, or Dry Stout.)
~ Dark Mild (3.7%), by Hoots Beer Co. (Winston-Salem, NC)
Once you find Hoots in Winston-Salem's historic West End neighborhood, I challenge you to make it only a short visit. There's no food at the brewery, but the adjacent family-friendly Mexican restaurant - The Porch Kitchen & Cantina - has that covered with ease and you should not miss that either. At Hoots, brewer Dave McClure's (of award-winning brewing history at Foothills and Red Brick) Irish Dry Stout and the ESB are phenomenal, but if I was sessioning the evening away (or the day, for that matter, why not?) the Dark Mild is what you'd find in my hand. Guaranteed, and that's a challenge that I'm willing to take. 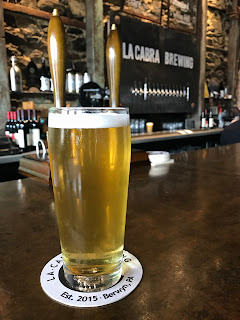 (Photogenic bar for a picture perfect beer.)
~ Sorachi Grace Saison (4.8%), by La Cabra Brewing Company (Berwyn, Pa.)
Been a couple few too many weeks since I'd last been to La Cabra. That was thankfully rectified and I was justly rewarded with a nice herbal and citrus balance in this farmhouse ale. 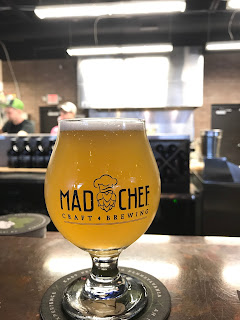 (A lot to like about this airy brewpub outside of Lancaster.)
~ Frican Saison (6.2%), by Mad Chef Craft Brewing (East Petersburg, Pa.)
Rounding out my three 2-year anniversary parties in three weekends as Mad Chef in the middle on July 22. Their food, as much as their beer, continues to really impress me. So, do I put up the American IPA (6.3%), the Frican Saison (6.2%), or the F-18 IPA (6.3%) up as my favorite of the week? Tough call, but Saison is unmistakably my favorite year-round go-to style. At Mad Chef, brewer Sean Raney has nailed it. If you're anywhere near Lancaster, Mad Chef should be on your list of three breweries to visit. 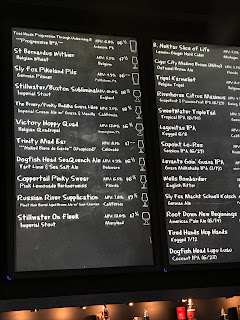 (Just your run-of-the-mill Monday draft board at TJ's.)
~ Supplication (7%), by Russian River Brewing Company (Santa Rosa, Ca.)
We're fortunate in the Philly area to have access to a near year-round supply of beers from the vaunted Russian River from California. When this sour cherry ale, aged in Pinot Noir barrels, can show up on a random Monday at TJ's in the suburban town of Paoli, yeah, you know were fortunate. This, btw, is likely my favorite from the brewery's sour side of the menu, as it sports the trifecta of brettanomyces, lactobacillus, and pediococcus while spending a year in the barrels. 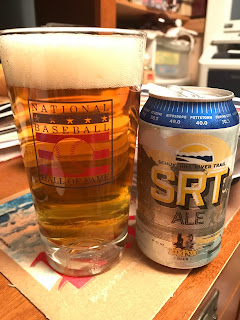 (Solid summer beer to enjoy all day long.)
~ SRT Ale (4.6%), by Sly Fox Brewing Company (Pottstown & Phoenixville, Pa.)
I recently picked up a sixtel of Saison Vos, the beer that has appeared in my home kegerator more than any other in the seven years of proud kegerator ownership, and while at the brewery also was fortuitous to come home with some canned Hop Project 002 and SRT Ale. The SRT makes an annual appearance in the spring and draws its inspiration from the SRT (Schuylkill River Trail), to which proceeds from this beer's sales are donated. It's a low-alcohol, hop-forward ale that I'm sorry I did get to sooner than mid-summer. The Hop Project is packaged in 16 oz. cans with the removable lid. This version in the series/project is sporting Centennial, Simcoe, and Denali hops and goes down all too easily. 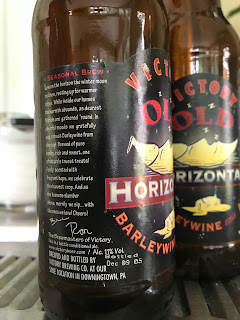 (Two Old Hos hanging out together, one from '05 and the other from '06.)
~ Old Horizontal [2005] (11%), by Victory Brewing Company (Downingtown, Parkesburg, & Kennett Square, Pa.)
If you follow me closely on social media (and, duh, why wouldn't you?! I use social media much more responsibly than some people. **handy FB link and Twitter link**), you may have noticed I've been working my way through a whole bunch of vintage beers. Many of which have very little business still being around 10+ years after bottling, much less five. This "Old Ho" from Victory has actually held up rather well after nearly 12 years. Not too much sherry or oxidation notes. Poured carefully to leave behind the sludge (though, surprisingly not too much), this is still a nice rather rich drinking barleywine that has held up similarly to certain Brooklyn Monster and Sierra Nevada Bigfoot barleywines. 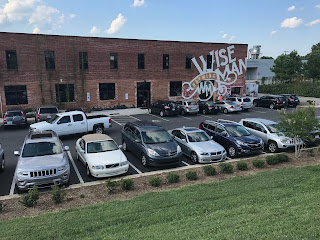